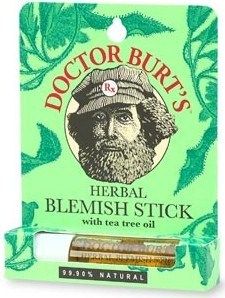 This stuff is the bees knees. It simply works. Stinky? Yes. Smells like a black licorice flavoured alcoholic beverage. My husband always used to ask me if I had been drinking Sambuca when I used this. Stings? Maybe a little but only for a second. What I love about it is it dries out the zit for sure, but not the skin around it. A lot of acne treatments I cant use because they burn my skin off, which in turn looks worse than the actual acne. I used this for years and years and it always worked. Stopped using it a couple years ago, tried other things, will never stray again. I like the roller ball. I know some people find in unhygienic-personally I don't care. It goes quickly if you use it a lot. Sometimes too much comes out at once, sometimes not enough. But I'm telling you it works amazing. Especially on pimples that are still under the skin...draws it right to the surface...fries it...and then the skin can heal and you can move on with your life. magic

Slightly burns but nothing I can't tolerate. I have super sensitive skin and the rollerball application is a little too rough for me but with a gentle hand things are ok. I use this day and night on different spots that I see. It keeps my oil under control while preventing me from getting little whiteheads through out the day or night. I apply this to clean skin only seconds after cleansing and toning to ensure that bacteria doesn't transfer.

This is the best blemish remover EVER! I have really sensitive combination oily to dry acne prone skin and this works great! It got rid of those deep cystic pimples too. I used as directed and it cleared up my face. Now I only use it on the spots I need it. It smells like licorice and fennel... Then the smell fades away just like the pesky zit it was applied to. :)

I was on a hunt for a natural tea tree oil, when I noticed this blemish stick. This is basically a &quot;greener&quot; equivalent for the Body Shop's tea tree oil - except the one by Burts Bees is waaaay better! It basically has a roller-ball packaging and you're supposed to re-apply the oil over your blemishes throughout a day for a desired healing effect. This product definitely works, but is quite subtle. So say if you don't suffer for anything major (like acne) and just want to ensure a better spot-healing - go for it. You can read more about this product through a detailed beauty review below. Hope it helps! http://www.partyparrotblog.com/#!Monthly-Favorites-Feb-16/cmbz/56be1dbe0cf2b4e0b6271b63

I love this little handy thing. A week or so ago I had 3 zits on my neck right under my chin at the same time and I picked at them and squeezed until they were sores. I bought this and started applying it in the morning and now it's been 3 or 4 days and there's no trace of them. It's not a miracle worker, but it does speed up zit time. it does sting a little at first because it contains alcohol, which dries the zits up. It smells like black licorice which I happen to love, and I love the little glass rollerball tube.

I had never used Burt Bee products before this and I must say I am so impressed with how natural yet effective this product worked. I had an ugly lip pimple that persisted from November 2014 all the way to January. It rang in the new year with me. It was very inflamed and I had tried everything. After browsing in CVS a month before I came across this product and was drawn to it because it had tea tree oil. And had heard so many wonderful things so i purchased it and I tested it on my cheek before applying it to my sensitive already fire truck red lip. It stung and I threw it aside as too harsh for a lip pimple. Four weeks later emotionally drained and fed up with the limple i continued internet searching for cures. Natural cure sites praised parsley and tea tree oil and i noticed those were two ingredients in the burts bee blemish stick so armed with hope and the blemish stick i doused my pimple in it. It didn't burn because my lip was well moisturized just a little tingling due to the ingredients and we always attribute tingling to oh the product must be working so i took as just that. I am guilty of overusing products thinking more is more and results will come quicker so admittedly i was rubbing that burts bee on my lip like ten times a day. Probably a no no for sensitive skin and will lead to over drying but apparently that's what my pimple needed because by the next day it had shrunk. Day two resulted in less redness. Day 3 i wanted to step my pimple blasting game up some more so after my mother said nutmeg is good for reducing inflammation id zap my pimple with the burts bee in the day and at night apply a water and nutmeg paste. By day 5 i was looking in the mirror like where am i applying this again. I am so pleased with burts bee blemish stick its been a miracle worker especially since that pimple on my lip was one that could not be popped although i could clearly see the white stuff. I am still in awe at the quickness of this product and will now be looking into more burt bee products. The only negative is the roller bar packaging which makes application easy but also extremly unsanitary. However this can be fixed by using a qtip to apply the liquid rather than putting the ball directly on the infected area. Also a lot of people commented on the scent and found the medicinal scent repulsing but i found it invigorating and refreshing. But it definitely is a strong aroma. Overall i love this product but i will continue to only use it as a spot treatment.

There are products better than this one, and there are products worse than this one. It has a stronger black licorice scent, but it goes away. It can sting a bit too. It dries out pimples/skin if you use it too much, but it reduces redness a bit. Nothing too special. I'm keeping it around just to use anytime I get really crazy dark red zits until I find something better.

This isn't great for very acne-prone skin. For the occasional blemish, it helps a little. It's not a miracle product. Average acne spot treatment. Not bad, natural, and inexpensive, but I won't repurchase. Still on the hunt for something that will cure my acne.

It only seems to work on single pimples, not overall acne. I only have single pimples that pop up from every now and then, and each time this roller stick has saved my day! Yes it might sting a little and it smells very strong and alcoholic, but it works well AND quickly.