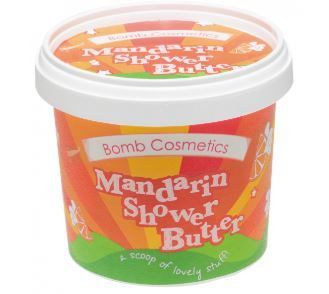 I had a love/hate relationship with this shower butter. Whilst I absolutely LOVED the scent (really fresh and clean like ripe oranges) and the fact that it left my skin feeling super soft, the whole process of using it was just so fiddly! First off it comes in a pot with a lid, which is almost impossible to get off when you have wet hands in the shower/bath. Secondly, once the lid was finally off, the product was so solid it was often difficult to get any significant amount out to use. Once I had managed it, actually using it was just as fiddly. I tended to smooth this all over and then add a little water to help get the lather going. The only problem was, doing it this way meant a lot of it ended up in the bottom of the shower/bath and subsequently down the drain. I did try using it with a shower scrunchie a couple of times, but it wouldn't lather properly and just got stuck in the folds of the scrunchie. On the basis that I have shower gels in easy to use bottles that smell just as nice as this and are a LOT less hassle to use, I wouldn't be tempted to repurchase this. It smells amazing but the whole process of using it is just too fiddly, especially first thing in the morning when I'm trying to get ready for work!