On the Rise Volume Liftscara 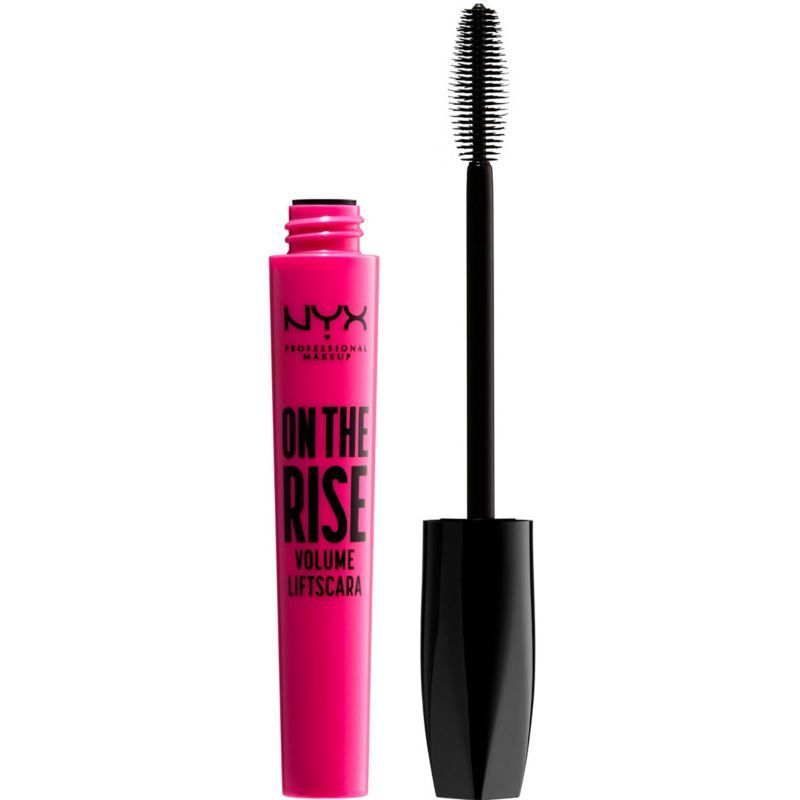 I really liked the look this mascara gave my lashes - very natural, separated, my lashes but better. However, this smudged under my eyes. I really wished this worked for me but the raccoon eyes are a no-go.

I was really looking forward to trying this product, after many youtube reviewers gave it two thumbs up. It took a while for my CVS to finally stock this, so I was very excited when I finally got my hot little hands on it. Today was the day! I put this on at noon, and merely 4 hours later, I opened up my compact and saw that I have racoon eyes already!!! Four hours!! Plus it's winter and I didn't even go outside. Oy vey! Shoulda went with the Cover Girl. Wah wahhhh. Oh, I guess I should mention that the volume and length seemed just average to me, and I didn't notice any particular curling or lefting, either.

It works deep color. the formal is gooey over time though. i love the brush. easy to apply. would buy on sale again. It really does make your eyelash "POP" and that how i like my eye makeup. Think doll like. so not for those looking for natural look and it flakes a bit I will admit. I always do a vitamin e coating on my eyelash before i even apply so it help with the flaking and it is a bit tough to remove.

ETA: Had to come back on here and update and drop a lippie - I believe this mascara was giving me some eye/contacts issues. I noticed in the mirror that this was starting to flake around my undereyes and I'd been having constant issues with one of my contacts bothering my eyes, like something was in my eye. I stopped wearing this and switched to my regular mascara combo (elf lengthing topped with covergirl exhibitionist) and by the end of the next day - my issues with my contacts stopped. So if you have sensitive eyes/wear contacts - take note. This formula flakes and it may get in your eye and stick to contacts and cause issues/irritation. ---------------------- Got a sample of this with an Ulta order and its a decent mascara. The wand is a bit large for the sample, so its a bit goofy to apply, and it has the stiff spikey plastic brush, so its a bit scratchy. However, it defines lashes well, isnt clumpy, and gives my lashes a nice ‘awake’ look. Nothing super emphasizing (like BTS or the dupes, Lash Paradise or Exhibitionist) but a nice clean every day look. Ill use this as my base layer, and then go in with another as a topper for more oomph. However, for $9 at most superstores, I can buy my HG elf mascara for half the price, so I would only repurchase if on sale.

This is probably the best mascara I've used within the past few years, according to my personal tastes. I have thick, short, VERY stubbornly straight lashes. My lashes are so straight that they basically point downwards. I always curl my lashes before applying mascara, but 90% of mascaras cause them to droop back down. This one is the only one I've tried recently that isn't waterproof and actually holds my curl up. It also adds length and separates, which is what I look for.

I am typically too lazy to write reviews but I am really impressed with this mascara. It gives some decent length and volume but what I really love is the curl I get, even without an eyelash curler. No clumping or smearing and a slightly drier consistency (which I prefer) makes this holy grail level for me.

Edit: I knocked this down two lippies. Within a couple weeks, this gets incredibly goopy on the wand when pulling it out of the tube, and it's almost impossible to wipe it off without wasting a ton of product. But if you don't wipe it off, you'll have globs of mascara on your lashes. It still builds volume and looks nice after some damage control, but I'm looking for a one-and-done type of thing, not a mascara that requires q-tips and micellar water to clean up after application. I don't know if it's the packaging or the formula causing the issue, but it's really disappointing, since it started out as such a great mascara for me. Back to CG Exhibitionist, I guess! I really enjoy this mascara! One coat gives me natural-looking, fluttery lashes. Two coats brings them into baboom territory. I don't even feel I need to curl my lashes when I wear this; it does the job for me. I max out at three coats because I don't want it to get clumpy, but even at three coats it still gives me those wonderful doe eyes that I so crave from a mascara. This has definitely topped Better Than Sex, Lash Warrior, and Exhibitionist for me. The wand is a little spikey, but that's to be expected from a plastic brush. I like the separation that I get from this wand, and it really grabs even the weird lashes on the outer corner of my eye that seem to dodge every other mascara wand on the planet, so it gives me a nice fanned out look. The packaging also feels secure, even if it does look a bit tacky and cheap. The formula is wet, but not gloopy at all. I usually steer clear of wetter formulas, since they rarely do more than darken my lashes and stick them together. This is definitely an exception; I actually find this formula to build beautifully and never looks tar-like. It's $11, which is creeping up there in terms of drugstore mascaras, but it's still half the price of Better Than Sex, so I'll take it. It's a great, vegan mascara that doesn't flake or smudge, and I'll definitely be repurchasing.

I received a free sample of this mascara, which normally retails at $11. Not too bad of a price. The mascara layers nicely and feels very soft. The short, hard bristles on the applicator made it a very easy application. The only issue is that my lashes are so weak and straight that applying mascaras that are not waterproof will undo the curling. This mascara is no exception in that respect. If your lashes are not weak this will likely be an excellent mascara for you. I was only able to successfully maintain a curl by applying a small amount of waterproof mascara before layering this mascara. I cannot recommend this mascara to anyone with weak lashes and for that reason I will personally not repurchase it. If your lashes will hold a curl with a normal mascara then I would recommend it.

I've been using it for 2-3 weeks now and I've also used it on one eye and another brand on another eye to compare with my best mascaras. This was slightly better than both. Less goopy than the better than sex mascara and didn't transfer to my under eye at all unlike my essence mascara, while still volumizing, lengthening and lifting my pathetic lashes beautifully. The packaging is hot and I got this for about $10 at walmart so I have zero complaints. So this gets an A+ from me.