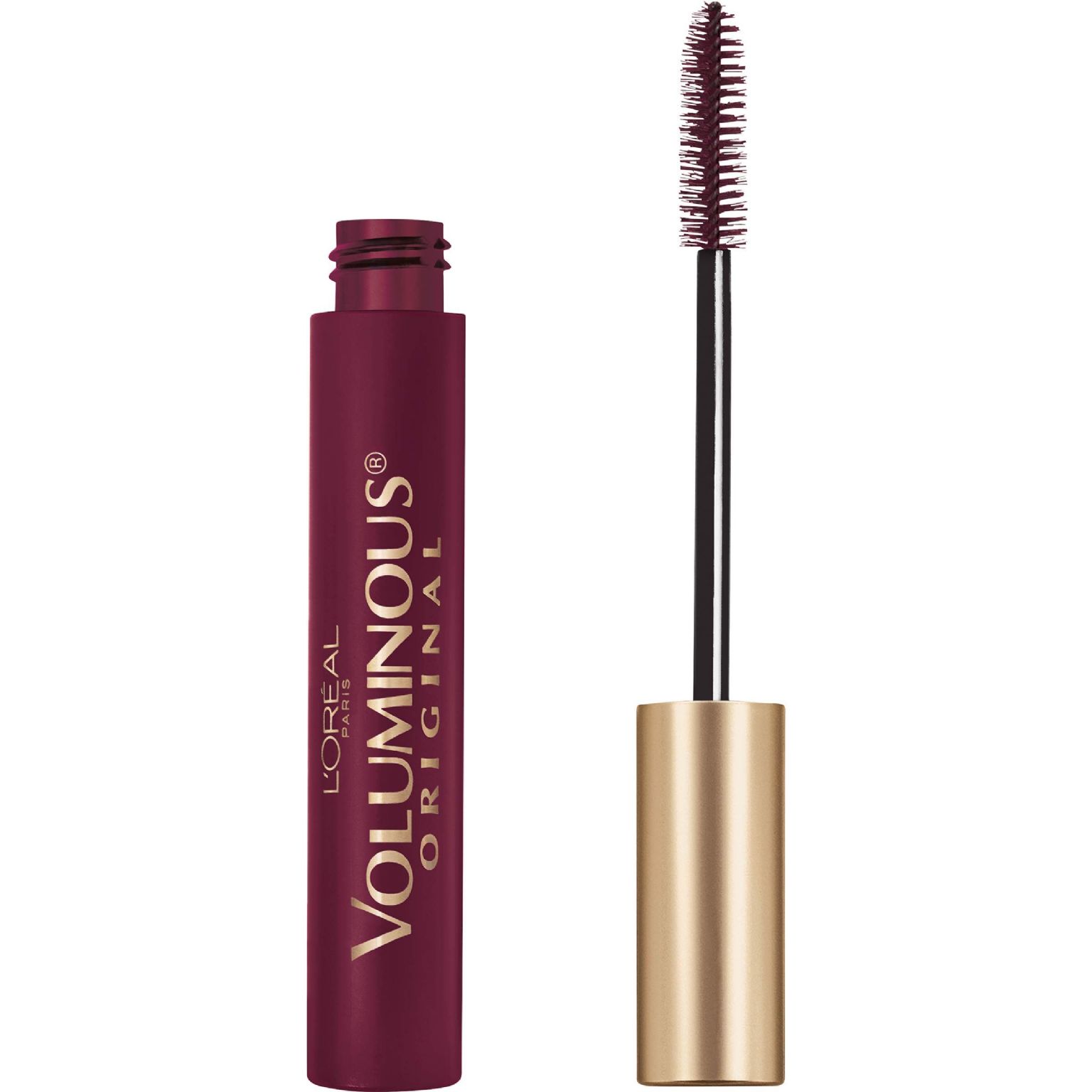 I like this mascara a lot. It's not perfect, but pretty good. I have green eyes and pale skin so I sometimes want something to make the green stand out a bit, ideally without making me look like I have allergies. This is more a browned red, or a wine-red-purple that leans dark instead of bright. The pros: The color is darker, and not super red. It veers close to a deep brown, so it's not garish. It is buildable. One coat looks natural, but a few more and you get more impact. It doesn't run. I've worn it to the gym and haven't experienced any streaking. It washes off easily. The cons: Maybe a tiny bit steep in price for a so-called drugstore product. (Fortunately there are sales) It takes a lot of layers to get real drama and volume. It can get flaky at times (with more layers). With a coupon and sale I got this mascara for something like $4.60, which is a good deal. For that price it's worth it, and I'd consider getting more, since it satisfies a jones for a more colorful mascara. Since my lashes are a light brown color naturally, I get some nice, but subtle color. I like it enough that I'd consider buying another tube down the line, preferably on sale.

I have very fair skin, blue eyes and blonde hair. Black mascara looks garish on me and brown is blah. Burgundy is perfect. I had been buying YSL's Burgundy which I really like but $32 per tube is expensive. I believe in replacing one's eye make up very month. If there is a favored home for bacteria, it is on one's mascara. So each month I would replace my L'Oreal primer and my YSL mascara and try to ignore the price. I was so happy when L'Oreal Burgundy became available and I have both the primer and the mascara on a monthly delivery schedule..............On a slightly different subject I want to mention blue mascara. Most of the blues available are a medium bright blue - garish. But the last time I checked YSL made a very dark midnight blue which was/is simply beautiful.

I was so thrilled when I saw this mascara in the drugstore! Just what I have been looking for! I like the original Voluminous mascara, but I have been looking high and low for a burgundy mascara. I have green eyes and a burgundy or plum mascara brings out the color in my eyes. I also have Auburn dark red hair, so my coloring gets a big boost from the burgundy. I used Benefit Bad Gal mascara in plum for years. It was the best plum color out there. But Benefit discontinued it some time ago and I have been looking for a replacement. This is even better and the color is more dramatic and noticeable. I love the mascara. The first time I wore it my hairdresser asked me what I was using on my eyelashes. It definitely shows up with my coloring. The mascara does not flake, goes on easily and coats my eyelashes well. Not only did I finally find the colored mascara I was looking for, it is also a drugstore brand and reasonably priced. I paid $19 for the Benefit Bad Gal mascara, but now I can get this mascara for about $8. This is a win-win for me.

This is a very pretty burgundy and if you are looking for a soft tint around your lashes, it's very good for that. I have been using it with the voluminous primer and getting better color payoff, since my natural lashes are fairly dark. Even on its own though, the color is still decent. As a mascara, it performs as well as one would expect from the famed Voluminous formula. It's a good mascara, no doubt. The color just wasn't fantastic on me. Since I have dark eyes with amber undertones, I had hoped for more "pop" with the subtle wine coloring. The overall effect for me was somewhat underwhelming. I think it would look fabulous on green or hazel eyes and especially on those with strawberry blonde or auburn hair. I won't be repurchasing as the novelty just wasn't a home run for me.

My review is for L'Oreal Voluminous in "Burgundy". The previous reviewer is reviewing something called "Marsala", and from her description, it is obviously not the same product as Voluminous Burgundy. This Burgundy mascara is very dark, and, on dark eyelashes, I doubt if it will even show up as burgundy. (Maybe if you shine a light directly on it?) It does show up as Burgundy on my lashes, but only at angles, and in bright light. So far, no one has noticed (or at least not commented) on this mascara. I was hoping this would be similar to Clinique's Black Honey, which, for some reason, comes and goes over the years. Colorwise, though, Burgundy doesn't have the same pay-off as Black Honey. When I wear the Black Honey mascara, my green eyes really pop, but the Burgundy doesn't have as dramatic an effect. Part of the problem may be that I have short, straight lashes. Voluminous mascara thickens my lashes, so it gives me short, straight, fat lashes. Without any lengthening and curling, mascara does nothing for me, so the Voluminous formula isn't for me in any color. On the plus side, this mascara doesn't flake or clump, and it doesn't really smudge. It seems to disappear from my bottom lashes after several hours. It removes easily with my usual eye cleaners. I can't really complain about a product that cost me under $6.00...my review is based on what I want for my mascaras. There is an add for this mascara in Allure magazine (which worked like magic and inspired me to buy this at once) that depicts a brown-eyed, dark-haired woman wearing this it. It looks AMAZING. I figured if it contrasted that beautifully with brown eyes it would enhance green eyes as well. The ad informs us that extra lashes are added on the model's eyes, but, naively, I didn't think about just how many extra lashes may have been added. After using this mascara, I'm guessing the model is wearing full fake eyelashes, soaked in layers of it. (Not to mention the professional lighting concentrated to bring out the hues.) If you have long, light eyelashes this may be great for you, but if you want lash "help" in addition to the burgundy color, this won't thrill you.

I adore the blue version of this and this marsala one does not disappoint! It’s a gorgeous shade on my dark lashes and brown eyes. I often like to use a cranberry shade in my crease as a quick eyeshadow look and this mascara is the perfect compliment. That being said, I fear this would look hideous on the light-eyed, flaxen-haired angels out there because it’s nevertheless a loud color that could clash with certain tones. But for POC, this is a great find!