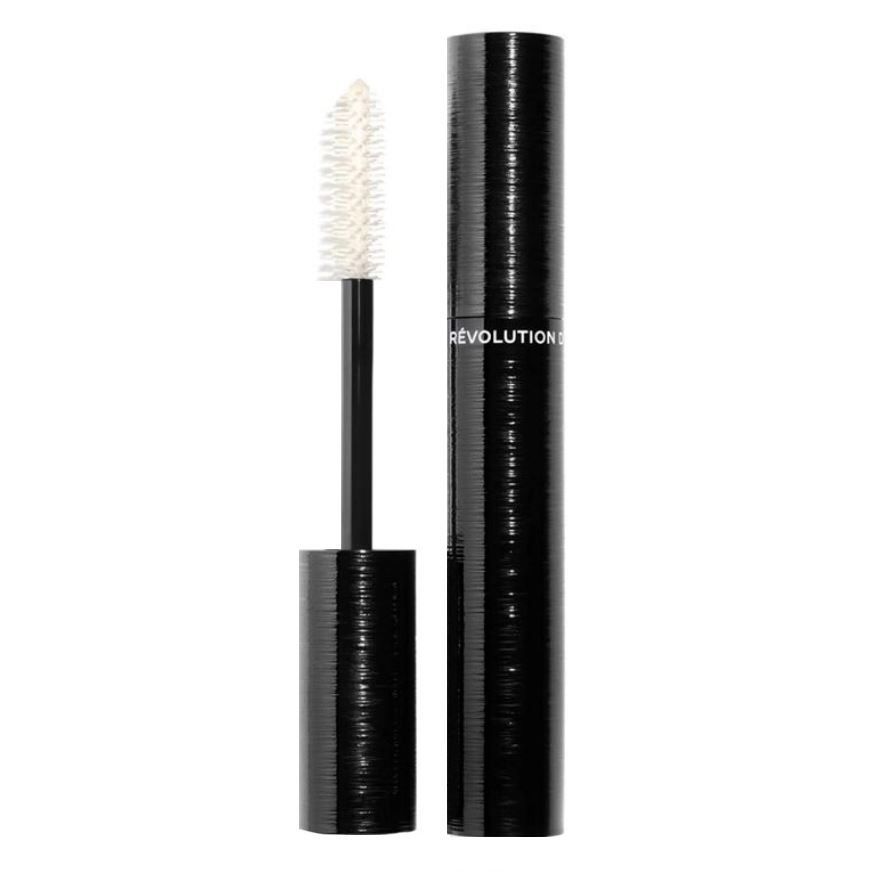 This is one of the worst mascaras I've ever used. I'm thankful that it was a promotional giveaway. The brush is useless for separating the lashes, with the result that the mascara goes on in clumps. After wearing it for an hour or so, I noticed that it was flaking onto my cheeks. It went straight into the garbage. SAVE YOUR MONEY AND AVOID THIS HIGH-PRICED JUNK!

this gives me more volume and drama than the Le Volume. i wore them side by side and the original Le Volume looks more natural, with more separation and gave me more length. This one gives me more oomph, intensity and i love it!!!! I used to be devoted to the orignal BUT, the Revolution is creeping up to become a favorite gives me intense color, curl, a lot of volume, not so much lengrh. I have long lashes but they are thin so i look for that va va vroom. this brush is bigger than the original. it is a little more spikey but i dont mind it too much. I must add, be careful applying too much of this mascara, it isnt as buildable as the original. This mascara only needs 1 swipe onto the lashes and it will give you the intensity of doing 2 to 3 coats of the original. Its designed to grab every lash and a &quot;1 coat done&quot; type of formula. I find it to be clumpy and spidery if used in layers. The original is a lot more buildable because it is a thinner consistensy. I am not sure which i like better, ill have to come back to report as i wear them both more. Edit, the revolution has heen flaking on me so back to the original Le Volume and Inimitable ntense

Already bought two back-ups (just in case) I bloody love this mascara. I still need to try the original version, but Revolution is absolutely brilliant for people who lack lash volume. I have naturally long, lifted lashes, but they can appear a touch sparse at times depending on what mascara I use. I do think that I need to go through my lashes with a lash separator (not a big deal for me personally), but this Chanel formula is easily the best one I've tried to this day. It lasts, doesn't smear/flake, adds beautiful color and body to lashes and it makes mine look as if I was naturally gifted in that department. It is a hard one to remove though, so make sure to go with oil-based cleansers. I do talk about some of the bestselling volumizing mascaras in a separate review here, for those of you interested (https://www.nayatilly.com/single-post/2019/07/27/Battle-Of-The-Mascaras-Best-Worst-July-2019) Hope it helps!

I have loved Le Volume de Chanel for years and I thought this would be like it, but even better. However, it has a cumbersome, sharp brush that makes application a chore. It does give black, thick lashes, but almost no length. You can get the same results from any drug store. And it seems to disappear as the day goes on. It just doesn't have the substance and lasting power of Le Volume de Chanel and so I will be going back to that rather than using this one. The brush is a marketing gimmick which doesn't work. This is not the worst mascara, obviously. I just don't like it because I expected it to be better, based on all their boasting. Update: I've used this several times now and even though it's a tiny sample and there's almost nothing left, the small amount of product left is giving me superior results. I am now used to the brush and I like it. I will probably buy this instead of Le Volume de Chanel. I was wrong in saying it's no better than a drug store mascara. I've compared photos and it doesn't come anywhere near the clumping and flaking and general uneven look of almost all drug store brands. I do believe the right technique has made this work like a dream. First I used a face cream so that it made a better canvas than dry skin. I built up the lashes using 3 coats and then let it dry. I put on a very light brown eye pencil and a tiny bit of pale blue and grey shadows. I applied concealer, powder and blush and highlighter. Then I added a 4th coat and it gave more length. With too much eyeliner the mascara can't be seen as well. Also the lip colour cannot be too dark. It has to be a neutral with some sheen, not red or coral. I've changed my rating because I have learned to appreciate this mascara. Note: The tiny sample is all gone, but I have used the brush to apply other mascaras which don't work, and it made them work. So I learned that some mascaras just come with a bad brush. This brush took some getting used to but now I see it is a superior design.

Like other reviewers have said, this mascara sucks. I usually buy the Le Volume and got suckered into trying the ‘new and improved version with the 3D printed brush’ by the sales associate. The brush is terrible, product clumps onto your lashes, gets all over your face, and the volume that you pay $40/tube for is nonexistent. Whatever you do, don’t waste your money - go for the original.

If you want drama - dark, rich black pigment with alot of volume and length plus helping it stay curled all day - try this Chanel Revolution Mascara. I LOVE IT! It is my HG! I will warn you though that it does smudge if you don't wear powder underneath the eyes. And after washing I am still left with a tad bit of the mascara smear under the eyes; hence I only wear this for special occasions. Cannot be bothered with the high maintenance everyday. But when i'm going out hands down i definitely reach for this! BTW I also LOVE the packaging! It's so beautiful to look at and the feel of it is also so wonderful - weighty and textured! Definitely repurchasing!

WARNING: This is NOT the original &quot;Le Volume&quot;. I was given a sample of Chanel Le Volume mascara and it was so good - one of the best mascaras I've ever had - that I thought I'd buy it. But somehow I ended up with this new version, marked 'Revolution' because of the 3D printed brush. Seriously, this is one of the most awful mascaras I've ever owned. The brush is so chunky it's like applying mascara with a space; the 3D printed design doesn't allow for the kind of separation a proper brush gives you, and as a result, you end up with tons of product in big clumps. It's messy as hell too and it goes everywhere. In addition to that, this mascara does not hold the curl, so even if you curl your lashes first, 2 minutes later they're already back to normal, weighed down by this useless gloop. I cannot believe Chanel has put out a product like this. It cost me £28 and I would have been better off with a £5 mascara from Rimmel. Avoid at all costs.

So I couldn't wait to try the new LE VOLUME RÉVOLUTION DE CHANEL extreme volume mascara with the world's first 3D printed brush. All I can say is it is just the same as any high street mascara, nothing special happened here at all. It took a good 5 minutes to build despite being quite thick. Result showed visible flaky clumpy bits and held no curl. Flaked off easily. I will stick with the Volume de Chanel or the Dimensions de Chanel in future. I think the gimmick is just the brush which gave no great effect sadly. Average scores. Feel a bit ripped off at the price actually.