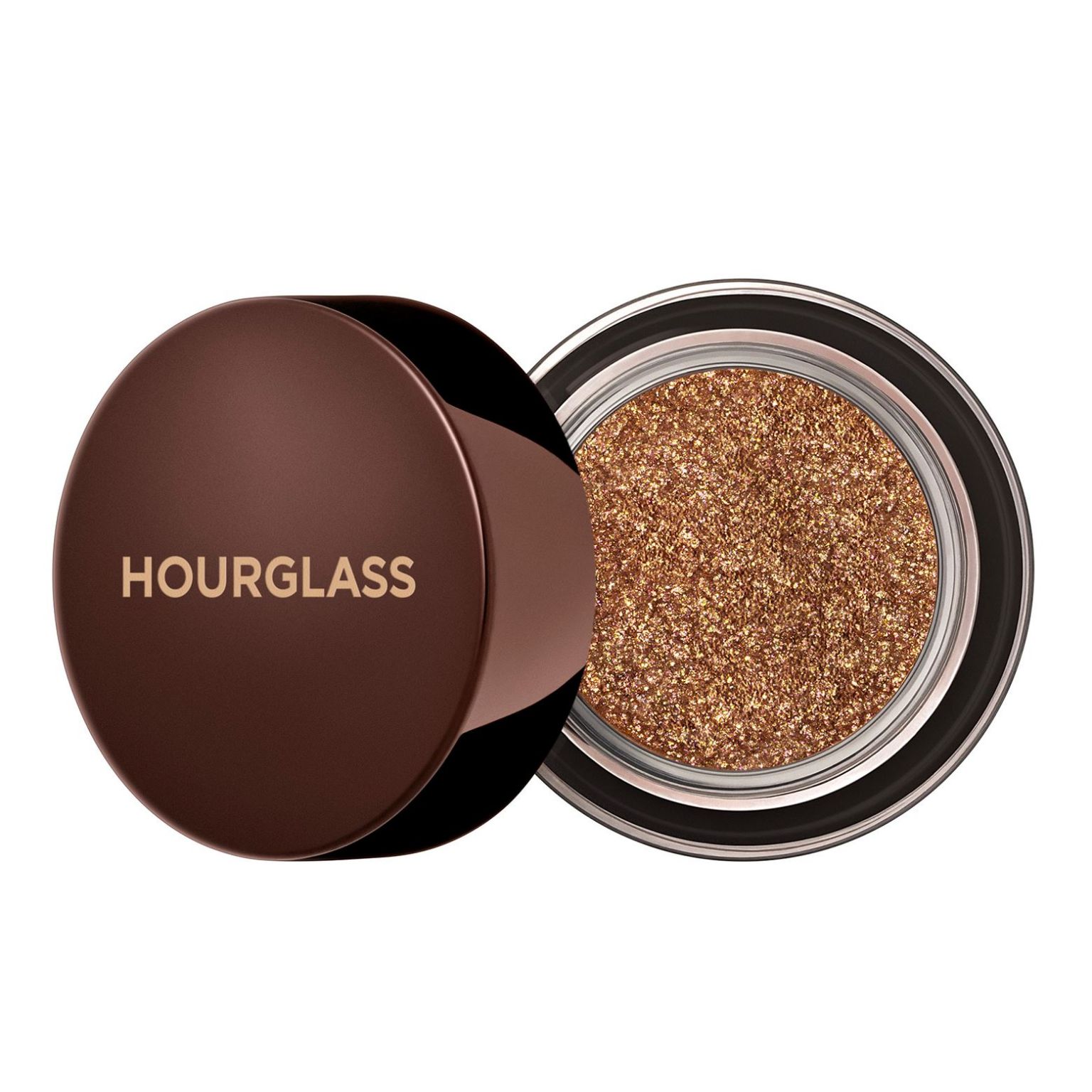 I got some of these around the holidays- I have blaze , a warm rose gold / copper, foil- gold, ray - bronze , and molten - a plum / burgundy shade . These go in well with fingers and gave a very pretty glitter that is not chunky. I barely have any fall out so I love that. The shades just shimmer on the eyes very nicely. I love them for easy swipe on pretty eye shade. I don’t mind using my fingers. I think they might fall off a brush more. They are similar to the texture of L’oreal infallible shadows. They are a bit expensive for single shade but if you like glitter these are beautiful. On my warm blue eyes I love ray and blaze the best.

I have two of these - Vivid, a goldfish green, and Stone, a silvery taupe. note to self: don’t determine pigmentation of eyeshadow by swiping a fingertip on or into it. It always looks pigmented on your fingertip. Swiping it on the wrist is the true test. These shadows look sheer, much less dazzling than in the pot, when swiped on my inner wrist. Unfortunately, I didn’t do this in the store, I was in a hurry and more focused on getting up to $125 so I could get the free Hourglass gift at Blue Mercury. Anyway, on the eyelids, you need a slightly tacky primer to get any real oomph out of them. It also helps to use a damp brush. They have very fine microglitter, but the fall out isn’t too bad. Usually with sparkly shadows, I don’t go over the whole lid. I use a satin neutral on the lid, my beloved Hourglass Nude Bronze Light in the crease, and then apply the Scattered Light glitter shadow with a damp brush (a thick liner brush) along the upper and lower lashline, sometimes over an eyeliner for more staying power, smudging a little extra going into the outer upper corner. That way I’m getting some color and some shimmer without it being too much. I find they last ok, not great, but you can still see the color after 8 hours. Some of it transfers up into the crease area, but it doesn’t look too bad. However, when I tried putting this over my whole eyelid, as a sort of one shadow eye look, I found that within an hour, the foiled shimmer had mostly disappeared and I was left with a dull version of how it looked originally. One has to take into consideration what I wear under the shadow - maybe eyecream, always sunscreen, and these can affect the way the shadow performs, even with a primer over them. I will continue to experiment and see what kind of results I can get, but for now, I’m fairly underwhelmed, and think there are definately more impressive choices out there when it comes to shadow formulas, ones that last and stay true to color and original finish. And cost a bit less. One thing I find odd is that the pot is plastic. Even inexpensive pot shadows at the drugstore are glass...so I was surprised when I realized this shadow is in a plastic pot. Seems a little chintzy.

I was obsessed with finding this e/s in the Smoke color, which was sold out everywhere for a while. Once i finally got my hands on it was underwhelmed. I expected the color to be more of a grey tone, given the name, but it looks more bronze-y to me. Not what I was looking for, but I was willing to make it work if it wore well on my eyes. It goes on smoothly and is quite shimmery/glittery, very pretty, but the staying power is really poor. My eyelids are oily and many e/s don't last long, especially without a primer, but the staying power of the e/s is shocking. Like within half an hour, it begins to crease, which is even rare for me. Regardless of the lasting power, I didn't find the effect to remarkable, meaning you could probably recreate the look with a different and/or less expensive product.

I was rather impressed with Hourglass' new Scattered Light Glitter Eye Shadow.  This is a very light gel texture that applies best with your fingertips, don't try to mess with using a brush because if you do so you will end up with a mess of glitter everywhere.  I also highly recommend using an eyeshadow primer.  Even with the primer toward the end of the day you might have a little fall out, but nothing too noticeable.  You can also layer this on top of other eyeshadow to create a custom look.  My video review can be seen here <object onclick="ga('send', {hitType: 'event',eventCategory: 'Ajax Interaction',eventAction: 'PlayVideo',eventLabel: ''});" width="360" height="320"><param name="movie" value="https://www.youtube.com/v/6aK2aTuKe7A"><param name="wmode" value="transparent"><embed src="https://www.youtube.com/v/6aK2aTuKe7A" type="application/x-shockwave-flash" wmode="transparent" width="360" height="320"></object>