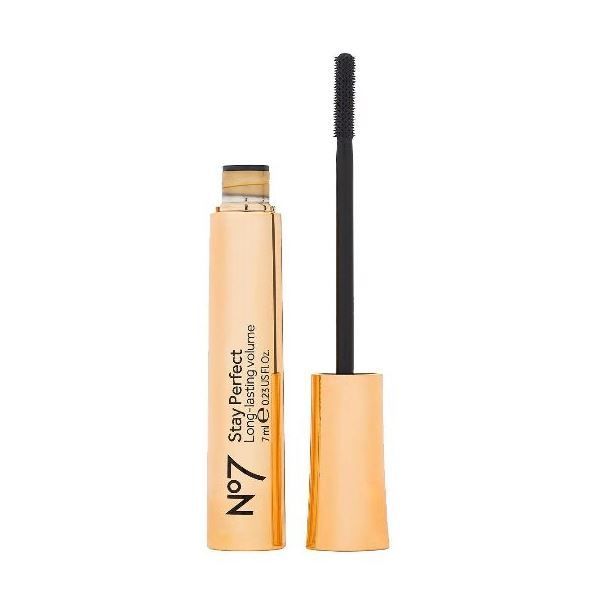 LOVE! At first I wasn’t sure I liked this mascara, but I am now on like tube 10! It is hard to find in the stores so that is a bummer. I am so happy to see it is still available though. I love that it does not smear and comes off so easy in shower. Once the tube starts getting old or low the mascara doesn’t go on great, so be sure to have a new one ready. I have tried to find other mascara, but this one is by far my fav!!! Thank you No 7!!

I don’t get the good reviews of this mascara!! I have used tubing mascaras for years and have to say, this the absolute worst one ever! It’s okay for the first application only. The minute the air hits the tube and/or brush, all you get is a flaky, gloppy mess of black pieces on lashes and under eyes. Actually embarrassing! IMHO, the best tubing mascara of them all is Kevin Aucoin’s Volumizing and Lengthening. Not the Curling formula. Also like Blinc Amplified and Clinique Lash Power. Bobbi’s Intensifying Longwear also good, but expensive..

My HG mascara. No smudging. No clumping. Long lasting but easy to remove. Cheap price and readily available at Target, Walgreens, ect. Love it. Will continue to repurchase as long as they make it.

First time I used this I experienced flaking, but I tried to use it on both my upper and lower lashes which seems to be a mistake. If I wear it on my upper lashes only then the formula is a solid performing tubing formula. It does feel a bit crunchy but not horrible. There are three advantages to wearing a tubing mascara: 1) does not smudge, 2) keeps lashes curled, and 3) easy to remove. So far, this one is the best of all I’ve tried, high end and drugstore and I’ve tried many (L’Oreal, Estée Lauder, Clinique, Blinc, Maybelline, Revlon, etc.). I won’t wear regular mascara because it transfers wickedly on my lids unless I use waterproof and that’s just not kind to my lashes. I have been wearing tubing mascara for so many years and I will never switch back. The wand on this one has short plastic spiky “bristles” but I think it’s actually the best way to apply the polymer formula that wraps around lashes perfectly to seal the tubes around each lash. This one is not available in Canada but where there’s a will, there’s a way, lol.

This mascara is a must for oily skinned girls. It just doesn't budge: no smearing, no smudging, and in my experience, no flaking (at least not a newer tube: past 4 - 6 weeks it's not so great but I'll ger to that later.) It's the ONLY tubing mascara I can wear on my bottom lashes and know that, come the end of the day, it'll be exactly as I applied it first-thing. I can't think of another mascara I've tried that does this that's still for sale: Clinique's now-discontinued Flutter-to-Full mascara was my former HG and the only other product I could rely on. I'd be lying if I said I wasn't upset about that loss for months (I'm still not over it. Lol) I've noticed this is a bit of a 'love it or hate it' product. If you need to wear a tubing mascara, then this ticks a lot of boxes, but if you don't, then it won't be nearly as good, so it's important to know what you're getting. The application process is a bit of a learning curve. Product from a fresh tube will go on really wet and has a tendency to clump if you let it dry between coats. It's at its best 1 - 2 weeks after opening, but as I said before, it doesn't last long, or at least not as long as I'd want for the £13 price point. I'm willing to compromise, though, because I think that's mostly down to the formula and I'll take a shorter tube life over panda eyes any day. It comes in black or black brown which is nice though I've accidentally picked up the wrong shade before and couldn't tell the difference once it was on. It took me 2 weeks to notice I'd even bought the wrong shade. The brush is quite small with small, plastic bristles, perfect for my sensitive eyes. I prefer smaller brushes for application as I think they coat more lashes. It comes off with warm water in gummy tubes which is quite alarming and can look like you're losing lashes: in reality, it's just to do with the way the product coats and sets on lashes and these tubes don't irritate my eyes on removal. Again, this is great if you need a tubing mascara, but if not, there are products that will give you better volume etc. I'm lucky enough to have long lashes, and this lengthens more than it volumizes and doesn't hold a curl all that well. My priority is no panda eyes, so if that's a priority for you as well, this is as good as it gets for the price point.

I've repurchased this once already, plus a backup! I remember trying out tubing mascara about 10-15 years ago (at least I THINK it was tubing mascara?) and it was nearly impossible to remove. This is MUCH better and completely different. Stays in place, even in the pouring rain, until I'm cleansing my face at night. I make sure to cup my hands with water and hold it on my eyes for a moment or two. Then it just slides right off onto a tissue or the shower floor, looking a bit like spider legs, but in a completely satisfying way. It's a fairly wet formula that glides on and lengthens lashes. Once you've had the tube a couple of months, it starts to dry up and not work so well by around month 3, but by then it's technically time to replace it anyway. It's a little difficult for me to find (I'm ordering it online from Target because I haven't seen it at my local store) and the gold packaging looks a little cheap to me, but otherwise I have zero complaints about this mascara. Thank you MUA for telling me about this product!!!

A win for sensitive eyes and board rec, esp if you are looking for a long-lasting formula without flaking/smudge under eye and lashes that do not feel coated in plastic. I'd never used tubing mascara before. Not that I have anything against plastic lashes as long as no irritation.The wand is on the small side and without curve. Picks up mascara well. Not waterproof. Like that is available at Target in US. As per directions, you must build quickly while still wet so you won't get a heavy application if that is your goal. Removal: Another win is it does not need an oil cleanse to remove. Splash with water until saturated to loosen and use cotton or a cloth to wipe away the &quot;tubes.&quot; I just lightly &quot;pinch&quot; them off as I have to follow up with an eye wash (have crazy thin eyelids that are prone to milia &amp; enlarged oil glands). Definitely recommend for everday wear. Special occasions where crying, rain, sports, or swimming involved, I'd go for the Heroine Make Long and Curl.

I build up using two other mascaras before I add this one, but it adds dramatic impact that stays all day.

1. It stays on. 2. It adds volume without clumping. 3. It peels off the way tubular mascara does. 4. It's very inexpensive.

Finally a tubing mascara that actually gives me a bit of volume too - I use on my puny bottom lashes as a base coat and after dry, go over w/ my Maybelline Full Lash and wham - I have visible bottom lashes that don’t flake off or give me raccoon eyes by days end. FL by itself seems to flake off, but somehow, No.7 gets it to stay so much better = have already repurchased. On days I don’t want to do a cocktail of mascaras, I will use this alone for a more natural eye look.