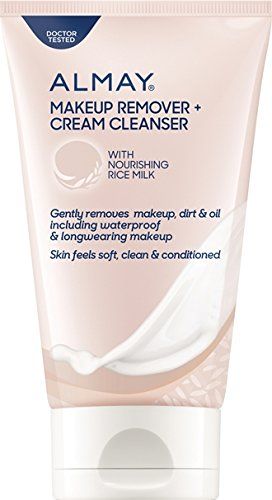 So let me start off by admitting that I coupon'd the heck out of this, and scored it for 29 cents (USD)... and I still don't think it was worth it. :( I thought I could use this like a melting cleanser. First strike was that it didn't remove all of my makeup. Even when I wore simple Maybelline Fit Me Matte & Poreless foundation (instead of Estee Lauder Double Wear), and regular, non-waterproof mascara. I had that lovely raccoon-face/Mulan-matchmaker look... and then uh, I kept it because this didn't actually finish washing off. Second strike was that it gave me blur-o-vision/drunk goggles by leaving a weird oily film in my eyes. It didn't burn my eyes though. I could maybe live with this if not for the complete trifecta of fails. Third strike was that is burned my face! Which is REALLY weird because my eyes were fine AND the other Almay makeup remover stings my eyes and not my skin. This actually burned my skin to the point of being red, stinging and dry. I got halfway through the bottle and gave up. I've been seeing it in TJ Maxx and Ross, which for skincare almost feels like an assurance of failure. I'd advise you to steer clear.

Nice gentle creamy cleanser that does not dry out my 54-year-old face. It removes all my makeup (though I don’t wear a lot). I go through it pretty quickly, however, so it’s not the cheapest drug store option out there!

I bought this because I was looking for a creamy cleanser that would remove my makeup (mascara included) and let me skip the step of using another product. I've used products from Almay before and a nice creamy one step type of cleanser sounded great. This is NOT that. The consistency feels nice on the skin; it is creamy, though it stung a bit. This could be from my retin-a and glycolic regime. I don't wear a lot of makeup basically some concealer and mascara. The fist time I used this product I had high hopes. But after massaging this into my face and paying special attention to my eyes to remove my mascara, and multiple rinses with warm/hot water, I blotted my face dry, only to find mascara - a lot of it - on the towel. It's probably the poorest performing product I've used to cleanse my face. I tried using it again in a steamy shower with the same result. I threw it in the trash. Don't waste your time or money.