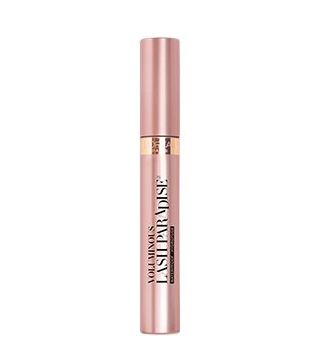 I have Asian stick straight lashes, and this mascara does not uncurl my lashes after curling. It provides enough volume for me, but I tend to prefer more natural look.

This is a new review, because my older one simply didn’t reflect the producy accurately, and I was concerned that an “update” would be lost, since the original was some time ago. This has become my everyday, tried and true, mascara. While my skin is dry, my eyelids are often oily, and I do use cream products under my eyes. Not only that, but I often tear up when I sneeze or cough. This stuff BEHAVES. And it does so without flaking or smearing. Or clumping. One coat yields a day-to-evening look: two coats is dramatic. I do have to wipe the wand tip on tissue before using, and I wouldn’t mind if the tip were a bit smaller to get corner lashes more easily. Small complaints for the payoff! My biggest gripe WAS that it was really tough to remove, even with Clinique’s Take the Day Off, or various two layer cleansers—even high end. I euspect that’s why some people have experienced lash loss. BUT, it comes off—dare I say, easily—with Deciem’s Hylamide High Efficiency Cleanser, or even more surprising, with Garnier Express 2-in-1 Eye Makeup Remover. Neither the mascara nor these removers bother my absurdly sensitive eyes.

NOT WATERPROOF... had a good cry and dotted with black flecks down to cheeks.

DO NOT BUY IF YOU LOVE YOUR LASHES I am a mascara girl and have been blessed with long and curly lashes. I have tried a lot of mascaras. I purchased this after watching Youtubers raving about how much they like this mascara. A dupe for Better Than Sex but cheaper, I was super excited. I fell in love with the wand, it gives volume while separate your lashes. Sadly, my happiness was not long lasting as this mascara. As usual, I removed my makeup with Banila Co Clean It Zero (Love this stuff btw) and noticed that a few of my eyelashes fell out. I shrugged it off thinking that I was being too rough, even though I followed my usual routines with every other water-proof mascara. The more I wear it, the more I realize my lashes are falling out. Today, when I was doing my makeup in the car and using a small mirror while tilting my head, I was HORRIFIED to discover that my eyelashes are short and very sparse. You guess it! This mascara is the culprit, I have been sticking to the same routine except for this mascara. My lashes just keep falling out whenever I try to remove this mascara. I am kicking myself for realizing this way too late. Save your lashes, get other mascara. Now I am using Rosehip oil to help with my fragile lashes. What's the point of using mascara to make your lashes look voluminous when the more you wear it, the less lashes you have?

Same as all the other mascaras, don't hate it but don't like it. Didn' smudge. But there are better cheaper mascaras with the same ingredients. Recently I talked to a chemist and he said that the price of the ingredients is about 10-50cent. Doesn't matter if it's drugstore or high end. They have 500-1000% gains lol. If you think about it it's just a rip off 🧐

I’m making a tour around drugstore mascaras that are supposed to be pretty good, so I picked up some Paradise mascara. I accidentally bought the waterproof formula, so here I am. I’m a bit mystified at the negative reviews, because I think it makes my lashes look great. I also don’t have to spend a great deal of time getting there, the formula and brush are both very cooperative. Ironically, I found that L’Oreal eye makeup remover doesn’t touch this waterproof formula, but it comes off very easily using Clinique eye makeup remover. This is something I’d happily keep around, if only to use on my lower lashes. I’m notorious for smearing the lower lash mascara, the waterproof formula fixes that problem. I’ll just make sure I always have Clinique makeup remover in stock!

I'll update this after using it longer, but I had to write a first-impressions review because this stuff is amazing. I avoided trying the regular or waterproof versions of this stuff for so long because I'd heard it was a dupe for Better Than Sex which is one of my most hated mascaras ever (it was a clumpy, flaky nightmare). But, I was desperate and needed a waterproof mascara fast, so I crossed my fingers and prayed I wouldn't have a reaction to this one as I bought it. My lashes are kind of sparse, are normal in length (maybe a tiny bit long-ish), point straight and down (a mix of both on each side), and almost never hold a curl. But this stuff? It keeps my curl all day. I think the longest I've worn it is 14 hours, and my lashes still looked fake when I took my makeup off that night. I've never had a mascara perform like this one, and I've been wearing mascara for almost 20 years. They're thicker, longer, and not gross-clumpy (this does kind of clump, but in the good way, not the way that leaves you with like 3 giant lashes because they're all stuck together). It seriously looked like I had false lashes on. I have this in Blackest Black, and it is a very black color, which I love. I also think it can be built up with two coats, but I think after two it would be a clumpy mess. The two downsides I've found are that it's really hard to remove (I've tried a cleansing balm, cleansing oil, eye makeup remover that usually works for waterproof stuff, and micellar water), and it does flake a tiny bit. Next time I wear it, I'm going to try a little coconut oil to remove it, which I think will take it off easily. The cleansing balm and oil both worked, but I had to really work the balm into my lashes for a long time before it all came off. The flaking is not super bad, and I didn't even notice it until I leaned in close to a mirror. Usually, if a mascara flakes, it gets in my eyes and they get really irritated from it, and I'll have big flakes all over my face. With this one, it was a few teeny tiny ones, right below my lower lash line, and they were easily swiped away with a makeup brush or my finger, without it messing up my makeup. Pros: -super black color -holds a curl all day -mega volume and length -nice brush shape (kind of hourglass; not too big) -looks great on my top and bottom lashes (one coat on bottom, two on top) -hasn't irritated my eyes so far -dries pretty fast -I think you could probably swim in this and it wouldn't budge because it is super waterproof -despite being difficult to remove, I haven't lost any lashes while taking this off like I usually do with stubborn mascara -formula isn't super wet or dry (it kind of makes me think &quot;mousse&quot;) -doesn't make my lashes feel crunchy and dry Cons: -very minor flaking (almost un-noticeable and easily wiped away) -you probably should use an oil to remove it, because once it's on, it is ON and very hard to remove

I tried the regular Lash Paradise about a year ago and didn't like it. I have straight lashes, so curl them, and the original just took any curl out of them. I'd heard the waterproof version was better for curled lashes, so picked up a tube since the reviews were so good. I've been using it for about 3 weeks, and I'm not that impressed. It's definitely a black black (good), but this stuff is so clumpy! It just makes all of my lashes stick together and I can't get a comb through them. The curl sticks with the waterproof version, but I really hate the clumping. I wouldn't buy this again.

A lot of gurus said that this mascara is a very good dupe for the Too Faced Better than sex mascara. NO, it is not a dupe... It is not even a good mascara. Only the packaging is elegant. The product itself sucks! Too dry, no volume, no length, no nothing.

Lately I’ve been a little bit depressed about my eyelashes looking more sparse, but after using this for the first time in a few months again, I realize it’s because I have been using crappy mascara. This stuff is so intense that it literally makes me look like I have false eyelashes. It is incredibly pigmented, and it is as thickening as it is lengthening. It also holds a tight curl all day. One caveat - there are two reasons why I stopped using this mascara a few months ago. One, I think it was irritating to my eyes, causing my right eye to turn red for a few weeks, making me think I had some sort of infection. I wear contacts, so it’s not to be taken lightly. The other downside of the stuff is, it is incredibly hard to take off, even with make up remover. That said, I am so impressed with the results today, the stark contrast between this mascara and the others I have been using in its place in the last few months, that I think I’m going to start using it again.