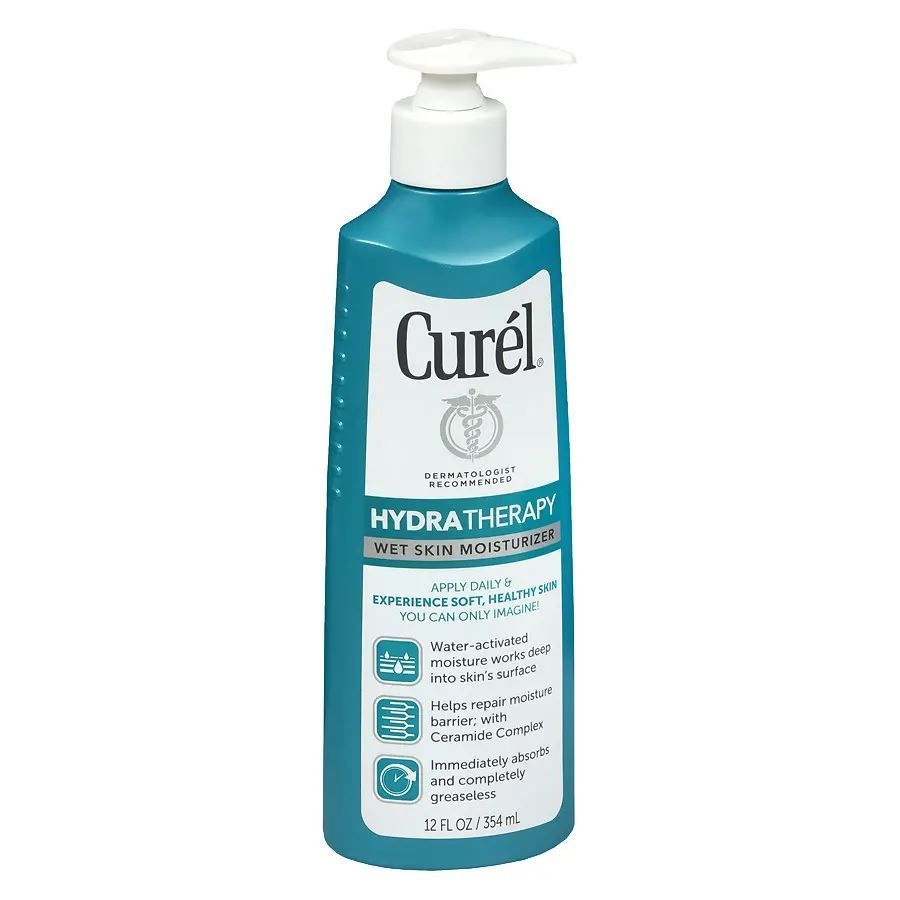 This is a review for the Itch Defense variation of this product. I have eczema patches on my elbows and feet, and my body skin (particularly my legs) can be very dry and itchy. My skin can be very itchy, dry, and tight within minutes of exiting the shower. I have tried baby oil to try to keep my skin hydrated, but it caused irritation, itching, and bumps. I bought this product, not really sure what to expect, particularly because it also has mineral oil. I've used this with every shower for the past week, and my skin feels hydrated as soon as it goes on. That tight, dry feeling doesn't transpire. I pat dry and follow with a body cream and my skin stays hydrated. You might be able to scoot by without body cream if you use this, but I was not willing to try with my history. I have not had irriation or bumps, and my skin is not itchy. I am really surprised and pleased that a wet skin moisturizer is so effective. A little goes a long way, and the pump makes it easy to wok with in the shower. Do not rinse this off or rub your towel on your skin to wipe this off. Put this on wet skin, and then pat dry with your towel. Follow up with your moisturizer.

Six months ago, I would never have imagined that I'd be happily smearing a vaguely citrus-scented body lotion on my sensitive, reactive,seb-derm afflicted 44-year-old face, but I NEVER want to be without this stuff! I've been using this twice daily for the last several months to help combat the effects of hard water and general age-related changes in my once oily and un-finicky skin, that now seems to react to almost everything. The fact that it is scented doesn't thrill me, as I tend to not do well with scented products and I'm aware of the potential sensitizing issues with citrus oils, but I've given it a lot of time, and I don't see any ill effects. Does my hair stick to my face a little? Sure! It's a fair trade-off though, as my poor skin has stopped turning bright red in response to every shower, temperature change, blast of wind, cup of afternoon tea, or just apparently looking too hard at it. I would consider this a bit pricey for a drugstore body moisturizer, but a little goes a long way on damp skin so a bottle lasts forever as a facial product. I'd noticed this on the shelf, but dismissed it as gimmicky and over priced, until reading a review by someone using it to heal their damaged moisture barrier, as it contains ceramides. I've tried a LOT of stuff over the last several years. Pretty much every highly rated cult followed holy grail blah blah blah, only to be forced to return to Albolene cold cream as a moisturizer. That works, but obviously, a slick of pure petroleum is about the least cosmetically elegant solution possible. This stuff might be a bit extreme for more normal skin, but it has been amazing for my chronic issues. I highly recommend giving it a try, and I plan to hoard some.

I just finished my first bottle, and it has done absolutely nothing for my skin. I have pretty much normal skin with a little dryness around knees and elbows. I applied it after showering. Even though it's thin and watery, it took forever to absorb into skin. I paid a little over $10 at Target. Total waste of money and I will not be repurchasing. CeraVe moisturizing cream is much better!

I used this for my scalp! My scalp was not doing so well. It was very irritated and dry and no matter what I used it was not happy. Oil treatments were even aggravating my scalp and doing nothing. Sadly I am pretty sure I have both psoriasis and seborrheic dermatitis. I finally decided I wanted to try some ceramides on my scalp and see if they could help restore my scalp and give me some relief. However, I could not find anything that was suitable for use on the scalp with ceramides. Then I found this which you apply to wet skin. This is how I used it. I used an old scalpicin bottle which is small and has a tip for better application. I put some warm water in the bottle then my desired amount of the hydra therapy (a couple teaspoons until I feel it is beneficial) shake it all up, part my hair and start applying in sections row by row, as a scalp treatment and leave it on from 15min -an hour. I do not need to rub it in or anything because it is liquid it coats the scalp with each section that I apply it to. Then I put my hair in a loose bun and put a shower cap on. It worked immediately to give my scalp some relief! From the very first use, the driest spots were softened and not so dry and irritated. It washed out very easily and I never had any build-up or residue left on my hair after washing out. I did it nightly for the first week then every other night until my scalp was not as angry. It is much more under control now and much less itchy and flaky!! I used it about once a week if needed. My scalp is not healed as both these conditions are very hard to get rid of completely but my scalp is now manageable. It also works well for dry skin and I use it often applied to my hands with a touch of water and to dry spots. I never use it out of the shower because I just do not care to use an all-over lotion in this manner. It does soften the skin and helps heal.

I didn't get too excited about this product when I received a sample in one of my monthly beauty boxes. I always barely pat my skin dry and apply lotions/butters/creams as I'm getting out of the shower. I decided to try this anyway and I was pleasantly surprised! It really did absorb very well, even before I was ready to leave the bathroom. My skin didn't feel greasy or sticky like it had a lot of times when I'd put on whatever other moisturizing product I was using at the time. Right away, it seemed like my skin was much more moisturized and soft than before but I kept using it for a few weeks to make sure. I've since finished two nice sized sample tubes and am now into my first full size bottle. The only cons to me is the the product is a bit expensive, but not bad. It's either fragrance free or so lightly scented that I can't smell it and I generally like a nice scent to my lotions. Neither of these things will keep me from continuing to use it. UPDATE - 12/29/18 - Still using this, still loving it!

I love this product. It saved my really chapped hands this winter. I use it to take off makeup and its gentle. I don't get any greasiness like others have said. Once mixed with warm water it hydrates! Love it! Not easy to find.

EDIT: I Changed my three star review to five stars. and changed the recommendation to would repurchase especially if you have combination skin. This is because it works as a multipurpose product (I am lazy and like that) as primer, as moisturizer, as cuticle cream, and on rough heels. I think it works best applied sparingly with water just splashed on. I don't need a pump; I am fine with a squeeze tube. I wore this in the hot sun and it didn't budge for five hours. If you use literally just a drop, the scent is negligible and this can double as a primer or mixing agent for my Cinema secrets foundation palette #3 (I am NC 30-35, combination skin, prone to milia and hives). I also found if you are more sparing in use and apply to damp skin (or dry skin and just add a splash of water, this is not greasy). IMO this is similar in texture to Elf hydrating primer for the face (if you add a little too much). But, I like EHP since it adds moisture to my drier areas. I should also note, I usually only powder my T zone (I don't typically use foundation on my nose). I have also used it sparingly on the rest of my body. (Both dry and with a splash of water) No grease. Do not buy if you are opposed to mineral oil. I use several other moisturizers, primers, cosmetics with petroleum ingredients with no problem but YMMV. ----- Original 3 star review solely using as moisturizer on body: I got a free travel size. It feels like a slippery silky cross between silicone product and a a dry oil product like neutragena dry sesame oil. There is significantly more slip when wet, but this also works when dry, so it would be pointless to pay a premium. I used it on my heels. It actually acted kind of like Bandaid blister block when I eventually put on rockstud flats ( the most uncomfortable flats in the world). It also somewhat moisturized my cuticles. It has the scent of plastic orange. To perfumistas who enjoy the plastic doll head scent in Tocade or Lady Vengeance or the rubbery Bulgari Black (granted none of which are citrus)this would not even register. At any rate, the scent is not nearly as strong (IMO) as Nuxe citrus lip balm (which I eventually tossed as I found the strong citrus there a lip irritant). I prefer cerave cream which also has ceramides and can be used on damp or dry skin.

I got a travel size bottle of this. It's greasy after you put it on and rub it in. I have dry skin so a product that gets greasy on me if very rare. I wouldn't buy this again, and glad I only got the travel size to begin with.

You apply it to wet skin after showering, and rub it in, then towel dry. Well, let's just say I will never buy this product again! After using it for several days, I am annoyed with a few things: 1. It has no fragrance at all, but after applying, it ends up smelling like grease. 2. It never really soaks into your skin, so you end up just wiping it all off with your towel. 3. I always have to apply additional moisturizer because this is just so thin and watery and does nothing at all. The price is fairly high for what you actually get, which is a bottle of stinky grease that you wipe off on your towel. Yuck. Other Curel products are so much better!!!