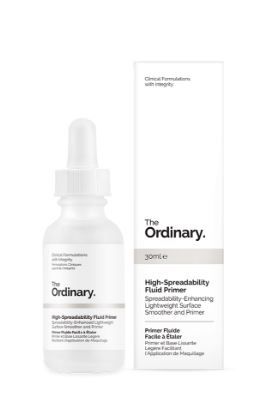 This is a nice smoothing and blurring primer. It nicely preps the skin for foundation. I do find if you use too much foundation will slide around. I use a small amount in my t zone area to blur my pores. It, also, works all over the face to blur fine lines. It's basic but works. Pros: Price. It's affordable. Smooths fine lines. Blurs pores. No fragrance! Cons: I'm not a huge fan of the dropper packaging.

Doesn't last for very long and slides out after some hours. Broke me out from first wear

The Ordinary High Spreadability Fluid Primer is AMAZING!! As the last reviewer already mentioned, you will notice a difference right away! If you have dry combo skin, as well as a textured surface, this primer is a must-have! It just works! <object onclick="ga('send', {hitType: 'event',eventCategory: 'Ajax Interaction',eventAction: 'PlayVideo',eventLabel: ''});" width="360" height="320"><param name="movie" value="https://www.youtube.com/v/5uyY05yV2Hg"><param name="wmode" value="transparent"><embed src="https://www.youtube.com/v/5uyY05yV2Hg" type="application/x-shockwave-flash" wmode="transparent" width="360" height="320"></object>

I Have dry/combo skin and I use this with my Mac studio fix liquid foundation and set it with maybelline fit me powders. And it looks great all day! You can notice a difference right away after blending it in. It’s not too drying, but does matte the skin. I really like it for the price, I have no complaints. And I’ve used SO many primers, this definitely is worth a try!

Bought on a whim. Was a bit unsure about how the texture would be. It's very runny, clear and unscented. Once applied to my face it certainly spread easily. Foundation went on pretty smoothly. Haven't yet tested longevity, but my face makeup looked quite nice when I wore this. I like the product so far and have been pleasantly surprised at how much I like it as I usually go for thicker primers. The only thing I don't like is the packaging.Perhaps there's a reason for using a dropper bottle, maybe it's too runny for a pump?! I often do my makeup on the go and it's awkward to use compared to more standard tubes/bottles/pumps. I wouldn't repurchase because of the packaging, unsuitable for my needs. (I don't mind so much using droppers for skincare bc I do that at home).

I wasn't terribly impressed with this product. Oddly enough, I had no issue with the packaging, and found the product to have a decent consistency that worked with the dropper/pipette packaging. What didn't work for me, is that the product is basically a very heavy, siliconized oil that did nothing to &quot;prime&quot; my makeup, and didn't do anything to help my makeup last or stay put. If anything, this product made my skin even oilier, which is totally counter-intuitive for what a primer should be, however reasonably priced. This was a huge fail for me.

My special occasion primer, a little goes a long way. Your skin looks very different after using this. I wouldn’t wear it plain. Makeup sticks and it lasts all day. Doesn’t smell. Perfect product.

I’ve purchased this primer twice now and my two experiences with the product have been pretty different. The first time I purchased it, I liked the product but it was a thicker gel like consistency that felt velvety on the skin but I questioned why the packaging contained a dropper given that the product was far too thick for the dropper. The second time I purchased it, it was a liquid consistency which I assume is the proper consistency given the dropper packaging. It is far more runny than any other primer I have tried but once it is on, it feels velvety and smooth. I certainly needed to use loose powder over it to mattify my face. Overall, for $8.80 AUD, I can’t complain about either version I recieved - the texture is nice and it allows me to put on foundation more smoothly (for background I don’t have any issues with large pores but it fills in my small pores well). I would recommend giving it a try if you are on a budget.

I really wanted to love this primer as it was such a good price, and I've heard brilliant things about The Ordinary products (or certainly their skin products). Although the primer itself isn't terrible, the packaging is so completely ridiculous that I can't bring myself to buy it again despite the very reasonable cost. So, the primer. It's called High Spreadability and that's a fairly decent description. It goes on super easily, feels pleasant to spread over your face, and works well with my combination skin. Unlike better primers I've tried, I don't immediately notice a difference in terms of my skin neutralizing out a bit when I've applied it, especially as it's a little fluid-heavy, but it's lightweight enough to look fine underneath make-up. There is no smell to it which is fine, as I don't need my primer to smell pretty (though it's always a bonus when it does!) The packaging is where I have a major issue. The pipette simply doesn't work. The primer gets clogged in the stem and once it reaches a certain point of saturation, you have no choice but to simply spread the edge of the stem over your face or transfer the primer to a different bottle. I do the former. I also find that you have to be VERY careful in screwing the lid on tight otherwise it's prone to leaking if you don't store it upright. For this reason I won't take it traveling. This primer has definitely taught me to never buy another primer that doesn't come with a pump bottle!

This little bottle was amongst the first 'The Ordinary' product I tried. Initially I picked it due to the fact that it was only $10 and since my skin is fickle, a tenner wouldn't break the bank if my face rejected it. I've been burned by very expensive primers before, which promise so much but under-deliver in longevity, are from brands that test on animals or are just too expensive to realistically re-purchase on the regs... (I'm looking at you Hourglass &quot;The Veil&quot;, you expensive, steep learning curve you!) As an oily gal, this primer is great. It goes on like a dream, doesn't irritate or clog my skin and doesn't leave a white cast like many silicone based primers I've tried. It's unscented and vegan friendly too, so bonus points for those too. As a primer, it makes my makeup go on so much easier and far less streakily. I use this under matte liquid AND powder foundations and it works just as well for both. After wearing it under makeup for a 12-14hr shift as an RN, I look 'dewy', but my makeup hasn't shifted or worn off unevenly. When I skip it and wear just the foundation on it's own, I'm left looking like I've rubbed a stick of butter all over my face and since my foundation likes to migrate to my five-head and eye-area wrinkles, I'll look like I'm ninety-five years old. As a 28 year old, you can imagine oily, patchy Methuselah isn't the look I'm really after. But I digress, another really great use of this little wonder is if I want to look 'makeup-free.' I can slap a bit of this on, since it has a nice, kinda 'blurring' effect that smooths over some of my large pores, pigmentation and chickenpox scars nicely. I can forgo foundation altogether, just a swipe or two of mascara and I'm good-to-go. I especially love that this stuff delays the inevitable Panda-ing under my eyes with certain mascaras for at least 2 extra hours, which is always good in my book. Now the bottle, while it looks lovely, is functionally pretty effing silly. The eyedropper isn't strong enough to control a substance that I can only describe as being of a vaguely similar consistency as a less-sticky, watered down maple syrup. Instead it just dribbles/gloops out everywhere a lot faster than it looks like it could actually move. I've left the house with primed toes on one foot before due to an accidental misblob (Bonus points because I didn't get blisters on those toes that day!). 9/10 times, I end up with far more primer than I could ever use for one face, because it moves faster than I can, but I can't put it back into the bottle for hygiene reasons, so many an application has been wasted. TL;DR = why 4/5 lippies? -Makes my makeup stay where I put it. -Super affordable. -No more 'long-day-at-work-one-woman-oil-lamp' problems. -Doesn't destroy my skin. -Can use it on it's own to sorta blur out some of those imperfections. -Pretty (but ultimately useless) bottle.