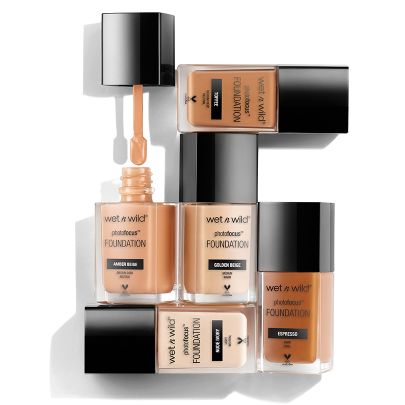 The pros of thIs foundation are that it’s actually inexpensive unlike a lot of drugstore foundations and it has a decent shade range for being so cheap. The shade shell ivory is pretty good if you have neutral to warm undertones and fair to light skin. However I think this makes my skin look awful no matter how I apply it. It seems to look like makeup and not like skin. It gets a very dried out look and it emphasizes texture. I think it also oxidizes to a peachier shade as well. It just doesn’t look smooth at all. It didn’t work on my skin when it was oily and it definitely doesn’t work on my skin now that it’s dry. I’ve tried adding a drop of oil but it doesn’t really smooth it out enough. Also it kind of stinks and I hate the unsanitary packaging with the applicator. I’d definitely recommend L’Oreal fresh wear or CYO lifeproof/ Soap &amp; Glory kick-ass as alternatives to this (if you can find your shade) as they both have way better textures than this.

I wanted a light liquid coverage. This is light and you can build on it. But that is it. It has a bad smell, reminds me of paint. I hate the lid with the spoon. I forget about it every time I open the bottle and it spills out. Once it's on my skin, it feels like its drying up and tightening. then it gets itchy. The colour is shell ivory and it does work for my fair skin. I just dont think I can use it alone. I mixed it with my moisturizer and then was able to use it, but that smell! I wont buy this again and I will most likely give it to someone or trash it.

The foundation gives a nice buildable medium coverage. I find the formula easy to blend. It looks dewy on my skin and I need to powder it to keep oil at bay. The formula smells like paint which I find unpleasant, I also find that it often clogs my pores and I break out a bit after wearing it. It feels heavy on the skin which I don't like as I prefer light weight makeup and I'm a fan of bb creams (the foundation can me mixed with moisturiser for a more sheer look) However, it looks very pretty on the skin and has good coverage so I wear it if I'm willing to get a couple small breakouts.

Overall, I really like this product, and for the price, you can't beat this drugstore foundation!!! Pros: Great coverage- medium to buildable full coverage Lasts all day with no separation/cracking Doesn't settle into my smile lines Love the spatula applicator (you can apply straight to your face and avoid messy hands) Cons: Smells like paint, but dissipates after time Oxidizes a bit to an orangey untertone Wish they had more varying shades

I purchased this foundation hoping it would be just as good as some of the make-up gurus make it seem, but it was just a big let down. The price point for this foundation was honestly good. It was around 7 US dollars and I bought it from Kendra. The shade range was pretty minimal, the shop having just four shades available, but I somehow found a pretty good match. The packaging is not too bad either. It comes in a glass bottle, something that I particularly like (it minimizes, even in the tiniest bit, the mass production of plastic, which causes in turn great pollution problems), and the applicator is a tiny plastic spatula. Honestly, I am not enjoying the applicator very much since it can get pretty messy during application. Now, I tried this foundation in several ways, since I really wanted to give it a fair shot. I used two different kinds of moisturizers under it, a thicker, creamy one and afterwards a gel based one. I tried two different primers, one of them being the Wet n' Wild Photo Focus Matte Primer, and I even tried it without a primer as well. I changed the methods of application, using a blender at first and then applied it with a brush when the blender didn't seem to do the trick. But no matter what, the end product pretty much looked the same. The coverage is medium towards light,and one of the good things about this foundation is that it doesn't oxidize. But from what I've seen, the coverage is not buildable and every time I wanted to layer it, the foundation just started dispersing and breaking up. For me in particular, this foundation ends up just staying on top of the skin, poorly blended, and in some portions of my face it clings to patches of skin, making the end result look pretty bad. But from what I've seen, the best method of application for me would be in very small doses, and just one layer applied with a brush and then blended with a sponge. I also tried it in combination with other foundations, but I can't say I was successful. When used with other products, for example my Catrice concealer, the foundation just dispersed and broke up again, almost disappearing from the region where I applied the concealer. I also tried applying powders on it, some loose setting powder and some bronzer and although the foundation is not working that bad with powders, the end result still looks patchy. All in all, this foundation might be called Photo Focus, but I sure wouldn't like somebody taking my picture when wearing it. While this foundation might work wonderfully for others, it just doesn't do well with my skin. If you have the possibility, I suggest trying the foundation beforehand, just so you can make sure it works with your skin.

Not a big fan of this formula. I bought it because all the beauty guru videos claimed it was SOooo good. My skin is just a little on the oily side, but not oily enough that I have to have a setting powder (although I usually use one, it’s not a have-to). When I apply this, it seems to take forever to “settle” into my skin, if that makes sense. It’s like it glides over it &amp; looks really unnatural. I have to really work with it before it looks like skin. But once it dries, even though I’ve blended &amp; blended, it looks patchy and obvious. The other thing is the shades. I bought “Softly Beige” (I THINK) and it looked like a good match in the bottle and when I was applying but about an hour later, it looked SO orange, and again, even though I blended &amp; blended, it left an obvious line. It’s like it turned into a totally different shade once I had it on. After the first application, I bought a lighter shade so I could mix the two, and that helped with the shading but there was still the patchiness once it dried. Probably won’t use it again.

I love how this looks on the skin, very flawless and soft however....it doesn't wear well or for very long on me. it starts to breakup around my nose after a couple hours, which is odd since i have dry skin. I do recommend checking this out if you are interested in it however because it isn't a bad foundation but i have had better

I was really hoping to like this one since you cannot beat the price of it, but unfortunately just like the NARS Natural Radiant Foundation, it easily rubs off when I rub my nose (which I apparently do often at work without consciously knowing it!) The overall look of the foundation is nice on the skin, medium coverage and looks pretty smooth even after a full day's work, but because it easily rubs off I won't be purchasing this again once I've used up the bottle I currently own. Back to the drawing board for an affordable foundation that doesn't transfer and won't flashback in photos!

I really like this foundation, good medium coverage and the shade I chose is close to my skin tone. If you have oily skin, you will need to set this foundation because it will crease, move, transfer, and separate, BUT if you use a good setting powder that foundation will not move and I find it looks very skin like on me. A few cons I have with this foundation is the smell, although it smells like greasy paint, the smell does not stay long, also I wish it came with a pump, it has this built plastic applicator that doesn't get alot of product if you are finishing up this product. The shade range is also a con, expand the shade range, you have the money for it wet n wild. All in all it's a good foundation for what you are paying, but there are better out there.

An ol' favorite. I love/hate this foundation. It doesn't have a pump but a weird plastic applicator thing, it stinks like paint while you are applying it (the smell doesn't last a lot tho), the coverage is nice, medium/buildable, it blends nicely and can be builded to the full coverage look, also works wonder with almost every concealer I have tried on top. My issue is the lasting. It can look flawless for 4 hours or so, but then it starts to crease into my smile lines and lines I didn't even know I had, even if I set it with my favorite loose powder. It is still pretty awesome if you mix it with another foundation. For the price I think it's ok, but for a little more you can buy better foundations, but when I'm broke I always go back to this lmao