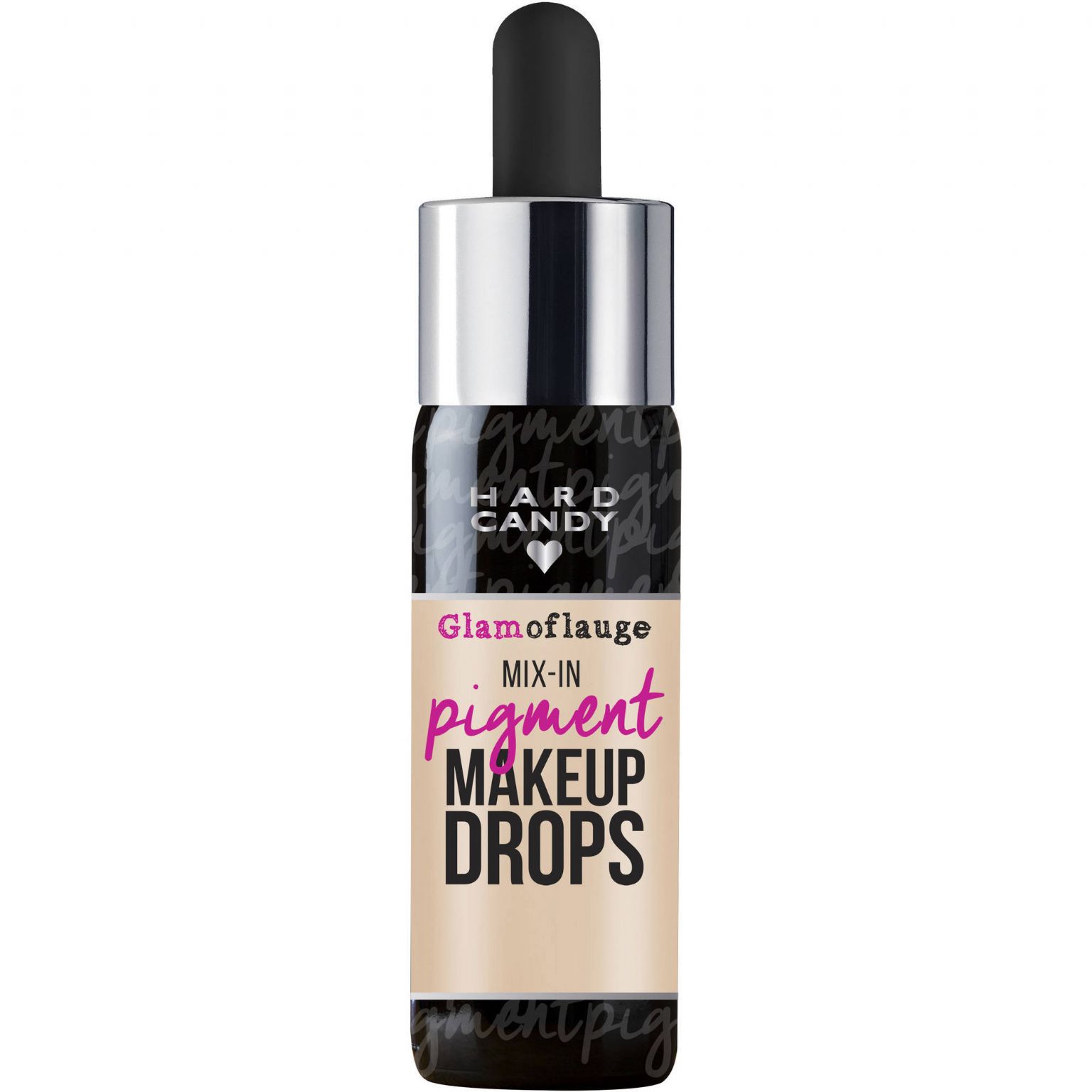 I picked up a bottle of this in &quot;Light 1&quot; quite a while ago, and it sat in my collection until about a month ago. I decided to try them out and I am SO glad that I did. I started off by using these right after applying my moisturizer (while it was still moist on the skin)... nothing mixed with it. I used a dry beauty blender and that worked very well, but the color was slightly too yellow for my skin (which tends more neutral-pink undertones). So then I tried mixing in my MUFE Full Cover concealer (#4) and that really helped take down the yellow a notch. This is my favorite way to wear it but both ways are very long lasting and almost look like there's nothing on my skin. My technique: I simply put my concealer (doing a W-shape about 1/2&quot; tall) onto a clean surface, then add the drops on top and mix with the end of a small makeup brush. Then I dip a dry beauty blender into it and swipe it all over my face. This single layer gives me pretty good coverage but I always dip back in and bounce the sponge over my face for a 2nd layer on the spots I need it (mostly cheeks). Very build-able coverage! I've also tried mixing this with Etude House Face Blur Primer and the results were pretty good. The primer itself is kinda light so that helped lessen the yellow tones of the drops. I haven't tried wearing this all day but I wore it for a few hours out to dinner and it was pretty good. The drops are very pigmented, yet also very runny, so the dropper bottle is quite messy but it's easy to clean up if you make a mess. I shake it really well to mix things up before using it. I think this would not work well BY ITSELF if your skin is too dry to begin with, which is why I like to put it on very soon after moisturizing. Next I will try using it mixed into moisturizer but I really like the effect of the drops with my concealer for everyday wear. Great price; will definitely buy these again.

I bought this product to lighten my It Cosmetics CC cream. Light is a bit too dark for me and Fair is too chalky. To avoid buying 2 full sized tubes of product I picked these up. (Yes, I tried cover fx and regardless of the combo, they separated on my face) These are cheap so I figured I had nothing to lose. The reviewer who said squeeze bottle is spot on because they’re uber messy. But, as I learned from cleaning my vanity, they have pretty impressive staying power. Adding them in actually extended my wear time. They lighten my beloved spf50 cc cream just enough, and add a little more coverage to boot. I have not broken out and it has not caused my type 2 rosacea to flare. I will absolutely repurchase *if* I ever use it all, and am enjoying enough to buy the actual correct shade and mix it with my moisturizer or possibly a sunscreen when summer rolls around. The dry down is very dry and I imagine they work better with an emollient base. Think acrylic paint. These are meant to be used as a Mix In as the name states so it’s unfair to think of them as otherwise. I am very pleased. The dropper stinks, but for the performance and price who cares?

I tried to use this as a mix-in with my moisturizer and it was a disaster. No matter how little I use, it ends up as a chalky, caked, uneven mess that I have to immediately wash off. The dropper bottle is also horrendous. The product is actually pretty thick, so the dropper pulls a huge glob of product out that goes all over the place. If you try to wipe off the dropper and reinsert it into the tube, it still pulls out a ton of product. It's just too messy. I love dropper bottle-style products, but this isn't the right consistency for it. It needs to be in a squeeze tube. Regardless of the packaging, I wouldn't repurchase anyway. I just can't figure out the right ratio of pigment to moisturizer. I don't want to play scientist in the morning. I just want to apply and go!

I have absolutely fallen in love with this! It has become my favorite of all the foundations I have ever used (and I've tried a lot!). My favorite way to wear this is to mix 2-3 drops into my Skinfood BB cream. It gives me very full coverage but I honestly don't look like I'm wearing foundation. My skin looks flawless yet natural and lasts all day. As far as color goes, I like Medium 1 which is very yellow toned. I looked at Light 4 but it was more neutral to pin to me although the same depth. I actually thought Medium 1 was a hair lighter. I'm about a NC20-25. It is kind of messy to use, I shake real well and let it drip a couple of drops onto my bb cream and mix together in my palm. Then I apply all over with my fingers or a beauty blender. I think I'm done with foundation, I'll use this with my bb cream when I'm looking for more coverage.

I have sensitive skin so it's nice to customize my own &quot;foundation&quot; on days when I need more coverage

ATTENTION LADIES: These are MIX-IN drops that are to be added to your favorite moisturizer or primer in order to create a custom foundation. After reading all the reviews here, it seems to me that there has been some confusion by the other reviewers as to how to properly use them. They are not meant to be used alone, which is why they are so thin and liquidity. The are simply super concentrated pigments that need to be dispersed by adding them to your moisturizer or primer. You could even add them to facial sunscreen in the summer. Some reviewers commented on how dry and cakey they felt on their face and that is, again, because they are meant to be a tint only - not a stand-alone foundation. The directions are on the bottle (although printed very very small), and on the Hard Candy website. As for the coverage, that is customizable, too. More drops = More coverage. Less drops = Less coverage. That being said, I think that if the other reviewers would give them another go they might actually like them and the versatility they offer. I have mixed mine with both moisturizer, as well as primer, and since I have oily skin, I found that the drops+primer worked best for me and gave the longest wear. But, if your skin is on the drier side the drops+moisturizer would be the way to go. Now, as for HOW to mix them, I get a small piece of aluminum foil and put some primer (or moisturizer) on the foil first, then I begin by only adding 2-3 drops of pigment at first. I take a Q-tip and break one of the cotton ends off and use it as a mixing stick. Test it along the way and just keep adding 1 drop of pigment at a time until you achieve the level of coverage you prefer. VOILA!!!!! ????

These are ok. At first I liked them but then I realised that imo they don't really add very much coverage to a foundation at all, maybe a smidgen more but really not much to the point that I'd go out of my way search for these again. Nor do they lighten foundation either, especially if you're a very pale person like me If you're looking for a colour match for very fair skin, Fair 1 in these drops is a dead on dupe shade for Covergirl's Clean Sensitive foundation in the shade Ivory. I used these drops today to mix into this foundation and when I added 2 drops to the CG foundation, I couldn't tell where the drops went and I didn't find that it added very much extra coverage at all but I wasn't looking for extra coverage, I was looking to lighten the foundation so if you're very, very pale like me then Fair 1 in these drops won't really be pale enough for you (I have swatches of the 2 lightest shades in my profile). These drops don't break me out, don't make me oily, and they don't sink into my pores. I think these 3 things are the only pros imo. The drops are very liquidy without any oily texture but the dropper is pure crap so make sure you squeeze out most of the drops out of the dropper after you shake the bottle very well lest you want to waste drops or have drops going everywhere. Overall, a firm pass for me on these. Pretty useless and not pale enough.

I do not care for these drops. I'm surprised to see the other reviewers state cover fx drops are thicker. To me HC drops are way thicker and very runny. Yes, these are VERY pigmented and do help make darker foundations a better color match. I got shade fair 1 to use up my summer foundations while winter settles in. I maybe could have gotten a lighter shade (I'm nw13), but I will not repurchase these to try other shades. Also for reference I have normal to dry skin. These look so nasty and cakey on my face. It turns and good foundation into a mediocre one. Sinks into pores and looks mask like. Once you apply powder to set it gets worse, exaggerating any texture on the face. I've applied this alone too for science and ick! So cakey and bad. I've mixed these with koh gen do aqua, UD naked skin, &amp; loreal lumi. It looked terrible with all those and every method of application. Beauty blender, stipple brush, fingers, face brushes. Yes this may be &quot;ok&quot; for the price but I would definitely stick with cover fx drops. No I won't repurchase or recommend