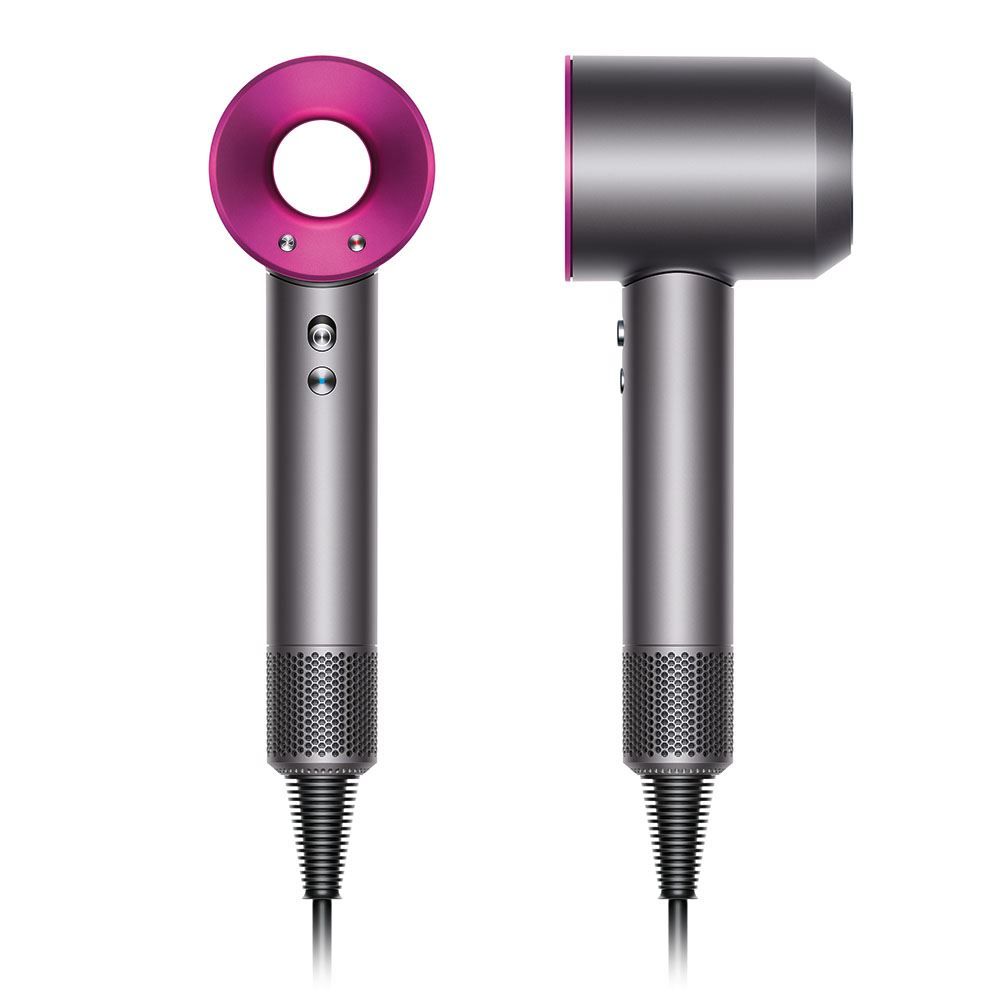 I coveted this dryer from the time it was released and was sooooo disappointed by its performance, which would have been unacceptable even for a $50 dryer. I was totally seduced the light weight and small size for travel, the magnetic accessory attachment, the beautiful design, and the fact that my hair would never be accidentally sucked into the fan when diffusing. But none of those things matter if the dryer turns your hair to straw. My hair is fine and curly but generally quite shiny and soft (2c/3a, low porosity). After using this dryer, however, it felt dry, frizzy, crispy like straw and lost its shininess. It was like the cuticle wasn’t lying flat anymore. That really worried me because it seemed like a sign of damage. The performance was just so poor. My curls didn’t form nicely or become at all defined; they were just as frizzy as if I’d pointed a normal dryer without a diffuser at my head, no matter which combo of heat and air and products I tried. Also the design of the diffuser itself is very poor. It’s so small and so shallow that it couldn’t cup even my fine curls - my ponytail circumference is smaller than a nickel, so that’s saying something. On top of everything else, the Dyson didn’t dry my hair any more quickly than a normal dryer. I really wanted this to work for me, so I tried different heat and fan combos for about 3 weeks and then finally decided it was just damaging my hair with absolutely no benefit. So back to the store it went and they were not pleased to see me. My old Parlux dryer is so much better for less than a third of the price. Save your hair and your wallet - absolutely do not buy this!!

So I am wondering why the bad reviews are concentrated here and why only certain hair types seem to be suffering. My hair dresser who was new (to me) fried my hair with it...used a nozzle so it really was concentrated. When I tried to explain how this device was so bd for my hair (and explained I was not blaming her) she turned it around...lied and then Proceeded to get rid of 'me as as soon as possible. Not even a call from the owner. They are Instagram colorists so they are probably being protective...and they are young so They feel...right. I consulted a lawyer and since I work in a law office, they know me and that's a blessing because they understood I wasn't lyjng. They said I may or may not win in court but because I was treated so badly, they felt it was worth it to consider legal action because it would cost me nothing and they would at the very least have to hire an attorney and defend themselves, missing work and spending money. That may at least make this establishment treat someone else better in the future if a mistake occurs. To be clear all businesses make mistakes it's how they are handled that matters. This was and continues to be an ordeal and I would recommend staying far from this dryer if you are a professional because let's face it..if there is a 2 percent chance of this happening..why take it! And if it does happen..please treat your clients well through it.

Beware do not buy! Massive hair loss. I use to have thick long hair. I started using the dyson hair dryer in April 2019 my hair started falling out end of May about 6 weeks after using the hair dryer. My hair is thin now and breaks very easy now I’m devastated. This product needs to be recalled.

I did my research and the Dyson reviews were ok so I purchased this hairdryer. The reviews now that I am reading months later, mirror my horrific experience too. My long, thick and shiny hair has thinned to half of what it was. It is broken, dry and brittle. I could cry. I purchased my Dyson Dryer in April 2019 and within 6 weeks it started falling out and breaking off. My hairdresser purchased it first and recommended it to me. It seemed to dry my hair so fast it was wonderful but I noticed it was dry and dull the first time I used it myself but thought I had probably overdryed it somehow. I then noticed an enormous amount of hair in the comb and plug hole after washing it but I thought it was menopause or diet or stress that caused it. I looked up reviews tonight as I am in constant bewilderment as to what has happened to my hair. It just snaps off, it is broken underneath and there are clumps missing. Today was the last time I shall use this dryer I am returning it. Ellie89 and Jds1178 I have experienced everything you describe. I am so annoyed that I didn't listen to my husband when he said it was the dryer 3 months ago - I could not believe a hair dryer could possibly do this to my hair when it was meant to be better for my hair. I believed it had to be something else, some other reason as I described before. But it is this dryer and I cannot recommend it to anyone. I recommend you DO NOT BUY IT. Don't even risk it. My hair has been ruined and I will have to live with this until it grows back.

DO NOT BUY! The worst blow dryer on the market. Extremely damaged my hair causing breakage and hair loss. I tried different variations of heat/ speed and went back to my GHD blow dryer. Used it for 6 weeks and my hair is improving but so much shorter. I’ve never had such breakage - even cutting off 2.5 inches made no difference in its health.

First of all, I have the thickest hair, Every stylist I've been to says so. Although there is a lot of it, the hairs are fine, straight, no body, no wave. Takes forever to dry - until the Dyson. That's why I like it. Has not dried out my hair, but I do use sulfate-free shampoos and conditioners. Plus I don't really use the Dyson for styling, only to dry - five minutes vs 45 minutes.

I am absolutely horrified reading the feedback that 100 percent mirrors my experience. I once had long thick beautiful hair that I had people constantly commenting on..... after using this dryer for several weeks you would not believe what happened. It turned to absolute straw and fell out like crazy!! I too had to cut 6 inches off to start over because it was so bad. I saw three drs trying to figure out what was going on..... and then I too realized what had changed. The dryer..... it was horrible. I switched back to my dryer and it has been 3 years of regrowing and using Milbon conditioning treatments to bring it back. It has almost fully restored. The person who cuts my hair had purchased the dryer and I told her what happened.... I even asked her to use a different dryer when drying my hair. The last couple of times I thought I wouldn’t bother having her use the different dryer feeling like I was crazy..... big mistake.... she’s used in on my only the last several times I have seen her and I have noticed a difference. Never ever ever again! Do NOT use this product! For those of you who have experienced this hair loss please contact me..... I believe we need to challenge this company. They should not be selling this product. Especially marketing it for healthy hair etc after knowing what is happening to people!!!!!

I have very fine frizzy hair and this did not work for me. I do not like to style my hair; i just blow dry it and i was ending up full of tangles/knots every single time. I then decided to use one of the attachments and use it on a low setting. Better results but at that point it was taking me longer to dry my hair than when i was doing it with my old seven years old hair dryer. I think this is a good product but only if you have thick (curly) hair.

Beware! This product caused massive hair loss in both myself and my daughter after a short period of time. It first caused severe dryness and damage to your fine thin hair. Soon after, our hair began to shed like never before to the point of noticeable baldness. It is alarming. This product should be recalled. Their customer service agents were not surprised at all by my complaints. They get many calls regarding this but yet they continue to market this product to the masses.

I received this as a gift from my husband and pardon the pun was ‘blown away’. I was completely sold on this even before using it; the design, the hype, the price tag. And if you’d asked me what I thought of it straight after using it that first time, I would have said five star amazing. Why? The design, the hype, the price tag. Fast forward several months. My hair is in the worst condition of it’s life. My hairdresser and I have been at a loss as to why my once shiny, thick hair is now akin to a birds nest. Dull, dry, breaks easily and appears thinner. I tried supplements, turned down the heating, checked the hardness of my water, used every hair mask treatment available but it was no use. I even considered switching hairdressers thinking maybe she was cutting it badly. (Sorry!) I couldn’t understand what had changed. Then I happened to stay in a hotel and used their basic drawer dryer. I wasn’t sure but my hair felt a tiny bit better. It was then I had a lightbulb moment. I realised the poor condition of my hair started not long after getting the Dyson. When I came home I ditched the Dyson and borrowed my daughters £12.99 Disney princess dryer. My hair felt better. It’s taking time but my hair is beginning to improve. I can only speak for myself and take a guess but while I think the Dyson doesn’t damage hair with heat, I feel it dries it almost too efficiently like a dehumidifier taking too much moisture from the hair causing such a detrimental effect to my locks. Obviously it’s just one experience and maybe my hair type (coarse and wavy) just doesn’t suit this particular machine. It’s a shame but I’m putting down my Dyson for good and I’m pretty sure my hair will thank me for it.