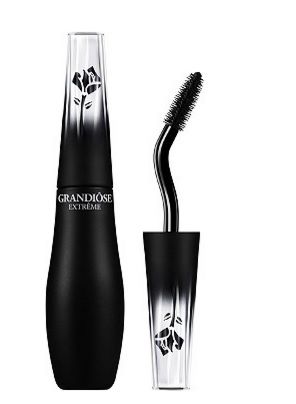 This mascara is outstanding - it lengthens, volumizes and separates beautifully. I really like the shape of the wand as the bend lets you angle in all directions for either eye. I have long curled lashes naturally, and so they hit my browbone - this does not smudge in that spot like many mascaras do. I have yet to use any lancome mascara that I don't like and this is very top of them all.

My fave mascara, nothing else compares to it. I look as if I have fake lashes on. The product also stays fresh for Atleast a month which is awesome because some mascaras start to clump up after a week. If I don’t use it every day, it lasts for about two months. Totally worth it!

Did nothing for my Asian lashes. It's a thick, wet and creamy formula. Very very inky black. Couldn't hold a curl at all because of the wet thick formula. As soon as you try to apply a second coat it clumps very bad and turns your lashes into literally spider lashes. I put off buying the grandiose extreme version for a long time because it wasn't a waterproof formula and I knew straight away it wouldn't work in me. But I saw it in a recent Lisa Eldridge video and i was convinced by it. But nope this mascara only works for long fluffy Caucasian lashes. Lisa has long, Caucasian lashes so that's why it works for her but not for my skimpy asian lashes. I wasted $58 Aud and never going to get my money back. Seriously if you got Asian lashes stick with Grandiose waterproof mascara (which is my HG) or any other waterproof lancome mascara. That or loreal lash paradise waterproof mascara is pretty good too. Forget about waiting for a few weeks for it to dry, I ain't got no time for that. I regret buying this mascara as I can't even exchange it (strict policy here) but I can now share my honest opinion on this mascara for you guys who are interested in this mascara. It's not a bad mascara at all, just not on certain lash types.

My favourite mascara of all times. I have blonde medium length eyelashes and it has been a struggle for me to find a mascara that would actually make my lashes look so full and long. It is very black and does indeed look beautiful on (it is definitely not a natural eyelash look, rather more of a dramatic effect). This mascara has never transferred on me and it definitely lasts all day. Another amazing thing about this mascara is that it actually manages to look even better with time and it has never dried down in the packaging for me (as it used to happen with every single mascara i had ever owned before). I do not think i will ever buy another brand of mascara, unless of course they discontinue this beauty. On to removing it at the end of the day, I am very picky when it comes to how easily a mascara comes off, and this one has definitely been a struggle for me at first. It takes forever to remove with the makeup remover techniques i have used before (makeup wipes, micellar water, makeup remover gels and creams). I have very sensitive, easily irritable eyes, so me having to wipe wipe wipe forever to take it off used to be my only draw back for this product, until one day when i discovered that plain water takes it off in seconds so seamlessly, so beautifully. i now remove my face makeup and eyeshadow with makeup removers, after which i proceed to washing my face with warm water. I very gently massage around my eyes with my fingers and i splash water until it all comes off. After this i take my usual face cleanser and proceed washing my entire face. This truly saved my sensitive eyes and made me grateful that its formula allows me to remove it this way. And guess what.. no more gross mascara residue in the morning either, which definitely used to happen to me before. Now the wand takes some getting used to, but once you figure it out, it truly is great for application and eyelash shaping. My only teeny tiny problem is that if i m in a rush and not paying close enough attention, i find it really easy to mess up and transfer it unto the eyelid while applying it. The price is definitely quite high, but it is definitely worth it for me. It also lasts me forever (although you are supposed to change your mascara every 3 months, i have never had any problems with it before). All in all i would definitely recommend this product.

Damn, that was pretty expensive for the subpar job it's doing. I don't /hate/ it, but I've had drugstore mascaras do the same job for half the price. The tube is fucking beautiful, but that's about it. It's pretty thick, and works well the first three months - then it dries and clumps and is generally messy. The shape that's supposed to help the application is a drawback for me as well, because I'm an amateur and the curvy usually leaves a bit of mascara on my cheek. I just don't think this one's worth it.

Before I came across this mascara, I was convinced that there wasn't much of a difference, if at all, among all mascaras, whether they are high-end or drugstore... Until I found this one, which has quickly become a HG. I was first drawn to the mascara because of the wand - imo, the shape and thickness of the wand are the most important factors when choosing a mascara. I like that it is a synthetic wand (as opposed to a fiber wand) that was fairly thick, which would allow for a ton of volume. The thick wand allows you to lengthen and add tons of volume to your lashes with just one coat. The formula is super black and also on the &quot;wet&quot; side, but I've never had any issues with it smudging or flaking. The formula is a little thick, which allows for super volumized lashes (as opposed to a thinner formula that would give you spidery lashes). I think it does a great job separating, lengthening, and volumizing my lashes. I test mascaras based on how well they can hold the curl in my eyelashes throughout the day. Having straight Asian lashes, it's been extremely difficult finding a mascara that keeps my eyelashes curled all day. Even after a long day of work, my lashes still look like I just applied my mascara. This is a pricey mascara - it retails for $28 in the US - but I totally think it's worth every penny. You can tell just from the packaging that it's more extravagant your typical tube of mascara. But more importantly, when you use the mascara, you can tell the difference in quality of this mascara. I've already repurchased, and may or may not have three spares just in case this product ever gets discontinued... For people who don't want to splurge on a mascara, a really great drugstore dupe for this mascara is the Jordana Best Lash Extreme, which is only a few dollars at the drugstore! This Lancome mascara and the Jordana Best Lash Extreme are both my HG mascaras.

This is an okay mascara I wouldn't say the in the market but it's good. I don't really care for the design of the wand either I don't think it does anything for the application it goes in like any other normal mascara.

A bit tricky to use at first but the package insert helps. I got big, bold, uplifted lashes with lots of volume. A few hours later though and it had melted off my lower lashes all over my undereye. Will be returning after 1 use and going back to my cheap and reliable Clump Crusher which doesn't smudge on me.

Love this mascara! I want the faux lash look. I need volume, lift, and length. This stuff does just that. It doesn't smear, flake, or transfer. I can reach corners of the eye easily. Actually looks like I applied lash inserts. Very happy! My new go-to.

First of all... you need to learn how to apply. The first times I was struggling and had bad results. Once you get to know this mascara(brush), it is okay-ish. Gives length and 'flared out' lashes. But no volume and no lifting. Mediocre - too pricey.