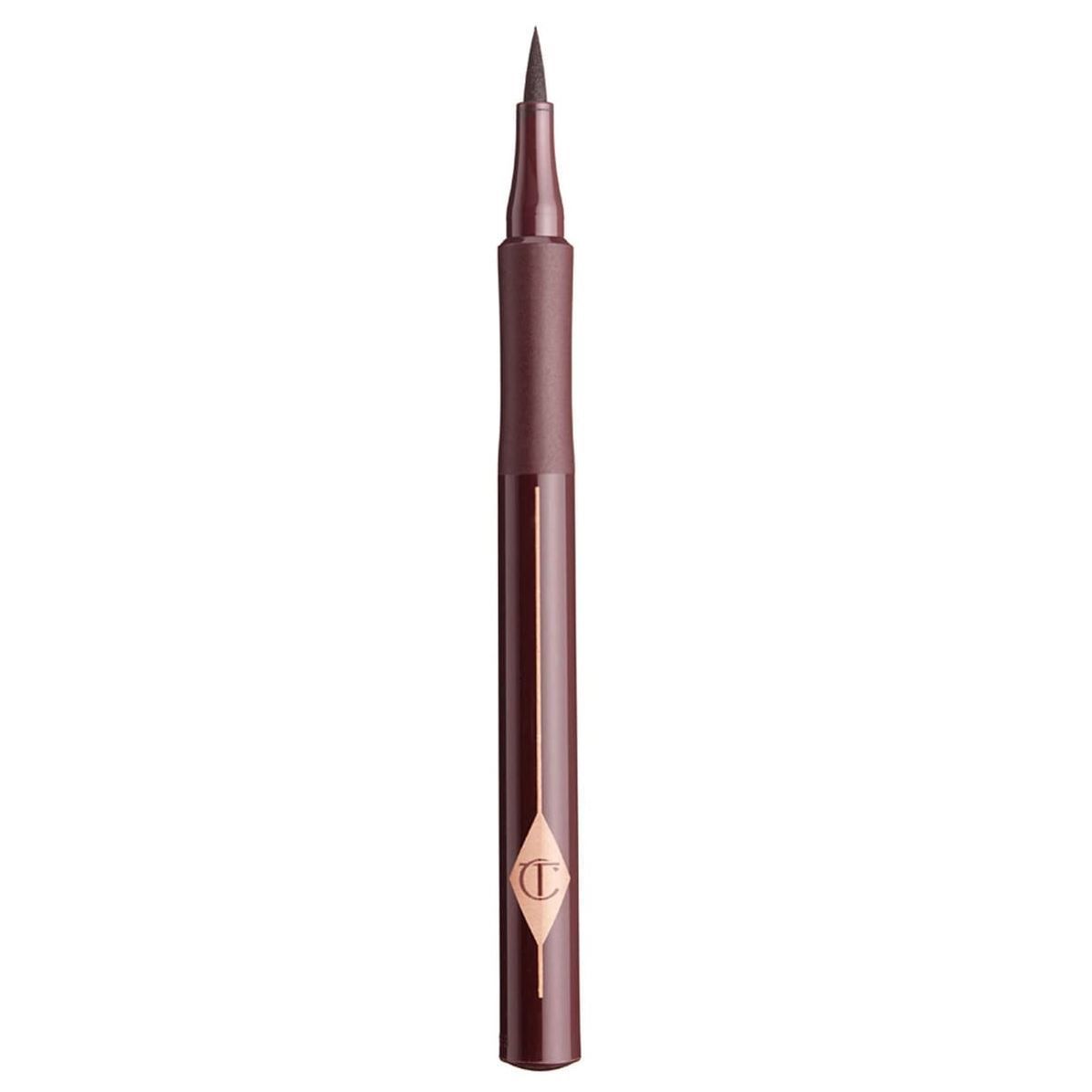 This is a big ol' regret. I love Charlotte Tilbury but this is a very dry liner. It skips a little while I try to make a line, forcing me to make it a bit bigger than I want to even it out. It also skips when trying to fill in an area. The ink flow just isn't great. I don't have these problem with other pen liners like this (Stila Stay All Day Waterproof is my go-to.) The positives are the pen is sleek, it has a nice grip and I really like how fine the tip is without getting linty. (Am I the only one who has this problem with pen liquid liners?) I don't hate this enough to toss it, and it was too pricey for that, but I think I will be using another liner and then just using this up to sharpen my cat eye tail. Also which this were waterproof!

While I think it is a touch expensive, it is certainly a much better alternative to KVD or any other high-end liner of its kind. Feline Flick is a felt-tip liner with a pitch black matte finish. It is gorgeous. The tip allows so much precision, you can easily create all sorts of lines with it. Especially if you are into your pen-liners, this one is a great option. It stays put for hours and hours and hours. Did not smudge on my semi-hooded lids (wow, that's actually a rare thing) and was easy to remove with micellar water. What not to love?? For those of you who are curious to know more about her bestsellers, I have unedited swatches, application tips and makeup look in a separate review here (https://www.partyparrotblog.com/single-post/2018/09/16/Full-Face-Of-Charlotte-Tilbury-Bestsellers). I hope it helps!

Very highly recommended. I have used every brand, every type of eyeliner. Ι have had an excellent experience with this- to be honest the negative reviews were a big surprise. It's a jet black colour on the first coat, it's not too liquid but doesn't dry out too quickly either. It applies like a dream thanks to the precise felt tip. Both cat flick eyes are done in 30 seconds (crazy!). It doesn't snag on the skin (yes, after 35 that's actually a thing). It stays put thoughout the day, but somehow washes off easily, no residue. A complete hero product. I don't mind the higher price for this product's performance.

Smudges, not waterproof, not intense black at all. Left a horrible upside down liner mark on my upper lid! Easy to use but no point when the pay off is awful. Really wanted to love this product but I'll be taking this back.

For me, this was a game changer. The first pen I've used that stays solid in colour, rather than going patchy within a few uses, gives a precise line, goes close to the lashes, and stays all day. I use nars eye primer under it. I love this product. I've returned a couple of months later to add that the pen has not dried up, despite near daily use over a primer, making it another first with a liner pen for me.

SkinVery Oily, Fair, Not Sure

So I recently got this eyeliner &amp; I put it to the test of a 2 horse lessons &amp; I sweated but it stayed just as good as my Kvd trooper tattoo liner. The liner gives an awesome &quot;flick&quot; the easiest liner to use. I'm going to put it to the nap test next. I was all so set to send it back after hearing it wasn't WP but I got excited when I saw it was water resistant (better than nothing!) &amp; can last 14 hrs. I'm highly doubting it will last 14 hours on myself coz I have high rheumy eyes but I'd be happy for a liner that will stick 5-6 hours w/o pandas &amp; doesn't irritate my sensitive hay feverish eyes making them all bleary. Bleary eyes suck, &amp; are very uncomfortable + thus water MORE making a problem up top a problem already. So far so good will be sure to update if somem changes, this is $30 + I did buy a nice dual ended brush/Inglot Duraline to use w it another $25???? Getting to be my most expensive eyeliner. Until I can get that (only ordered yesterday) will try ELF Lock &amp; Seal too but I wonder if L&amp;S would smear the beautiful precise line. Edit 3/11/16: I decided to return this. Last nite, my eyes were doing their usual hay fever dog horse cat allergy &amp; watering &amp; I could not keep this on for the life of me it kept coming off giving me the really bad pandas .....I wanted this to work so bad. W a heavy heart I am returning this. :-(

Sometimes I use gel eyeliners in glass pots because they hold up better than most liquid liners do, but liquid pens are so much more portable. There's no brush-washing afterward, either. So I've been on the hunt for the perfect eyeliner pen, and hoped that I'd found it in The Feline Flick. I thought it was cute that the black color was called Panther, and I had been stalking this eyeliner for months before finally pouncing on it. I have come to the conclusion that if a liquid liner isn't really waterproof, I won't be happy with it. This eyeliner is &quot;water-resistant,&quot; but doesn't last on my watery eyes. I wear contact lenses. Sometimes I have hayfever and my eyes will occasionally tear up from seasonal allergies. So I hated Kat Von D's Tattoo Liner, which claimed to be waterproof but wasn't. It bled and smeared on me every single time I used it. At least The Feline Flick doesn't lie to me and tell me it's waterproof. But CharlotteTilbury.com claims that The Feline Flick &quot;stays put for 14 hours.&quot; It doesn't if I tear up or use eye drops. It runs. Maybe it will stay that long if you don't produce excessive tears. I had much better luck with Charlotte Tilbury's Rock N Kohl soft pencils. They seem to be more water-resistant than this liquid liner pen. Barbarella Brown had great staying power for me, and I wore my contacts with that one, too. To be fair, here are some of the other liquid eyeliners I've rejected because they're not waterproof and don't hold up on my eyelids: Smashbox Limitless Liquid Liner Pen, Kat Von D Tattoo Liner, Surratt Auto-Graphique Eyeliner, Marc Jacobs Magic Marc'er (although it was better than some of the others), Physician's Formula Eye Booster 2-in-1 Lash Boosting Eyeliner (which doesn't thicken eyelashes, nor does it last all day), NARS Eyeliner Stylo. I do use eye shadow primer, which can help, but the ones I mentioned failed me even with primer. So far the only two liquid liners that deserve to call themselves waterproof are MAC Liquidlast and Milani Infinite Liquid Liner. Both come in a tube with a wand with a brush on the end. If you must have a pen, the most water-resistant one I've found is Stila's Stay All Day Waterproof Liquid Eyeliner Pen, and it's still not perfect. My runner-up to that is Clinique's Pretty Easy Pen, which doesn't claim to be waterproof but it's more water-resistant than most other brands. The ink takes a long time to dry, but it stays well after it does. There are a few things I like about The Feline Flick: PROS: 1. The felt tip of The Feline Flick has a nice point that allows you to get right up against the lashline. 2. It's easy to apply. I was able to duplicate her signature &quot;flick,&quot; but it's also possible to draw a less dramatic line with this if you don't want the cat eye. The rubber grip keeps it from slipping in your hand. 3. The ink is boldly dark (not thin or wimpy). 4. The ink stays black rather than turning blue (my Lorac Front of the Line Pro liquid pen did this; the color would fade midday). 5. This company doesn't test on animals. 6. Removes easily. 7. Does not claim to be waterproof. (If it did, I'd lower my rating for lying.) 8. Cute name. CONS: 1. If it gets wet, the line I've drawn bleeds and runs. I tried Trish McEvoy's Finish Line over it, but that didn't solve the problem either, and I'd really prefer that companies make pens with more tenacious ink so that I don't have to buy another product from another brand to make them last all day. 2. I have Nars Smudge Proof Eye Base and Urban Decay Primer Potion. I've used both with this liner. Primer doesn't make the pen last 14 hours either. And even if it did, you shouldn't have to buy a product from another brand to make this ink work. 3. $30 is too much for me to spend considering that it doesn't hold up along the inner corners of my eyelids. 4. The cap doesn't snap down with a satisfying click when it closes. I was used to hearing that click with the cap on Clinique's Pretty Easy Pen. Stila's also clicks, and I keep wondering if this is securely closed. Won't buy again, unless they change the formula of the ink to make it waterproof. I feel the need to be tough on this because the price is $30, and it's not worth it. Stila's liner has better ink and it's $22. In spite of the fact that the brand has very high prices, I love many of Charlotte Tilbury's products including The Retoucher, Full Fat Lashes Mascara, all my K.I.S.S.I.N.G lipsticks and Matte Revolution lipsticks, my Pillow Talk lip liner, The Rock Chick and The Sophisticate eye palettes, and Barbarella Brown Rock n Kohl pencil. Those I treasure. If the product is good, I'm willing to buy it, even if it's more expensive. But sadly, I don't love The Feline Flick. Ingredients: Water (Aqua), Butylene Glycol, Black 2 (CI 77266), Styrene/Acrylates/Ammonium Methacrylate Copolymer, PEG-60 Hydrogenated Castor Oil, Coco-Glucoside, Citric Acid, Sodium Laureth-12 Sulfate, Ammonium Hydroxide, Phenoxyethanol, Potassium Sorbate, Sodium Benzoate, Iodopropynyl Butylcarbamate