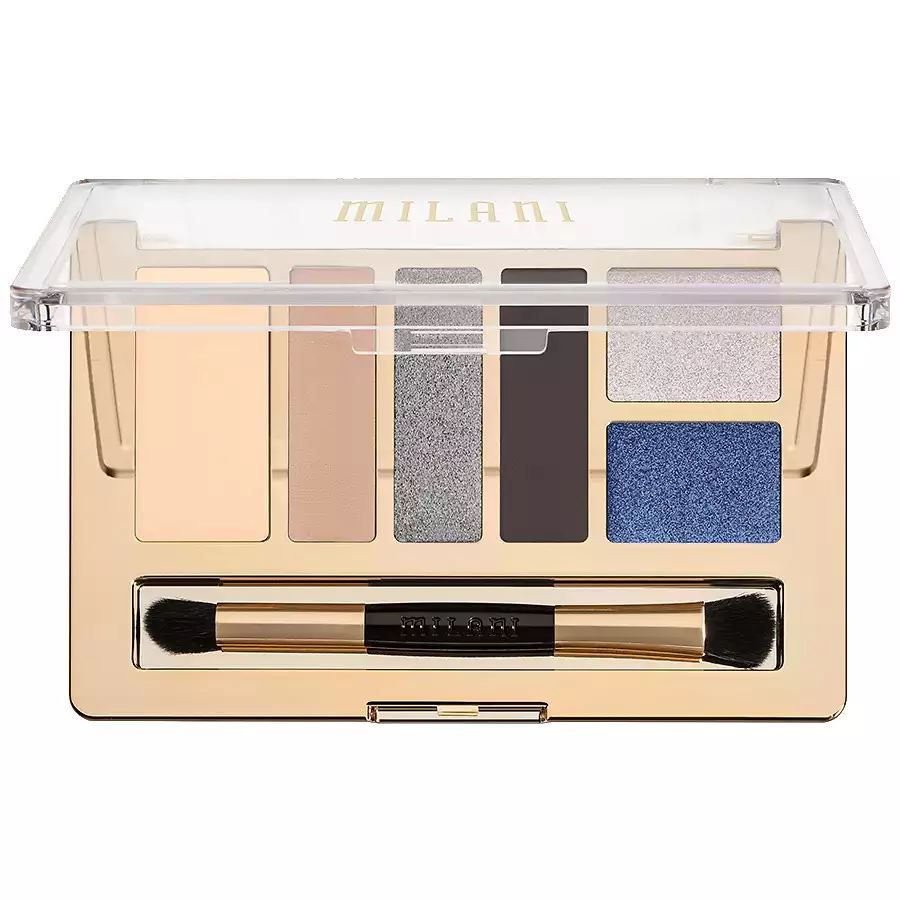 Bought two of these in 01 Must Have Naturals and 02 Bare Necessities. I love both of them and reach for them frequently. I use an eyeshadow primer and it definitely improves pigmentation and longevity but they're good even without a primer. To me these are absolutely great palettes from the drugstore to create low-maintenance &quot;everyday&quot; eye looks and for $10 I'm definitely not complaining. I love my high end glamour palettes like the ABH Modern Renaissance but truth be told the Milani palettes are the kinds of shades I gravitate towards on a daily basis.

I tried four of these palettes during a buy one get one half off sale. And I will be returning them all. I was very disappointed. They look cakey and are hard to blend out. They crease and there's a lot of fallout/kickback. The ones I tried were 02 Bare Necessities, 03 Smoky Essentials, 04 Plum Basics, and 05 Earthy Elements. They all looked so pretty in the pans. Not so much once applied. The colors looked horrible and some of the colors were so close to being the same although they looked like different shades in the pan. Out of the four I tried, I was surprised to find that my &quot;favorite&quot; was the Smoky Essentials since I never really like the classic blue/grey/black/silver look on me but wanted to give this one a try. But even thought it was the best out of the bunch, I didn't like it enough to keep that one either. They are all getting returned. Boo.

If I buy a eyeshadow palette with six colors, I'de like to be able to create a total look, Everyday eyes doesn't offer that by omitting a matte highlight and a dark matte crease/liner in each one. A plus is that Milani has a color scheme in each set and there are some nice single shadows, but the quality is more miss than hit. Another negative is longevity. I first tried them without primer and they faded after a few hours. A primer is necessary. The three I purchased: Earthy Elements - two decent mattes a warm beige and hard to find in the ds, burnt orange, two very nice warm frost brown shades but,( used together become one), two highlighter frost shades that aren't good. Bare Necessities - A matte med/dark brown, light brown satin matte, decent gold and warm medium brown frosts, and again two frost highlight shades that were chunky glitter or lacked pigment. Must have Naturals - Three nice mattes, brown, black, beige, a decent frosty taupe and again two frosty highlighters, one is a dud in light peach but, the other is a creamy champagne that can be used as a highlight on the face as well as the eyes.

I got this yesterday on a buy one, get one half off. Will be returning. I got the Vital Brights for me and the Plum one for my sister (cause I couldn't find anything else close to that price point to get the sale, sigh). The vanilla color was just alright, but I must have 10+ dupes of it. The yellow is pretty, though much more shimmery and less yellow. The blue is nice, but the purple is AWFUL, patchy and dry. The coral-pinky color is pretty, but again I have multiple dupes. The #1 color I got this for, the green, is fine, but not enough to keep a $10 palette for. Since I decided to take these back, I didn't swatch the plum one. For the most part, these are not nearly as nice as the Bella singles, of which I have several and wish I'd discovered sooner (before they became so hard to find in stores). I particularly love and use Bella Ivory, it's just such a nice highlight color; it says satin but it's a bit more shimmery than many that use that term, but not truly shimmer or frost; and while it's not a stark white, the undertone is very neutral, neither pink nor yellow. I can see someone fair-skinned using it as a highlighter as well as eyeshadow.

I bought two of these, Earty elements and Vital brights, after hearing a lot of good things about them. It's cheap and the packaging is nice(props to Milani for giving us a proper brush with this instead of the typical sponge brush!) but I haaate the actual product! The matte shades feel very soft and creamy but when applying with a brush I get so much fallout and not a lot of color payoff. The highlighters look like they should be amazing but they have such chunky glitter in them and they don't show up on my skin at all. The darker shades are alright, the crease color on the earthy elements pallette is pretty but I'd never use a shade this shiny in my crease. The liner shade has a chunkier texture that I'm not really a fan of but the shade is fine. I won't be repurchasing these, there's so many drugstore palettes out there that are way better and easier to apply.

I purchased the &quot;Earthy Elements&quot; palette. The packaging for the palette is so nice, it feels so luxurious and I'm really glad it came with a double ended brush instead of the cheap eyeshadow applicators most drugstore palettes usually come with, it's so travel friendly! I'm very pleased with the pigmentation of the shadows (except one color, which was the matte cream color) in this palette. This is the first drugstore eyeshadow palette that I've bought in years. I wasn't a huge fan of drugstore eyeshadow because of the lack of pigmentation and the terrible longevity but this palette is ALMOST like high-end shadows. For reference, I usually use my Lorac Pro palette which has amazing pigmentation, blendability, and longevity. This milani palette is pretty comparable to the formula. It's very pigmented, buildable, blendable, and will last a long time if it's used with a primer underneath. I haven't tried it without a primer and I don't think I will because I always use a primer due to my oily eyelids. The only reason why I couldn't give it the full 5 lippies is because of the fallout and one color that didn't have much pigmentation at all. This eyeshadow palette is very pricey for drugstore eyeshadow ($10 USD where I live) so for something so pricey, I expect all the shadows to be great. Overall, I would definitely buy this again

I have this palette in Bare Necessities. Note: I did the look on the back of the palette, but it can be used for other looks as well. Pros -Great pigmentation -Easy to blend -Price (cost me $9) -Compact palette Con -A lot of fallout - I don't know if it was something I was doing, but there is a lot of fallout, especially with the lid shade. If you buy this, I recommend doing the eye look before putting on foundation.

I bought the &quot;Earthy Elements&quot; palette which has very pigmented coral, champagne and plum/brown shades. These shadows blend like a dream although there is a bit of fallout when dipping the brush into them so be sure to tap off the excess before applying. The packaging is okay, nothing spectacular, it doesn't come with a mirror but what do you expect for $12? There is a brush included which isn't horrible, could be used for travel. I use an eyelid primer underneath as my lids are oily and have not had any creasing or fading. The shadows wear well for the entire day, no change from time applied to time I remove (approx 16 hours later). Best drugstore palette for the money.

I was looking for an eye shadow palette that I could take care of my needs for my next trip. I don't like palettes that include lipgloss/stick. No matter how careful you are the powder always gets on the lipstuff and it's gross. Also, I didn't want to spend too much money. I stumbled on the Milani counter at my local Fred Meyer and saw these palettes. I immediately grabbed 01 Must Have Neutrals. At first I was a bit wary of the shimmery shadows because I don't like shimmery stuff. But when I tried them on my hand (at home, of course) I noticed that if I put them on with my finger they look pearly, not overly shimmery. The texture is buttery and easy to blend. I tried all the colors and I liked them all. I can use the matte black to intensify the look for evening. If I want to tone down the pearl I just dust the lightest matte shadow on top and it looks much better. I even like the brush. The package is very nice. Sturdy and expensive-looking. And you can't beat the price. Another bonus is that the taupe shadow doubles as brow powder. One less thing to carry. These work very well for me. I'm very pleased with my purchase.