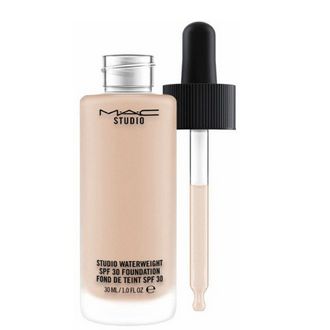 I wanted to invest in a lightweight base with decent SPF and, after much research, decided this would be a good option. It's EXACTLY the same product as Estee Lauder Double Wear Nude and the Smashbox BB Water however the MAC counterpart is considerably cheaper and has a more extensive shade range... Problem number 1. The shade. I've generally ALWAYS struggled in MAC because the shades are FAR too extreme for my neutral undertone. The only one that worked for me was Matchmaster because it is not NW or NC focused. Anyway, I decided to go into MAC and get colour matched, assuming that, because it was a lighter, less opaque formula, matching might be easier. Sadly not. The MUA really REALLY struggled and even advised that I was the most neutral toned skin she'd seen in a long time (which I still find odd but at least she was honest). I decided not to interfere and just let her do her thing. She matched me to an NW30 which, at the time I thought was bizarre/incorrect as the NW15 in SFF is far too orange on me! However I let her apply the makeup and wore it that day, taking home a sample. Throughout the day I thought it looked a bit orange but liked how lightweight it felt so didn't bother too much as I had a scarf on, thus hiding my pale neck! All going well? Not so much...3-4 hours later I was pretty oily... Problem 2. This has little to no oil control. I'm not a hugely oily person but this made me look greasy. To make matters worse, it also felt a bit itchy as the day progressed... Problem 3. This contains known acnegenic ingredient - Ethylhexyl Palmitate. Be aware if you are sensitive or breakout prone. Ethylhexyl Palmitate ranks quite highly on the comedgenic scale and is also a fungal acne trigger. That aside, I was still looking forward to trying the product myself the next day because formulas have a different effect when we add in our own products... Problem 4. This was AWFUL to apply, for various reasons: 1) NW30 was literally sunburn in a bottle. WHAT the MAC MUA was thinking is absolutely beyond me. I looked like I had put my face inside an oven and cranked up the heat. I was red. Properly RED. 2) My preferred application tool (a brush - I don't like fingers or sponges) accentuated ALL my pores and made texture SO visible. Because it is a watery formula, it just sinks in to pores and fine lines, highlighting them in the most unflattering way. 3) This has little to no coverage. I expected light coverage but this had almost nothing. I really did expected a bit more than this offered. You'd be as well not wearing any foundation and saving your £30. Truth be told, I actually had to remove this immediately after finishing my makeup due to the colour and feeling - how naive of me thinking I could make it work. Very disappointing. However, the crux of the situation came that night when I noticed I had broken out in some of the worst spots I've had in a long time. The foundation had to be the culprit as nothing else had changed in my routine. My skin just instantly hated it. The one (only) positive is that this formula contains SPF30 which is terrific. Otherwise, this product was pretty poor on numerous levels...and MAC MUAs are almost incapable of colour matching appropriately. To this day I still don't know why MAC's shades are so extreme, it's hugely dissatisfying.

I'm very mature and have pretty decent skin, I think. I prefer a foundation with a very fluid texture, sheer to medium coverage, just enough to even skin tone. I like some skin to show through. I've been using MAC F&amp;B for years, but I wanted to switch things up a bit. I received a MUA email about best hydrating foundations for winter, and Waterweight was listed, so, having had such a good experience with F&amp;B, I thought I'd give it a try. I absolutely love it. It isn't quite as fluid as F&amp;B, not as sheer, more medium coverage, still buildable. You don't have to work as quickly with it either. The finish is just beautiful, and gives a gorgeous glow. I use it with Smashbox Original Photo Finish Primer, then apply with my fingers and buff it in. I get about 7 hours wear. As for the dropper packaging, I don't mind it, but I think packaging like F&amp;B would have been fine and less cumbersome. At $36.00, I am very happy with Waterweight foundation. Still haven't used it during warm weather, so might have to switch back to lighter F&amp;B during the summer. But, I am very pleased with this purchase on this cold January day. FYI, I am C2 in F&amp;B and use NC20 in this foundation.

Loving this foundation. I have very dry skin and was struggling during the winter months with my Studio Fix, it kept clinging to my dryness and was looking cakey. These colours run way way lighter that the Studio Fix, i wear NC17 in Studio Fix but am in NC30 in the waterweight, it is ever so slightly too dark but its nearly summer here in NZ so wont be an issue in a month or so. The NC25 was really light, so i think i am an in-between for winter and may end up having to mix colours next year if im still using this. This feels amazing on, is more of a natural finish. It is medium at best for the coverage and not buildable at all. But that's fine, it covers enough and looks very skin like and natural like i have a healthy glow with all of my pores and imperfections blurred really well. I use the Stila one step correct primer underneath for my redness and also set it with the Mac Mineralize Skin finish natural in Medium Plus, and it lasts really well (about 10hrs +) but i usually touch up with powder around lunch time for my t-zone It does transfer a little. Not sure this would suit oily skin but prefect for dry.

I have been trying to go for a more natural look lately since my skin is looking more dry and dehydrated under full coverage matte formulas that I usually use. I have combination skin and don’t like the dewy look- at all but I do want to move away from the all matte look. This foundation looks nice and natural. it gives just about medium coverage when applied with a dense brush, I use the Bobbi brown full coverage face brush to apply this and finish with the Mac mineralize skin finish natural in light plus and it looks good. It does get oily throughout the day and the lasting power isn’t amazing in hot or humid weather. I would recommend for anyone who is looking for a more natural finish and doesn’t mind touching up during the day.

I love this stuff - just gives you healthy natural glowy skin! It's my 2nd fave base after SFF! I usually use a big fluffy kabuki to buff on Lancome Dual Finish powder and it gives me a glowy airbrushed finish that I love! These shades do run light. I use NC15 in SFF but in this I use NC25. I also like to use Hourglass Mineral Veil primer underneath or Glamglow illuminating moisturizer in Nude Glow. Good stuff!!

I really wanted to like this product as the concept of a lightweight foundation with spf 30 seemed ideal for summer. I can usually get reasonable performance from most foundations but alas not this one! I have tried it with primer, without primer and I could never get decent results even with the sheerest application . The initial application takes a lot of effort to avoid streaky results and after only a couple of hours it starts to break down and looks really messy. Initially I tried nc15 but it gave me a grey palour. Nc20 was better but the end result was still the same. I raised my concerns with a MAC manager and she candidly agreed that it was not their best product. If you want something similar try the NARS tinted moisturiser. This does give decent results.

Lightweight texture. Good for the skin feels good on the skin. Looks better with mac mineralize skin finish as a setting powder. It also holds about 3 to 4 hours with primer. It's really nice it looks really good like I cant believe I look this good! I'm 26 almost 27 for all those that think Mac is for youngsters I think it's for everyone ! The best recommendation comes from a mac expert stylist okay just in case you were wondering what fits you.

So, I pulled this out the other day and forgot how much I liked it. The SPF30 is the kicker for me. It's medium coverage IMHO, and not terribly buildable, but spot stippling with a brush is your best bet. I use this over oil, no primer, and it lasts, is dewy and is as easy to apply as any other water type fdn. Which means you need to work fast. I use damp hands, and tidy up with a sponge where needed. It's glowy enough for day, but adding a drop of highlighter nice. This is sheer enough to do the blush/highlight/contour under it. (see Samantha Ravndahl for more info).

I had given up on MAC foundations a while ago – not bc they are bad, b tbc as I’ve gotten older I find they do not suite my dry and textured skin. Enter this foundation! I am a huge fan of this foundation. Its light as a feather and feels like second skin, yet it still does have some good coverage. This has more coverage than I expected it to – you could say more than a BB or CC but less than Nars Sheerglow. I LOVE the dewy-ness I get wearing this, and my skin just looks so much healthier than with other heavier foundations. The color stays true and doesn’t oxidize at all, and I get no streaking or fading. I also feel as if I am getting a boost of hydration, and the additional SPF is great.

I really love this foundation, it looks truly beautiful on the skin and doesn’t sit in my fine lines or look heavy either, you do have to powder with this though. My other makeup sits beautifully on top also, I tend to use my Hourglass Ambient lighting palette with this. It isn’t the most hard wearing so I don’t wear it as my everyday foundation but prefer it for special occasions as it photographs really nicely.