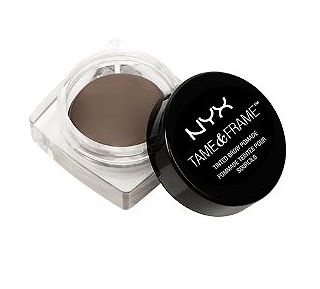 Logged back into this account after like five years just to write how much I HATE this product. It’s clumpy, and does not settle. I spent way longer doing my brows than usual. I use the darkest shade because my eyebrows are pitch black and it left a grayish finish. I’d recently been feeling soooo ugly when I took pictures and I realized it was because my brows looked WEAK AF. The packaging is also so bad. It’s just a tiny little plastic plate with not much product at all. Do not waste your money on this!!!

I literally don't get the negative reviews for this. This works just as well as the ABH Pomade. I have the most unruly, ugly brows in the world - they are big, ugly, and I need to pluck them. This thing straightens them down, makes them look neat and doesn't budge. I'm in love. It's cheap as well.

A solid choice for a drugstore brow pomade. Decent shade selection, 5 options from which I purchased Brunette. The formula is smooth, smudge-proof and waterproof, all qualities I look for in a brow pomade. I like the packaging as well. Instead of being in a small glass pot this is in a hard acrylic pot which feels much lighter but I like that because I’d rather finish the product rather than have it dry out on me and need to be replaced anyway. Solid performance from this product, just be sure to get a brush that works well for you and you shouldn’t have any complaints with this at all.

Ohh no this product was trash!! I kept seeing it as an ABH dupe but that’s not true, this stuff is barely pigmented and goes on patchy. I’m upset I spent like $8 just to have to throw it out because my brows were looking crazy with this stuff, I ended up having to use other brow products to make it look half decent. The texture is dry and crumbly so when you try to pick up more pigment you actually end up with clumps on your brush. I’m back to my L’Oréal pomade which works much better and is a lot more pigmented.

I really wanted to try an affordable brow pomade so I decided to try this, it's not bad but it's just not great. I think my problem with this is that you have to use a lot of product if you want a bolder, more intense brow. I think this pomade would be a lot better if it was just a tiny bit creamier. I ADORE the Micro Brow by NYX though! That's my all-time favorite brow product. Overall just not a huge fan of this ! Pros: -Easy to use -Affordable -Good shade range -You can get precise lines if you use a very thin brush Cons: -Can be hard to get very bold, feathery brows -Not pigmented enough -It's affordable but you need to use quite a bit of product -I like creamier brow pomades -I think it can be a tiny bit chunky sometimes if you use too much at once

I like this product for natural looking brows (while I find the ABH pomade much better for crisp, defined brows) but I still have to mix it with a brow gel to get it to the consistency I want. I use a bit the Colourpop brow boss &quot;clear&quot; gel (it's actually white) and mix with the Nyx pomade on the back of my hand. It isn't ideal to have to mix two products just to make one usable, but I don't actually like the brow boss gel on its own because it's too white, so mixing the two together is a good fix for me! Colour is a little too warm for me personally, definitely wish there was more of a colour range. Because it's so affordable and great for a natural look, I will probably repurchase. But I plan on buying the ABH pomade again as well, I wouldn't consider this Nyx product a dupe. I've seen some people saying that the Nyx pomade isn't pigmented enough, but it's called a &quot;tinted&quot; brow pomade so I don't think it's necessarily supposed to be as pigmented as the ABH stuff. Again, not a dupe, but still a good product :)

The pigment is actually pretty good, but it's not creamy enough. It's sort of dry and crumble-y already from the start. The price is definitely good, and I prefer it over the other drugstore pomade, Milani's Stay Put Brow, that I've tried. Not necessarily because it's a lot better, but because it's much more reasonably priced for the quality. I'm missing an auburn shade. I tried Chocolate, because I saw people recommending it as an auburn type shade, but it's far too cool to pass for that. To be honest, even if they did add an auburn shade, I probably wouldn't repurchase, simply because I went out and repurchased Anastasia Beverly Hills' brow pomade in Auburn when I realised Chocolate wasn't working out for me. I had forgotten how great ABH's brow pomade was in the two years since I last used it, and even though this one is so much more affordable, I still think the ABH one is worth splurging on over this. + Cruelty free + Vegan + Affordable + Pretty pigmented - Dry and crumble-y - No auburn/warm brown shade - Longevity isn't as good as I expect from a brow pomade. It looks a little smudged at the end of the day, and if I've spent time shaping my brows just so in the morning, I want them looking sharp all day

dries out super quickly but if you add some oil (rose hip for example) every once in a while, it works just fine!

I had high hopes for this as saw lots of good reviews on it. Felt too powdery, made my brows look dry (which is something I have never had before) the pigment is quite good but I couldn't see the size lasting very long and for a drug store product I don't think its that cheap in relation to others on the market

This is pretty clumpy for a pomade. Very intense, you have to be extremely careful when applying it. Not my preferred type of brow product. It's budgeproof throughout the entire day, however it's extremely hard to take off, I always ended up with scratches around my brow from rubbing.