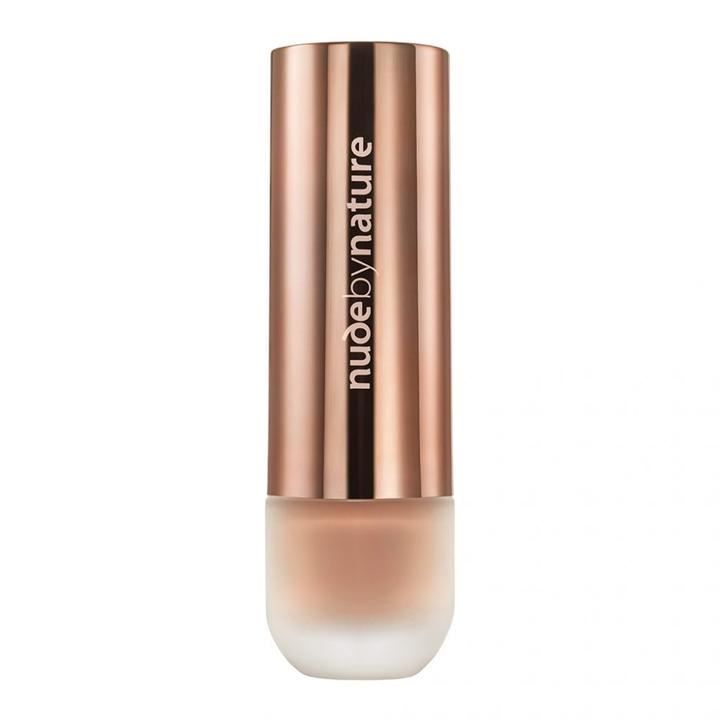 This liquid foundation is better than the other nude by nature liquid ones. I’ve been using this brand for nearly 10 years but finding with age that the coverage doesn’t hold and isn’t really buildable anymore. Comes right off during the day even after setting with the finishing powder. It didn’t break my skin out and generally Nude by Nature has been really great for letting my skin breathe but I wouldn’t purchase this again.

Worst foundation ever! First of all the color. I purchased the soft sand color which was very very light and yellow. Just horrible. Secondly the application - it would not stick to my skin as it pretty much just dried instantly and would not even spread. Just ended up a patchy dry mess. I new this foundation was a fail straight away and I didn’t even cover my whole face...just a small patch. Thirdly the cost - total rip off for what it is. I wouldn’t even consider giving this to a friend or family member...I just chucked it straight in the bin. I definitely won’t be buying again or recommending to anyone.

Holy heck. I have never tried a more unflattering foundation. The coverage was abysmal but worse was the streakiness! It grabbed onto every pore and whether I stippled carefully with a brush or used a sponge, nothing would even it out. Save yourself the money and the trouble of returning it. This is a terrible foundation. The only good thing was the pleasant packaging.

This has to be one of the worst foundations I have tried. It's supposed to be buildable, full coverage and matte. The texture is almost mousse like coming out of the bottle. It goes on splotchy no matter how it's applied, I tried beauty sponge and brush and both times it looked non existent on my skin. Because it does not apply well, or at all, it's not full coverage. The only thing I liked was the packaging, nice weight to the bottle and very pretty looking. Don't bother buying it will be a waste of your time and money.

I hated this. As a makeup artist I made the mistake of agreeing to apply the products a friend supplied rather than my own tried and true kit. i will never do that again. This foundation clumps to the brush and is difficult to get on the face at all and when you do it rolls into gritty little pills. Hate.

I was sent some samples of this in the mail. I’m so glad I didn’t buy it. It feels gritty upon application, is thick but hard to spread. When you do actually manage to spread it out, it has almost no coverage. This is such a pity - I LOVE their powder foundation. I will stick to my It Cosmetics CC cream.

For a chemist brand this is extremely expensive, especially for the fact it was horrible! I bought this product less than a week ago and have tried it with primer, without primer, with a beauty blender, on a flat foundation brush and a stippling brush. it was impossible for me to make this work. i love nude by nature and have never had a problem with their products so i thought i'd pick this product up too but i won't be making that mistake again. i tried using drugstore primers and even the benefit porefessional primer but no matter how long i sat there and tried to blend it but wouldn't budge. The packaging claims its "build able coverage" but when i applied this to the tools it came out very thick (making me think it was a full coverage foundation but this was not the case) it had pretty much no coverage at all, and the product would stick to the tool and not apply smoothly. it went patchy all over my skin and made my forehead breakout. would not recommend this to anyone

Definitely one of the worst. Has about the same coverage as a tinted primer, doesn't build at all, is lumpy and unblendable. I'm actually convinced this is meant to be used as a primer to the powder mineral foundation, except you could definitely get better primers than this as this is oddly textured. As others have said; you cannot, with any method, build this foundation. Not only does it take it completely off but it also turns the foundation beneath into an opaque goo that cannot be smoothed out but instead clumps and pills. If you want to use a lot, which is is necessary as there is very little coverage, you have to swipe it on in one go. Can't use a brush or beauty blender due to textural and buildability issues. It's lumpy even on the back of the hand - this wouldn't bother me if it applied well, but it doesn't and is demonstrative of the issues to come. It won't cover redness or unevenness, nor mask pores. Not to any degree. If you have very near perfect skin and want it to look like you aren't wearing anything (I mean like... you need to fool your own mother type of stealth) then this does so little in terms of coverage that it'd probably work (permitting you work around the other issues). There have been times i've put this on and legitimately felt I looked better with bare skin. Others, when pulling out all the stops to make it work, I felt like it did enhance, but not enough to measure to any of the other foundations I own. It doesn't look any more subtle than those either. I will say that the shade was great though. It's hard to tell with so little coverage when wearing, but looking at it before it's blended away it looks very youthful, neutral and brightening in colour. Other companies have wider shade ranges, but given it's sheer and neutral I think most people could find a shade. For reference, I had the lightest shade, and am #13 in Korean foundations (maybe NC/NW 10??). The packaging was also very nice. I'd recommend the company to fix the balling problem and market this as a coverage enhancing primer for their powder. Used sparingly as a primer without building, maybe I wouldn't be so disappointed. It has a gel texture which I think would likely enhance powder foundations. Even still, there's better in the market at cheaper prices. Sorry, but I wish I didn't spend $40 on this.

Watery and difficult to use. Can't use a makeup sponge, product just wipes off, looks splotchy and patchy. Certainly not "buildable", coverage is minimal. Is more like a tinted moisturiser in appearance. Complete waste of money, there must be dozens of mineral foundations better than this.

Worst foundation. Sticks to any tool you use to apply it with, worse for a beauty blender sponge as it dabs off it own product. Oils up a lot and the colour selection is very pink based. It doesn't compliment any skin type/tone. Would never recommend to anyone no matter what the price was..