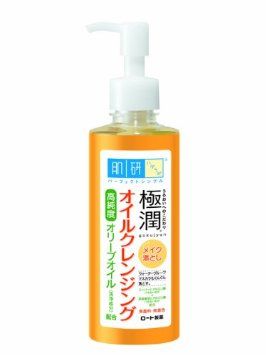 I learned about cleansing oils while in Japan. LOVE this stuff! I use it for facial massage every night while removing makeup. It easily emulsifies and rinses clean. Sometimes I leave it at that, and other times I follow up with Hada Labo Gokujuyn foaming cleanser.

This is the best cleansing oil I've used hands down! I'm on my second bottle. I've tried tons of different cleansing oils, cleansing balms and this is by far the best I've used. This is gentle and does not break me out. It removes everything after you massage the oil all over your face. When I'm lazy, I don't even bother using a second cleanser and my skin has never broken out. I have not tried to use this oil around my eyes though so I do use a separate eye makeup remover. This cleansing oil is well priced, decent sized, and the great thing is that you can buy refills without having to buy another plastic bottle! Highly recommend!

I've used about 10 bottles of this over the course of the last few years to remove sunscreen and makeup, before going in with a foaming cleanser. It's a no-frills, affordable, and gentle oil cleanser, and it gets the job done. It emulsifies wonderfully with a bit of water and then melts off like milk. It's actually fun to use! I use about two pumps for my face and neck. This oil cleanser is so much better for your skin than micellar water. With micellar water, you're dragging on your skin and tugging on your eye area with cotton pads, leaving it more susceptible to the formation of fine lines and a general loss of elasticity. With micellar water, you'll need additional effort to get everything off. This oil cleanser, on the other hand, glides over your skin and effortlessly dissolves sunscreen and makeup. I haven't bothered trying the other popular oil cleanser from DHC because this one works just fine for me (it's also cheaper).

Wow! This stuff is the BEST! It’s not expensive, the packaging is cool, and it really works to remove makeup, even stubborn eye makeup. I tiny bit goes a long way, you just put a pump in your hand, gently massage it onto your skin and around your eyes until the makeup dissolves. You can use a cotton pad, but it isn’t really necessary. Add a little water, continue massaging, then wash with a gentle, fragrance free cleanser, like Cerave or Aveeno. Skin feels clean without feeling stripped, and every bit of eye makeup is gone. I’ve had no irritation, no breakouts. What I love is that it has a luxury, high end feel and appeal. I will definitely be repurchasing this cleansing oil!

This is a great basic oil cleanser. I double cleanse and use this first as a makeup remover. It completely removes all of my face makeup and it does not cause any breakouts or irritation. I don't like to rub my eyes too much so I use a separate eye makeup remover, although I have tested this around my eyes and it did not sting.

I've used this cleanser on/off for a long time and always thought highly of it; it removes my makeup really well and is one of very few truly ragrance free oil cleansers. I'm very acne-prone, but I don't usually get any spots if I'm taking care of my skin. For the last couple months this has been my sole cleanser, and man have I been breaking out. I never suspected Gokujyun because I've used it for so long, but I hadn't taken into account how sporadic my use of this stuff has been. I gave it the benefit of the doubt for a while because my breakouts coincided with changing up my cycle (I didn't take a break from my contraceptive pill for 3 month, under a nurse's guidance, because I was going on a road trip), but I've had two cycles since then and if it was hormonal I would've expected it to have calmed down by now. I also would've expected the breakouts to be a lot more concentrated around my jawline, as they usually are for me when hormones are to blame. I recently introduced a moisturiser that has shea butter into my routine, so I guess it could be that, but after reading another reviewer's warnings about ethylhexyl palmitate being comedogenic for certain types of acne sufferers, and seeing as I've tolerated shea butter well in the past, all roads are leading to Hada Labo being the culprit. CosDNA rates ethyhexyl palmitate as a 4 on the comedogenic scale. I don't heed the scale to the letter, but it really is a useful pointer if you've noticed a change in your skin for the worse with a particular product. I've given it three lippies because it really is such a good cleanser and I wouldn't want to put anyone off using it when competition is so thin, there are so few decent oil cleansers! Such a shame it looks like this cleanser is to blame for the breakouts, I'm cutting it out effective immediately, I'll follow up with results.

Looove Hada Labo products in general, THIS particular product came into my attention thanks to Dr. Dray on YouTube. She raves about the product, and incorporates it into her NO NONSENSE tried-and-true routine (that includes tretinoin &amp; salicylic acid). The 2nd best selling point for this cleansing oil (besides it being Hada Labo: the most popular Japanese pharmacy brand) isss N O F R A G R A N C E &amp; essential oils! I had to sell a couple of my oils because of the insane amount of fragrance: like the Banila Co. cleansing balm! This takes off my makeup very nicely including my mascara, just as fast IF NOT faster than the other oils that i've tested. FULLY recommend: It's affordable, it's efficient &amp; suitable for sensitive skin &amp; skin on tretinoin!

Ive used Butts Bees, Coconut oil, Chanel LHuile, Heimish Cleansing Balm and Sulwahsoo cleansing oil. The Hada Labo one is one of the cheapest and works the best imo. It doesnt have fragrance like the Chanel or Sulwahsoo. It foams when in contact with water. Rinses really clean while it doesnt strip the skin. It doesnt break me out like the Coconut oil and Hemish Cleansing Balm. After trying so many, ive decided this Hada Labo one is far superior in price and performance.

This stuff is the best because it does NOT burn my eyes!!!! Every other oil cleanser I’ve used burn so bad! Including the neutrogena one and the Burt’s bees oil cleansers. When I used just plain coconut oil it was like I couldn’t see for the next 30 minutes. This one doesn’t burn, doesn’t mess up my eye sight, is a good price, doesn’t break me out, it’s perfect! I’m already on my second bottle and I have no plans to ever change it.

Me: rosacea combination super sensitive skin. Old AF. (Did I mention old?) I wear sunscreen every day, on sunny days heavy ass sunscreen. I am burning through this like wildfire. I use 3 pumps at night and feel like I HAVE to double cleanse which was never my problem with Clinique's cleansing oil. [I also like BareMineral's version but looking for cheaper. (Who isn't?)] Hada does not remove all of my eye makeup (so I am back to using a separate eye mu remover) or foundation/sunscreen at my hairline. But I like the consistency and the fragrance free aspects. It is conditioning and kind to my skin. Bottle is functional if you keep the vice lock that comes around the neck, if not you'll have to transfer to a travel-safe bottle. First time shipping was delayed for weeks. IMO it's worth it to pay a little more for prime prices and to get it in 2 days. I started out loving this until I saw the same mediocre results again and again and the quantity decreasing exponentially. Why does something this simple have to be so hard to find, purchase and love? And I don't want to make my own--tried that at least 10 years ago and it was an epic failure.