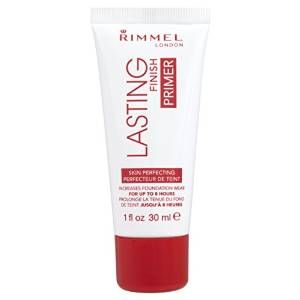 For reference I have oily combination skin with acne scars and Minimal active acne. This is quite a decent drugstore "all-around" longer lasting primer. For my skin type I probably would skip it during summer time because it does nothing for oil control, but for cooler months and wintertime here in Canada it makes whatever foundation I put on apply a lot smoother and also blurs out my pores a bit. I'm not sure about the "+8 hour wear" claim but at the end of the day my makeup definitely looks more intact then without the primer. I have the Clarins Beauty Flash Balm and I feel like I'm getting the same effect. I also like the fuss free packaging and it is perfect for traveling. I think the trick to any primer is not overusing it. I use just a pea sized amount and it covers my entire face (and boy do I have a big one so if that's enough for me it should be enough for everybody else on the plant). I think I might repurchase if I ever run out (I'm have too many primers though) and I would recommend to others. Just figure out your skin type and use accordingly I think you would enjoy it.

Had high expectations for this oil free primer, however, I'm learning that oil free still doesn't mean that it is a good product for oily skin! I don't mind the texture, a little definitely goes a long way, you don't use the same amount as you would a moisturizer. I can see why people say it's like elmer's, certainly has a tacky quality to it. This primer does make me more oily, and I suspect it also made me break out horribly as this is the only different product I have been using on my face :( haven't broken out this bad since high school!

This has to be the best primer I have ever ever used and I cannot bel;ieve it comes from rimmel. Its like glue, but in a good way. I use it under charlotte tilbury magic foundation. I have very dry skin and always suffer from under eye creases but thanks to think I feel flawless

On my second tube but it took until yesterday to convince me it had any staying power at all. Usually I wear it under TF Born This Way foundation and don't notice it improves longevity, but when used under Rimmell Velvet Mousse it extends wear time from 3 hours to 7 so it deserves some massive kudos for that. It's not my favourite primer but it's super cheap and my skin is extra dry in winter, so I do like a thicker emollient formulation. The packaging is travel friendly but the tube dispenses a lot if squeezed and not a great deal of control for non-pump design. It is lightly moisturising, sets quickly, but it doesn't colour correct or blur imperfections, nor does it minimise pores but it does create a smooth base to fill them. We tend to expect magic from our primers with the market filled with such hard-working products which promise 9-1 benefits, and this is not one of those babies, but for its price point it does a good job of preparing my skin for base make up and extending the wear and performance of cheaper foundations, so will repurchase, especially as my skin needs some more emollient TLC in winter. Great value.

Not impressed. For my combination skin this was inferior to other primers. Pore minimizing...maybe, skin perfecting, nope. Even though it's dirt cheap put your money into HardCandy primer if you want a cheap product that delivers. Sorry Rimmel, this just made my foundation look crepey and it didn't do much for softening flaws

I generally use Rimmel's matte primer, but this was on sale and I was wondering if the grass was greener and gave it a shot. My first impression was that this is less blurring than the matte primer, which I wasn't thrilled about. It feels like rubbing sunscreen on your face rather than prepping it. After using it for a bit, I can confidently say this is the WORST primer I've ever used. Instead of making my makeup last, it causes it to separate and cake. I mean, it's awful. It manages to separate all my foundation while also highlighting exactly where I've applied concealer under my eyes and over blemishes. Honestly, just the worst product ever. Stick to the matte one if you're a fan of that. I'll be throwing this out.

I bought this primer thinking that it would make my makeup last longer than usual, but that was far from what I was expecting. I have oily skin and I thought it would make it last longer, as the name states. I apply this before my foundation and it comes out very white, like Elmer's glue. It goes on the skin very greasy but settles into the skin after a few minutes. My face became oily throughout the day like it usually does. I could've fixed it with some powder but I feel like this is a trick product. It doesn't say mattifying, but when it says "8+ Hour Wear", you would think it would keep your makeup in place and it doesn't. I would only recommend this for people who have dry to very dry skin and that's about it. Don't fall for the name!

Didn't like this whatsoever, it made my foundation rub off and look cakey. Plus the smell is really bad.

If you have dry skin this primer is for you. I bought this on a whim. I tried other Rimmel primers in the past and liked them so I gave this a try. Firstly, its stark white, thick and heavy. I looks like the Elmer's glue that everyone is saying. It requires some effort for blending. It looks greasy at first but settles into a moisturized look. My skin remains tacky feeling though. I don't notice the disappearance of pores but I did notice that the dry areas of my combination skin remain hydrated throughout the day. I had an area near to my nose that got dry during the day and the foundation flaked and exacerbated the problem. It seems that the primer locks in the moisture and acts like a glue for the foundation. This foundation is not terrible but I prefer a more weightless feel and a smoother base for my foundation. I could see someone with really dry skin appreciating this foundation. It may also work for someone who wants to wear full coverage foundation. I tend to use tinted moisturizers on an everyday basis so I'll pass on the foundation for now. If I have a dry skin issue in the future, I've found the primer for that.