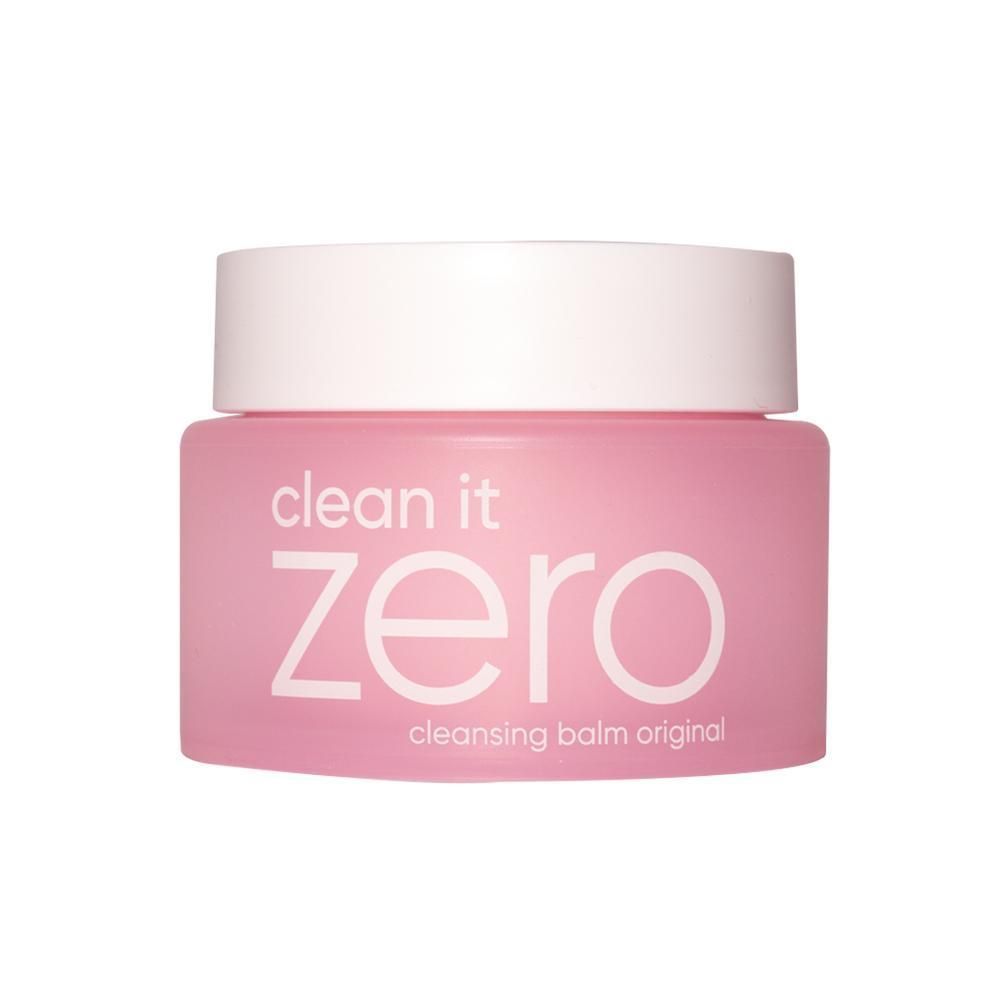 Goddd I really wanted to love this balm cleanser, it's cheap, it's Korean and they got rid of microplastics in their reformulation! And I do like it! Compared to the famous Clinique Take Off The Day Balm, this one is more dry and powdery If that makes sense. The Clinique one is definitely more oilier and wetter and is easier to make a lather with less product needed but I prefer the dryer texture. It leaves less of a oily residue and doesn't make me want to get rid of it right away, as it feels less of an oil slip like the Clinique one.I hope what I'm saying is making sense and I'm not crazy so far. The packaging is superb too, the repackaging (along with reformulation) overhauled the old outdated design to this new fresh and young look and I'm 100% here for it. It feels super sturdy with a thick plastic, and it also comes with a bonus spatula to scoop it out, along with a plastic tray that holds the spatula that fits inside the thing and you can seal it with the spatula inside. A very thoughtful gesture but I prefer just scooping it out with my finger, just saves time and i don't want to clean the spatchula all the time. The only gripe I have is the scent, it's terrible and is the sole reason I'm not going to repurchase it. It's like a cheap-perfume grapefruit smell and while it's not super overpowering I just don't like it. I'm going to look into the Nourishing version, I've seen a Korean reviewer with combo skin say they've tried all versions and likes that one best, so that's where I'm headed when I've finished this one. I would recommend this to most people though, great value and great quality! EDIT: After some time of use, I found that this does a pretty good job of breaking down all makeup except for eyeliner (potentially mascara then), it takes a bit of effort to get it all off. It also definitely doesn't neutralise makeup as efficiently as Clinique's. They're harmful to the ocean, though it's probably why it makes it so good. It's also quite expensive too. Clinique also sadly has microplastics too (Polyethylene) and hasn't changed it, and it's probably the reason why it makes it so effective and emollient. But no holy grail product is worth enough to harm the ocean.

I did not like this at all. I found or left my skin dry and feeling tight.

Ahhh the one who started it all.. the cleansing balm hype.. And I can really see why! It removes makeup relatively well however I bumped down 2 lipsticks for VERY significant reasons: Here's a brief list of my pros &amp; cons during my experience: **Note: Also want to point out that this is a MINERAL OIL based cleanser. This is NOT a pro/con. Just letting you all know.** **PROS: - Melts away makeup quickly - Don't need to rub like crazy on the face - Non-comedogenic - Fairly priced - Made in Korea - From a reputable, well known company **CONS: - HEAVILY FRAGRANCED. DO NOT BUY IF YOU HAVE SENSITIVE SKIN!!!! - DOES NOT break down mascara efficiently: I'm using the maybelline lash sensational non-waterproof &amp; I really have to rub my lashes for the product to work. No bueno. For the insane amount of fragrance in here, that alone will stop me from EVER repurchasing this product. Right now I'm trying out a Japanese cleansing oil sans fragrance/parfum. Will let you all know how that goes

New love for the first part of my dual cleanse! Easy peasy to scoop and apply to my hand with the little paddle. I think it does an excellent job at grabbing everything off my face, though for rinsing, I prefer a full on shower, not splashing in the sink. I willow up with a water-based cleanser (cosrx good morning) and feel darned clean, but not stripped. This jar has lasted me quite some time, too, but is a good enough price to feel comfortable scooping a generous amount out. I’d probably play with trying out other oil cleansers just to mix things up, but I’m not looking for a replacement.

There is I hate taking off my Make up at Night GOD!!! How have I lived all my teenage, 20s Thirties &amp; even a few years of my Fourties without this??!!? I'm in love! This is not only thouro in taking off every trace of black eye makeup but it feels luxurious on your skin as it soothes you somehow. This stuff is just that The Stuff.

I've been using this for just over a year now as part of my double cleanse and I really like it! It does what it claims to do: it melts away all my make up and leaves my skin pretty make-up free. It even removes my stubborn Stila stay all day eyeliner pretty easily :) However, it does leave a slightly greasy film on my face after I use it, which is why you should probably use another facewash to remove that film. It also tends to get into my eyes whenever I remove my eye make up and blurs my vision for a couple of seconds, but washes away pretty quickly and has never irritated my eyes, so I don't mind too much. Scent-wise, it smells a little sweet, but nothing too over-powering. This product comes in a soft balm-like texture which melts immediately when you rub it onto your face. It doesn't tug at your skin and it has never irritated my skin before. You're also provided with a little spatula to scoop out some of the product, which comes in pretty handy. It's a little pricey (I'm a college student), but it's alright, considering the fact that I use this daily and it lasts for about half a year or more :) I'm currently on my second tub of this and I reckon I'll probably repurchase it once I'm done! Would defo recommend this (:

Pros -Great balm texture, doesn't drip everywhere -Makes subsequent cleansing gentler because of the slight residue it leaves behind -Removes makeup and sunscreen -Non-irritating. Fragrance didn't irritate my skin. -Didn't mind the jar packaging because how else are you going to package a balm, and also because there's a spatula so I don't need to dip my fingers inside. It's a wash-off product so no big deal. Bar soap is hygienic, so why can't this balm be in a jar? -Not too expensive but more expensive than drugstore prices (pros or cons depends on you) -Update: A single cleanse for me is enough to remove sunscreen (I don't wear make up) and blackheads. The trick is to apply a thicker layer and wait a few minutes. After many splashes of water and a towel wipe, my skin feels clean and a tiny tiny bit tight. -Makes it easier to squeeze out sebaceous filaments from entire nose. -Seems to lessen the redness of my face and make my skin brighter temporarily after I wash it away Cons -I just found out from a blog that microplastics like polyethylene are bad for the environment. Apparently, it's a common ingredient in cleansing balms. Edit: The newly reformulated balm doesn't contain polyethylene. Hooray! -If you are only using this balm to cleanse you face, you might want to use a towel to scrub your face because this balm leaves some white residue on my face if I just splash my face with water a few times. Not sure if this is an issue for cleansing balms in general -if you are looking for an oil cleanser, there are cheaper alternatives. I haven't tried other cleansing balms but this one is decent.

It removes everything. It melts my makeup and my skin and eyelashes get very clean after.

I ABSOLUTELY LOVEEE this stuff!! it's the only thing that melts off all my makeup super easily, and i love how it's basically a double cleanse in one. you massage the balm into your skin until it becomes an oil cleanser, and then once you add water it foams up nicely to thoroughly cleanse your skin. the only downfall is the packaging- it can get super messy and gross since you are digging a spatula in every time, but if you're careful its fine. only cleanser i regularly use !! would never swap it for anything !

First off, this does what it's supposed to. It removes makeup without too much work and effortlessly melts away makeup which is a huge plus. I think many people massage this onto their face in order to remove makeup, but gently applying this to the face is sufficient in melting the makeup-- the key is to apply and wait a minute as the formula does the removal of the makeup for you (it goes from creamy to water on the face) so that we don't have to rub or scrub our skin which can be damaging. This had a cult following for the past year+ but holy cow, did anyone read the ingredient on this thing? I wish I researched a bit did before purchasing-- I bought into marketing and made the mistake of purchasing this item and it now just sits on my makeup cabinet just collecting dust-- it's chock full of mineral oils, PEGs, BHT and parabens which not only causes irritation but is extremely toxic for our bodies and the environment. This is not okay with me because in 2018 with our amazing science breakthroughs and technology, we should have products that perform well without destroying our health or the environment. The product is has a nauseatingly strong scent, so this product is definitely not for people who are sensitive to fragrances. Toxic ingredients aside, I did not particularly enjoy using this product because of the very nauseatingly sweet fragrance, how the product made my vision blurry for minutes after using a small amount just enough to remove eye makeup and also because it left a grimy film on my face after. I had to really work to get this product off fully and that effort and irritation on my skin as a result, was not worth it for me. The only thing I did like about this product was the cute and sturdy packaging and the spatula it came with a space for it inside the lid (if only all cosmetic companies started doing this!). There are products that work just as well or better than this product for even less price WITHOUT all the toxic chemicals and irritants that are in this balm. I still prefer my DHC cleansing oil and The Face Shop's Rice Water Cleansing Oil for face makeup remover (I use separate remover for eyes). I do not recommend this balm and will not repurchase. Ingredient list: http://cosdna.com/eng/cosmetic_07e0271755.html