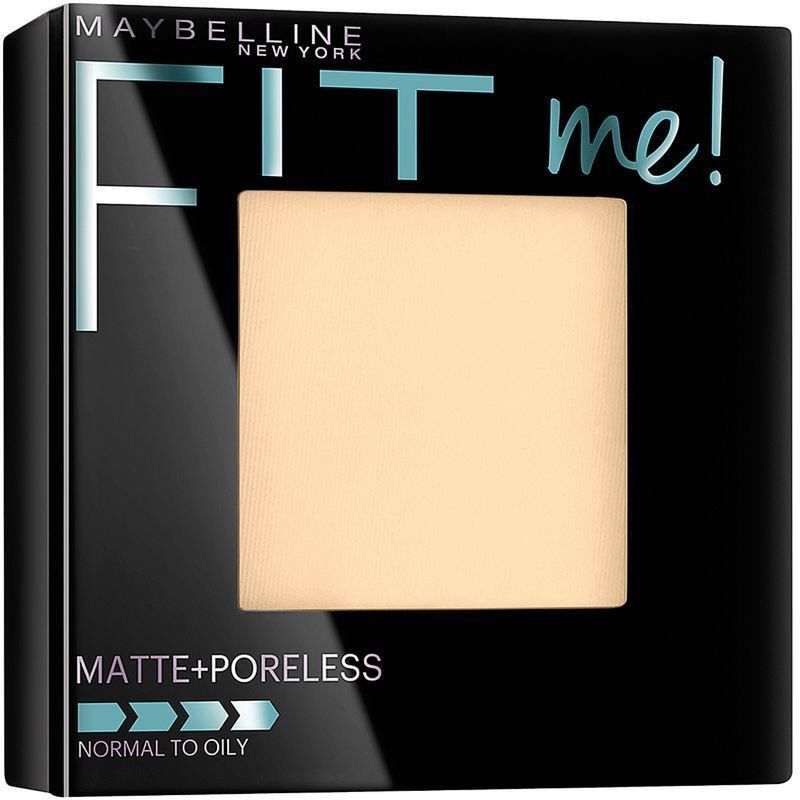 The more I use makeup, the more I realize I enjoy using powder foundation over liquid foundation. I have finally hit pan on the 235 Pure Beige Fit Me Matte + Poreless Pressed Powder that I purchased from Target in October 2019 (that's over 3 months of use, which isn't bad for the price - I paid $6.59). The color was a great match for my skintone, and the formula looked very smooth on my skin. I would probably repurchase this, but only once I have finished the other pressed powders I own. If you are in the market for a pressed powder foundation, I would definitely recommend trying this one as the formula is nice and they have a lot of shades to choose from.

MY HOLY GRAIL POWDER!! &lt;3 I use the shade 230 buff beige WHAT I LOVE: - Much affordable than L'oreal's / Revlon (it's either loreal or revlon. both are pricier than Maybelline) - Very finely milled powder which i love for setting my concealer. I don't use loose powders. - It leaves a smooth+poreless skin after setting the foundation/concealer. - The tint of colour from the powder evens out the skin tone. - Very light and comfortable on the skin. - Good lasting power for a lot of skin types. - One of the top drugstore powders for oily skin. - Maybelline changed the powder's packaging. It's very sleek, looked expensive. I appreciate that they changed the packaging very much. Having the mirror being at the back of the powder from their previous packaging has really annoyed me. I also appreciate that they changed the amount of product from 8.5 grams to 9 grams. WHAT BOTHERED ME (i'm still okey with it): - The shades don't exactly suit Southeast Asian skin tones that well but since it has very sheer coverage, i can work with it. and besides, i wear hijab so people wouldn't know the difference. It is a rather good lasting power for oily skin. I've tried Rimmel Stay Matte Pressed powder and honestly fit me is better. Some say L'oreal True Match pressed powder control oils better but i'll have to try that one first later. I know that L'oreal also got pressed powders as good as the maybelline fit me (well they are in the same company). i chose fit me as my holy grail because of the price of course xD and i just noticed, L'oreal got a lotttt of powders. I'm a powder junkie, will try more of L'oreal powders soon. I've only tried the pro matte pressed powder so far. It's quality and performance is super identical to Maybelline fit me's. and the ingredients of both Maybelline and L'oreal's powders are super identical too. wow I don't use cream products that often anyway because of my oily skin. I like to use this powder for everyday. I do get oily after 5 hours of wearing but it's a healthy glow. Besides, i'm a student, living in a humid country in Southeast Asia. I struggled finding my exact shade in powder foundations very much. Since this powder has a very light/sheer coverage, it leaves a very natural tone for my complexion. for added coverage, i used a powder foundation (only to cover blemishes and dark areas because the colour is too dark for my complexion). Then i'll use bronzer, blush and so on. I also like to use this powder on dancer/performers and clients. I know that not too many people around me have extreme oily skin like mine which is why i trust this powder's performance on others. Besides, the smooth finish this powder gives is just breathtaking.

update December: this winter I'm loving using this more and more. and it's lasting longer on my face, so it's possible I didn't like it more during those final summer months. which makes sense, I feel like all my makeup is settling better in winter. it's very thin, it's all gone in two hours, unless I layer other powders under it. it really doesn't last long on oily skin areas even If I apply so much, so on its own it's too light, so on top or under something else , it's ok. also product moves around too much I suspect,so it's best applied as a last step because its formula is too fine I bought it for 9.3$ which is reasonable for a powder. shade 230 natural buff , I had intended to buy a powder foundation but it's a bit more expensive and I don't usually spend much on a powder, and I have another but it's not totally in my skin shade so I got this. it came in a light ,black and round packaging, it didn't break no matter the handling so far which is good, no puff or mirror though which is a negative. but I'm not mad about that entirely, I have puffs and mirrors. I put a small puff in it and it's fine. also the clasp is annoying, a magnet would have been better. 14 grams in it which is a bit more than the other one I have, I like that it has more though it falls out a bit, so be gentle with it , works well with other products, It has a very fine formula blends well ,applies well with puff and brush, does not last so much on my oily nose but that happens with most products, I liked the pore-less texture-less finish and color, mostly I feel it's a simple setting powder. light medium coverage , for that I love it on my cheeks most.

I ran out of my HG foundation powder, so I picked this baby up in the meantime. Overall, I'm impressed as I wasn't expecting much. The texture is very light &amp; soft-like. A major plus for me is that it did not emphasize any of my texture or pores. Most powders tend to look patchy &amp; cakey, but I personally did not find that with this one. I did also moisturize well beforehand! It isn't full coverage by any means(more on the light-med side), but it's good enough for minimal makeup days. It comes with a round applicator, but I prefer my brush. My biggest con is the mirror placement. It's on the backside of the powder, so it's a bit awkward having to keep flipping back &amp; forth.

Bought this because of the positive reviews on MUA, which seldom steer me wrong - but this was one of those times. I HATE this powder - it's heavy and makes my face look totally flat. It lays on the skin and looks obvious rather than buffing in beautifully like the MAC care blend or mineralise powders I was using previously, and it's not even great at oil control like MAC Blot. Should never have deviated from those, but when a friend accidentally dropped and shattered my MAC one, I wanted to try a cheaper alternative for once. Definitely learned the lesson that with powder you seem to get what you pay for - buy cheap, buy twice in this case, as i had to get a couple of alternatives. Don't want to waste this so am using it to set my eyelids and occasionally for days when I care less about my complexion - but I have to use Hourglass Ambient Light Powder or bronzer to add life back into my face afterwards. Hard pass from me.

My favorite pressed powder on the market right now. I just use it on no makeup days. The texture is perfect, it provides just a little bit of coverage, and it also sets concealer. I will buy again.

It’s a pretty decent powder, but there is a reason for dermatologists to advise not to overuse powders / loose powders as they clog pores. Also it emphasizes dryness on the skin) But still a good powder, worth purchasing.

Pro -This powder blends in with all the foundations I have used -It doesn't make those foundation blotchy -I love that there is a mirror -I love that there is a round sponge -It does cover up my pores Con -clings to dry patches -won't cover up imperfections on its own Application tip Pat it on, only pat I usually apply a lot and then get rid of the excess with my hand so it doesn't look cakey (it looks very good when my face produces some oil)

Love this powder. Not cakey or to dry. Gives good coverage, can even be used on its own without foundation for a natural look. Good colour &amp; smooth finish, no orange effect. Price is good. Matches up to the more expensive brands. I swapped from Bobby Brown sheer finish powder to this &amp; loving it. Only negative is that it does not come with a mirror or an applicator sponge. Otherwise I love this product. Love the black pacakaging, makes it look elegant &amp; not cheap.

I love this. I have always got a high end pressed powder and for a long time have used Clinique Stay Matte. I can get an oily forehead. I forgot my make up one day at work and popped into Boots and picked this up to keep me going. I’d read pretty decent reviews and it was inexpensive. It is so good and really lasts on me. I will definitely get this in future. Great value. £5.99 as opposed to twenty odd quid. Also ideal to wear on days where I don’t want foundation but would like coverage. For the review below, the mirror and sponge is in a compartment underneath the powder.