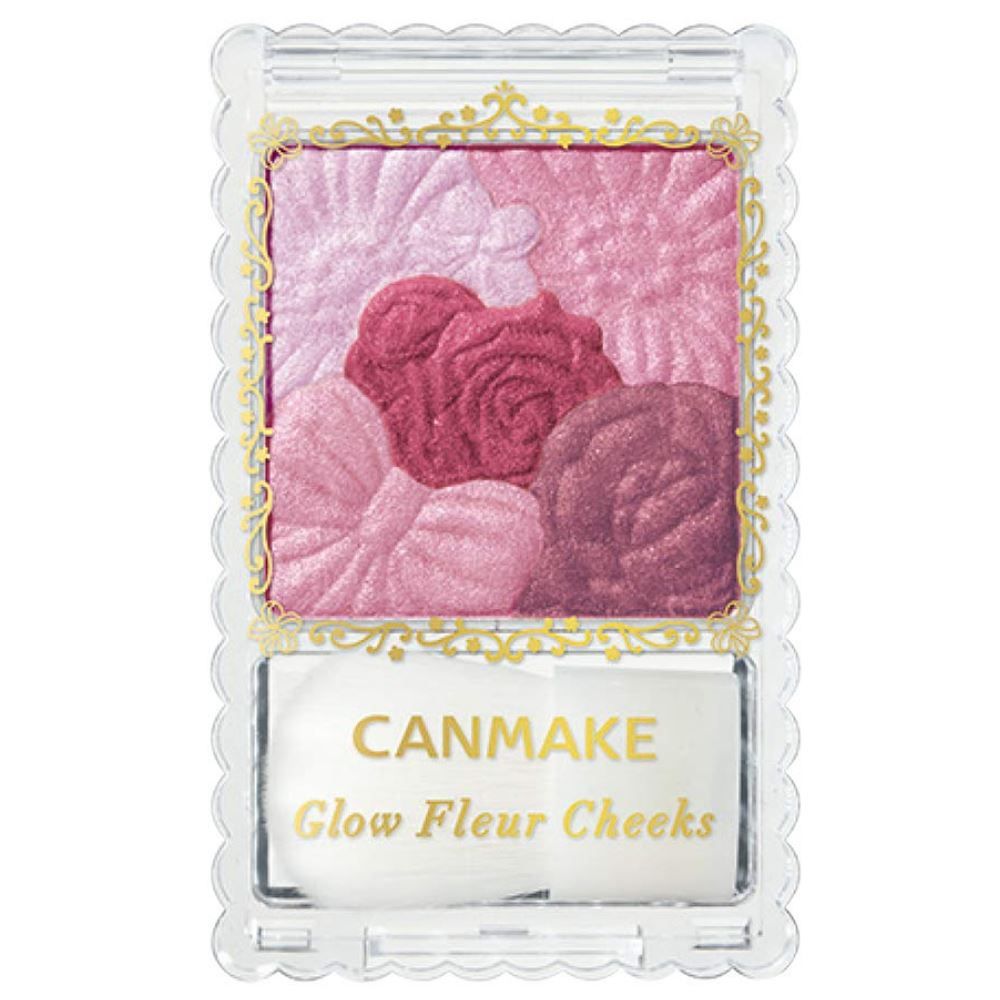 I love these! At first I was a bit apprehensive cuz I thought that application would be uneven (considering the different colours) but after swirling my blush brush I found that application was smooth non patchy. The powder is very finely milled and doesn't enhance my pores. It's a really lovely blusher to use, colour pay off is quite light but buildable, gives your cheeks a natural glow without looking like a disco ball.

I have milky red fleur (06), and I absolutely love it. The finish is nice and smooth and doesn't emphasise pores, while providing a beautiful pinky red glow. I've been using it for about a year now and I'm going to pick up more shades when I'm back in Japan! Even if this were more expensive, I would buy it again because the quality is just so good.

To be honest I really can’t recall I bought this until my recent makeup housekeeping. I got one in 05 wedding fleur. To my horror, my blusher will be expiring in sept this year but I still have a few more months to use. Firstly as this is cheap , I can accept the packaging. The is a super small brush which I do not use but it’s really cute and nice when dabbed with the powder. The plastic is quite flimsy. For the payout 05 is very pigmented but still acceptable. I just go over with some compact powder if it’s too much. It really gives a nice glow which I like and can last throughout my working day. Overall I will definitely recommend and try out other colors.

Easily one of the best blushes you can get regardless of price. Powder is finely milled, making it soft and don't contain chunky glitter. It has more of a pearly sheen that doesn't accentuate texture. Pigmentation is such that when applied with my RT blush brush I get payoff for a natural flush (swirl 2-3 times as per instructions) and it is buildable to achieve a high-payoff/ gradient look. Shades in this range are typically light and natural as per Japanese preferences. I got this in the Limited Edition shade no. 8 (cool fuschia pink, a more intense shade that complements fair skintones). Highlight is very very subtle (top left corner) It has great lasting power even with combination of oily skin + tropical weather, easily 4-6 hours on bare skin and lasting whole day when I do set/prime properly. There's virtually no fallout. Packaging is compact and highly portable, with a decent brush included to apply. I love the floral pattern of the pressed powder, which also doesn't dissappear after a few uses (powder is packed firm enough). The price is highly affordable. Would purchase again!

Best blush I have ever purchased. I bought the pink with a little of red version (?) of it, it applies very well on the cheeks and the colors are absolute GORGEOUS. For the record I love the Japanese-style makeup compared to American, so this blush really gives that very cute flushed cheeks that looks super natural. I also like the brush it comes with, it's white with white bristles so when you dunk it to the blush it gives a nice pink gradient color which is adorable. (I love pink if you can't tell) On top of all that this product is very inexpensive. I was so bummed when I realized I broke mine and can't use it anymore. I'm a cheapskate so I didn't buy a new one immediately because it's pricier where I live, so I'll just use this time to try on other blushes.

OH MY GOD THESE ARE GLORIOUS, WHY DIDN'T I BUY THEM IN EVERY COLOUR? I purchased these in #1 Peach Fleur, and #5 Wedding Fleur. Both warm pinks that are the right amount of pearl, pigment, and smoothness. It applies so well on the cheeks, isn't finicky with the brush that you use. In fact, the brush that it comes with is useable and not scratchy. I like this blush more than some of the higher end lines that I can purchase in Japan. For 800 Yen, you are NOT going wrong with the blushes in this line.

Bought no. 3 when I was looking for some light peach orangey blush after reading many good reviews online. And it didn't disappoint me. The pigmentation is on the light side, but I think after using some heavy pigmented blush, I'd prefer a lighter but buildable blush for daily use. The no. 3 gives a healthy light peach color for my Asian skin. It has become my favorite, the one I am reaching every time I put blush on, because it looks very natural and easy to apply for daily make up. Although the name has the word &quot;glow&quot; but I find it appears quite matte (which is just perfect), not sparkly or glittery. Packaging maybe a bit flimsy, but the size is pretty compact. The brush is too tiny so never use it. Better to use a decent blush brush for it.

Like the other reviewer said, these are kind of similar to the Anna Sui Rose Cheek Color blushes, but they are a fraction of the price, even when you factor in shipping from Japan or Hong Kong. Given that the Anna Sui blushes are my HG blushes, I was kind of skeptical about trying these at first. Canmake is a lower-end Japanese brand. The brand is not bad quality (although they do have some total duds- the Jewelstar Eyes eyeshadow is essentially useless and the Colorful Nails nail polish ranges from bad to middling depending on the color I've found), but it's considered to be for younger women- middle/high school girls seem to be the target market. But the Glow Fleur Cheeks blush just blew me out of the water with how good they are. I only have 03 Fairy Orange Fleur, but it's quickly become one of my favorite blushes and I'm looking in to getting the others. While it doesn't smell quite as nice as the Anna Sui blushes, the texture is comparable, as is the color payoff. For the price, I was very impressed. However, with all things, you do get what you pay for, and in this case it was the packaging. I'm always so scared using this because I'm afraid I'm going to break the flimsy plastic packaging. I've already had the lid come off the hinges- thankfully nothing broke, but it was a tense few minutes trying to fix it. If you're interested in the Anna Sui blushes but can't go for the price point, or even if you just like pretty blush in general, definitely give these a try.

There are 5 of these released so far and I own all of them! I actually keep a note on my phone with a list of all of the Canmake products I own so I don't accidentally buy duplicates hehe. These were released maybe a year or two ago. This was released before the new Matt Fleur Cheeks, but after the Cream Cheek CL (Clear) series. The Glow Fleur Cheeks are a series of blushes released by Canmake that was essentially a dupe/released in reaction to the Anna Sui Rose Cheek Color blushes. Both look similar, though obviously packaging is different and of course the price point is drastically different! I own one of the Anna Sui Rose Cheek Color but I believe it was the blue and white highlighter one that I bought, so I can't compare unfortunately. However, I really like these fleur cheeks from canmake just by themselves! These contains five colored roses in the compact and basically you're supposed to swirl them together to use. The pan is large enough that I can limit my brush to just a portion of the pan, but generally you'll be touching arund 2-3 of the roses with your blush brush. each rose is just too small unless you're using an eyeshadow brush! I normally take my blush brush (from Lancome) and pat into the color portion, then tap into the highlight and go over the blush on my cheekbone. It's pretty nice to not have to reach for a separate highlighter! The powder isn't so soft that it kick up dust (thankfully, those annoy me), but they're not so hard that you really have to gouge at it. The rose design goes pretty deep, I had to use it for quite a while before the rose design really start to smooth down. Since it is &quot;glow&quot; it does have shimmer particles. They're never that large though, in fact the shimmer in these blushes are WAY less than, say, NARS Orgasm. I want to say it's even less than Deep Throat, or at least on par with Deep Throat. The shimmer never makes my pore look huge. In terms of pigmentation, it's pretty much the same across most of the canmake powder blush level, though I believe the Duos and Singles have better pigmentation (generally less shimmer particles), with the Glow Fleurs a little less pigmented/soft, and the Matt Fleurs the worst of the lot (I'll write that in a separate review!) I love Canmake blushes for the fact that they're buildable - these blushes are not the kind that are so pigmented you tap once and then you're already garish looking, particularly as many of those highly pigmented blushes are a b*tch to blend out. These allow you to build up and blend as you go, and of course highlight when you wish to. It makes my life easier in the morning when I don't have to worry so much about over doing it! I love these blushes and probably will continue on collecting new shades whenever I can, the same way I collect the singles, duos, creams, clears, and the balm rouges!!