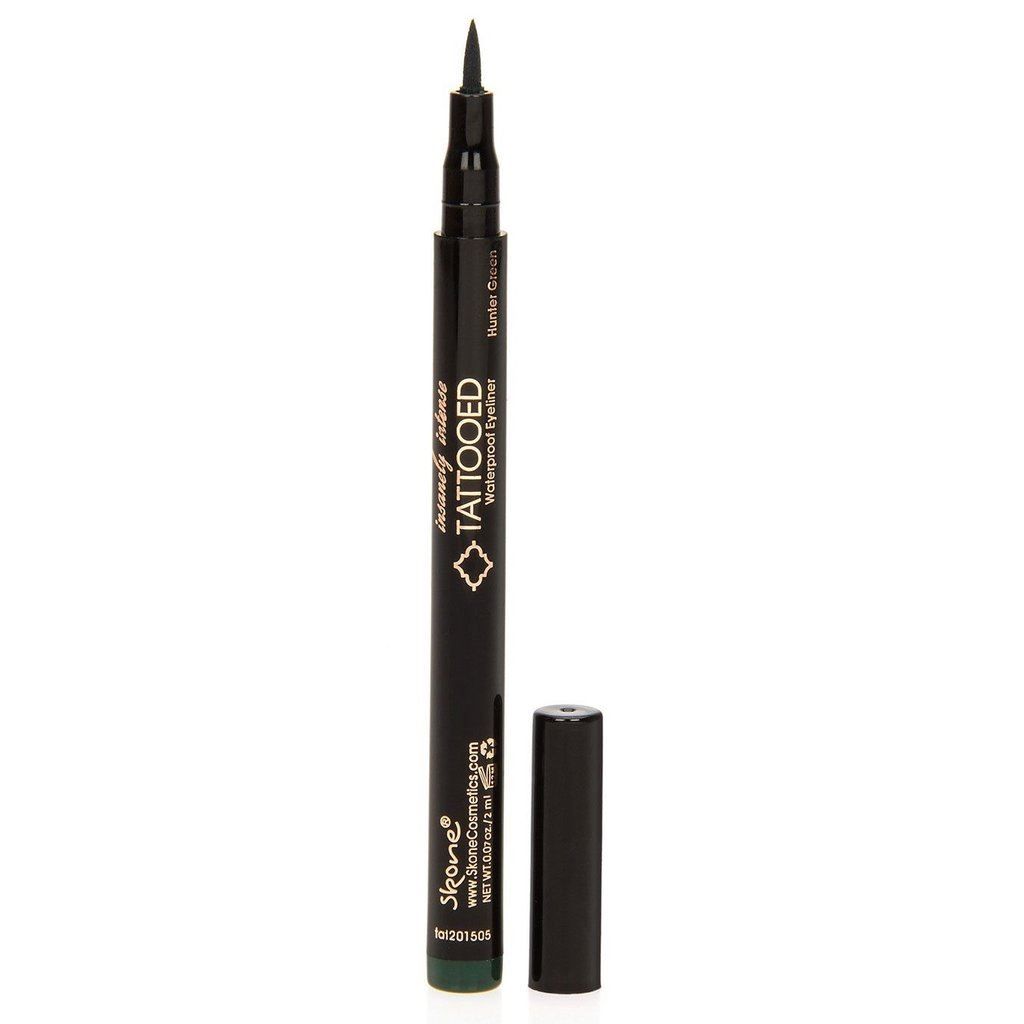 I didnt find this to be waterproof or water resitant. if i had purchased i would have returned but glad it came in my ipsy bag. This for me was a typical felt liner but i found it also smudge or flaked and had shadows under eyes. So not worth it for me...Overall longwear and wateeproof are my main goals.bonus is a brush pen

I received a full size black in my Ipsy bag. After quite a few months, I still reach for this. Doesn't budge on my oilier-than-normal eyelids even sometimes when I use makeup remover! Easy easy to use felt tip that hasn't frayed or dried out. Solid matte thin or thick line--whatever you please! I'm surprised this isn't more popular--it is better than my Kat von D and other felt tip/liquid liners! Maybe because it is not easy to find--skonecosmetics.com seems to be the only online place. Try this one--you won't regret it! Thinking of buying one in brown, just for a less dramatic effect with the same sticking power!

Got this in the June ipsy bag, and it stays on all day long. Love it, will get it again

I also received this in my Ipsy bag for June. I love these types of liquid liners for my upper lid; Stila stay all day is my JAM and from the drugstore I prefer L'oreal Infallible Super Slim. So I was excited to try this, because who doesn't love an extra high-end eyeliner on hand? The first thing I noticed was it had a bit of a sheen to it, even after drying. Interesting. Kind of weird. I wore it for a few days working at home and it was fine; I just didn't care for that sheen. A few days later I wore it out to run errands on a warm day, came home and cooked dinner, and went to touch up my face before I went out again. Hadn't looked in the mirror much that day but when I did, I found that there was a strip of eyeliner missing, mid-stroke. I don't know if it flaked off, peeled off, faded, or apparated itself, but there was a clear-cut sliver of clean skin in the middle of my eyeline that had no liner or shadow on it. I don't know what this means. I took it to mean that the formula might be too waxy for my eyelid, because it had that waxy finish and came off so cleanly in what seems to be one big piece (and it took the eyeshadow underneath with it wherever it went.) The only other time this has happened was when I used a metallic eyeliner from Daiso for Halloween, which peels big time. This wasn't made for oily skin or lids in my view. Looking at the other positive reviews, I do see it performs better on others, but this was such a wacky experience that I had to chime in.

I received a full size in my IPSY bag. This felt tipped eyeliner has a nice point that still hasn't frayed or broken down in the half dozen times I have used it. Very precise and it goes on so smoothly. The color is beautiful. A true black. Perfect for doing that winged eyeliner and the staying power is insane ;-). This eyeliner will NOT budge until you remove it yourself. NOTE: When removing I highly suggest using a makeup remover geared towards waterproof makeup. Seems silly but i made that mistake and the liner stained all around my eye. Looked like someone punched my square between them.

This is hands down the best liquid eyeliner I have ever used. It is a little on the pricey side but it lasts a super long time. The staying power is amazing. I highly recommend this eyeliner!

I got this in an Ipsy bag and I absolutely love it. This may be one of the only pricier things I would ever repurchase. It is matte, which I love and it stays on all day, yet when I wash my face it comes off which is great. I may try some cheaper options like Wet and Wild or ELF but if I find those don't do the trick for me I will probably repurchase this. It is not flimsy and makes a very precise line. I recommend it for anyone who is willing to spend $15 on a single piece of makeup.

I'm murderous on eyeliner and most fall fall short. This one, however, delivered, in spades. I had ordered it from a special offer on Ipsy and received it just before going on my first trip to Europe from the States. So I went to Dublin, Ireland, and I soon found myself enjoying pub culture maybe slightly too much (found that &quot;craic&quot; of which the Irish speak so highly) -- in my defense, Guinness really does taste better in Ireland. Anyway, after a night spent drinking potentially toxic amounts of stout, yell-talking (because I go deaf when inebriated, apparently), dancing (badly) to live Irish folk music and subsequently then vomiting in the street, lying on the sidewalk, riding in a cool yellow Irish ambulance (oh, yes, I did) and sleeping it off in an Irish ER (where the cute Irish doc giggled at me when I finally woke up and was able to tell him who I was), THEN coming home (stopping for more barfing twice along the way) in my bra and denim jacket because I'd ruined my shirt -- THE EYELINER HADNT BUDGED OR SMUDGED OR ANYTHING. And that, my makeup maven friends, is the mark of a good product. I shall buy lots more of this magic stuff.

I received this in my Ipsy bag. OMG it is awesome. The black in a nice opaque color. It glides on easily without any feathering. It stays put all day but easy to remove at night. I would for sure purchase one again.

I got this from my March 2016 Ipsy bag &amp; I love it! It's very black &amp; lasted thru 2 horse lessons at the barn. It's inky black &amp; not dry, perf for making wings. I like this a lot! But I'm not a big eyeliner pen buyer, I don't know if I would purchase -maybe- depending on the price &amp; shipping $$$ this was the highlight of my Ipsy I'm more of a traditional liquid liner fan coz I can't put this in my purse--pens should stand upright tip facing down to keep gravity flowing the ink so I wouldn't feel comfortable keeping it stored on its side. All in all a very nice product but I will update when it dries out! We shall see!!