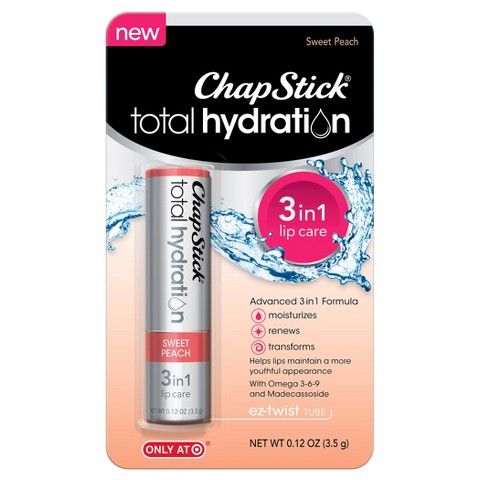 This “hydration” chapstick worked for a little bit but then my lips started feeling very dry and have a weird feel to it, as if they’re numb. I do not recommend this product because it had made my lips feel way worse. I will not be buying this again. If you want your lips feeling great, I recommend normal chapstick you find in a store, much better than this one that takes away your normal lip feel.

I have Soothing Oasis. It's unscented and leaves no tint. I like the texture and it softens my lips as well as soothes it after I remove sunblock from my lips. It also doesn't cause any irritation when I apply it normally.

I have the tinted version in Beyond Bordeaux. As another user said, this really migrates when you put it on. I didn’t expect to have to use a mirror to apply, but if I don’t I can easily end up with color everywhere. It’s a little to “melty.” It also has a slightly grainy texture. That isn’t pleasant in a lip balm. This formulation needs more work.

Felt great, looked awful. I received House Red and it is far too tinted to be a tinted chapstick. You need a mirror to apply this stuff just so the color is not smeared or feathered around your lips. When applying, it leaves a streak around the edges of your lips that looks awful. Plus, the color applies patchy. I would recommend this product, just not in the House Red shade.

Love the Vanilla Cream. The scent is just ok but I apply it before bed and really makes a difference in the lines and smoothness of my lips. I have been using this for over 3 years and hope they don’t discontinue. Iam a avid beauty blogger and have tried lots of high end lip products and this is just as good if not better . This is my 3 rd tube and will be buying more. Want to also try the coconut but not sure if it will be as good as Vanilla cream.

For straight up, non-tinted, non-gloss, stick lip balm, I prefer Chapstick Medicated - softer and not as waxy as original chapstick. But as I couldn't easily find it, I purchased the Total Hydration 3 in 1 in Soothing Oasis. While I generally liked it (fragrance and flavour free, nice click-closed tube), overall I found it to be lacking for a few reasons. 1. It was too soft and mushy. I'd sometimes end up with a glob coming off on a swipe. Need to be really careful about not exposing too much product or it will bend/break easily. 2. Although it seemed like plenty of product, I used the entire tube in a month. I don't think I've used up a tube of any lip balm in a month. I think because it's softer, it gets used up more quickly. Or maybe... 3. The hydration didn't last. I had to reapply more often. I think because it's softer, more emollient, it wears off more quickly. Thus gets used up faster. And... 4. It's not cheap - about 2x cost/ounce as the Chapstick Medicated. I'd be spending a small fortune on this if I used it as my only moisturising balm. So, while not a terrible product, I won't be repurchasing.

This is a PERFECT, EXACT dupe of Fresh's advanced therapy lip balm in terms of formula. The texture is exactly the same, very soft and creamy (kind of like warmed up wax) and smells the same. Packaging is different however with Fresh's stick feeling and looking much more substantial and classy. With Chapstick, you get the Toyota of lip balm holder - perfectly serviceable, very efficient and no issues whatsoever with leakage or caps coming off. With Fresh's luxe container, the metal or whatever it is, it feels nice and substantial and screwing the lid off makes you appreciate the formula even more but of course it's a bit more finicky but you expect that - it's the Range Rover or Lexus of containers for me. So that's my way of saying, I can't repurchase Fresh when it costs close to $30 when this formula is EXACLTY the same for less than $3. However neither formula is particularly long lasting so I'll keep looking.

I have several of the non-tinted versions of this balm in every purse, knitting bag and desk drawer in my house. It's my new favorite lip balm. Very hydrating for me and they feel really great. I was super excited to try the tinted version but alas, it's nowhere near as balmy/creamy and the color I tried (coral blush) was weird and harsh on me. Bummed about that but the non-tinted versions are stellar.

I had high hopes, but no. I thought it would be like regular chapstick only with a little color. I find it very drying and the color is just weird. I got in in Coral Crush. It's not the color that is so bad, but texture of it just looks so bad. I thought I'd get a sheer color. I doesn't last well either, which I guess is good because it looks so bad and feels icky.

I have tried Chapstick Total Hydration in coconut and in honey blossom. I LOVE the coconut one. It has a faint smell of coconut...similar to coconut oil and it moisturizes my dry winter lips well. I do have to reapply is often. The honey blossom moisturizes as well but has a strong honey scent. It's an authentic honey scent and I like honey but I don't want the scent of it directly under my nose all day. I'm going to try the other "flavors" just because I do like the quality and price.