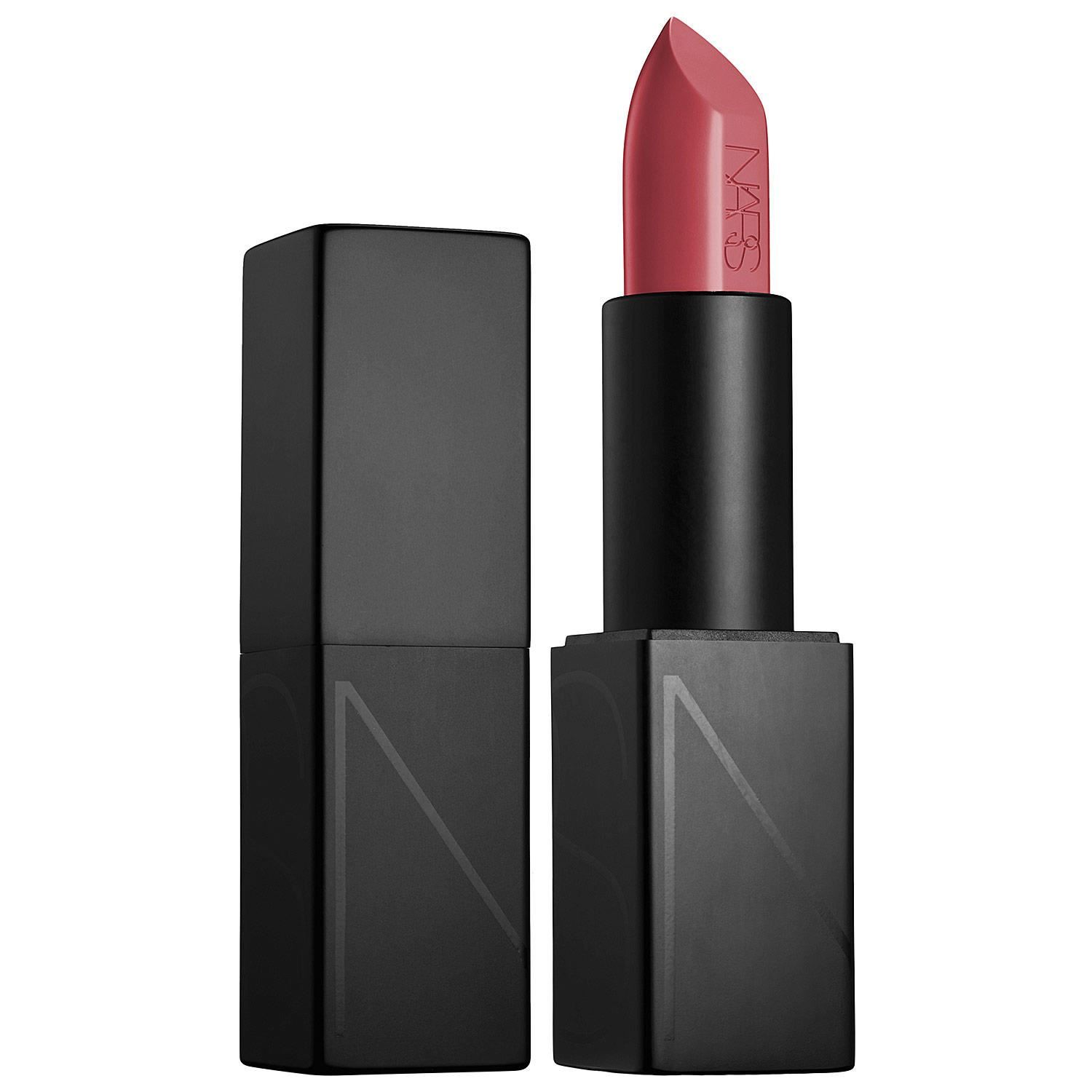 These are amazing...very pigmented, creamy-matte with a satin finish but they don't look or feel drying. In fact I find them mildly hydrating which was an unexpected surprise. No feathering and fantastic color pay off as the pigments are quite intense and long-lasting - more so than many lippies I've purchased over the last year or so. I also love the elegant, chic packaging and the magnetized lid, meaning no worrying whether it's come off in my bag and ruined the rest of my bags' contents. I have these in both Kirat and Silvia which I love equally and will try out some of the other pink/purple variations soon, hopefully when on sale as at $34 each these can start to add up! Not sure yet about the brightening effect of the 'White Mushroom Extract' in these but will possibly take time to kick-in with repeated usage, nevertheless a great bonus as I do suffer from dark pigmentation on my lips and good to know I'm at least doing something about it everytime I use these, however slight that might be. Expensive but worth it. Selena x  ~ My HG list ~  (As I've sampled 100s of skin, hair and m/u products over the last decade and a half, I thought it might be useful to share my top 10 must-have products, subject to change if and when I come across something more effective. I love constantly trying out new stuff - usually sample sizes via e-bay, also plenty courtesy of a friend who works at Sephora)  1. Hair Loss Treatment: ‘Divine Herbal’ - Hair Oil  2. Lip Balm: 'Nuxe' - Reve De Miel Lip Balm  3. Pigmentation + Anti-Ageing Treatment: ‘Divine Herbal’ - Facial Treatment Serum  4. Cleanser: 'Paula's Choice' - Skin Balancing Cleanser  5. Concealer: ‘Mac’ - Studio Finish Concealer  6. Lash Growth Serum: ‘Divine Herbal’ - Divinelash  7. Foundation/SPF: ‘Juice Beauty’ - Stem Cellular Repair (warm glow)  8. Face Scrub: ‘Sisley' - Botanical Gentle Buffing Cream  9. Moisturizer: ‘Lush' - Enzymion  10. Hand Cream: 'Origins' - Make A Difference Rejuvenating Hand Treatment

I don't know how they did it, but somehow these last like mattes while having an insanely creamy texture. They're not cheap but in this case I think the exhorbitant price is worth it. Everything from the formula to the magnetic-click packaging is so well thought out and feels so luxe (or at least as luxe as plastic can feel). The shade I bought, Mona, lasts six hours and is opaque in one swipe but doesn't feel heavy at all, just lightweight and creamy, and it fades gracefully.

Nars Audacious lipsticks are very creamy. They go on in a thick layer and are fully opaque in one swipe. The formula is very velvety, the lipstick doesn't slide around. The issue that I have with these lipsticks is exactly the same as the previous reviewer. They accentuate every line that I have on my lips and look very aging. I'm at the point of my life where I look for the products that make me look better and younger, this is not one of those.

I have the shade in Natalie, and although I love this shade, the formula doesn't seem to work that well for me. If I swipe my lipstick on, the creamy but slightly heavy texture accentuates my fine lines and sinks into my lip cracks. (As a reference I really enjoy the ColourPop matte/matte X lippie stix and the Revlon super lustrous lipsticks in the cream finish) But it works really well if I were to use a light layer using a lip brush, or just dabbing the colour in. Also works really well to layer with other lipsticks to bring some brightness to my lips!

I love love these lipsticks. I have purchased two so far- Raquel (lighter peachy pink nude) and Barbara which is a tad darker than Raquel, still considered a nude but more of a pinky brown. These lipsticks are super pigmented and very creamy. I’ve bought Tom Ford and YSL lipsticks and I personally am really impressed with the Nars Audacious formula. Highly recommend!

I had heard nothing but raves about this range so I blind bought two shades; Anita (pinky MLBB) and Brigitte (medium brightening peachy pink) The colors are great, both very flattering everyday shades for my fair warm toned complexion. The packaging is substantially hefty and I like the magnetic closure but there are others I find more aesthetically pleasing like Chanel, YSL or the most recent Estee Lauder. Since we're talking about an expensive item these details matter. They apply easily with good color payoff and last very well without drying my lips. No detectable scent or taste and albeit being long lasting they can been removed easily without staining the lips. The thing is they transfer and don't melt on the lips, look more like sitting there accentuating any texture issues. There are other formulations I like better like the MAC Amplified which has all the above advantages while looking smoother, feeling lighter and costing less. Still I have used it obsessively because of the flattering color, staying powder and non-drying nature. Not tempted to try bolder colors as transferring would be a serious issue but would repurchase the two I have.

I have two shades, Delphine and Vera. Delphine is a limited edition shade from the Mecca 20 celebration: described as a &quot;terracotta rose&quot;, it looks very reddish on my lips, but not to the point of being red. I think terracotta rose is the best way to describe it, although I can't say it looks any more terracotta than pink, or vice versa. It's actually a very hard colour to describe, and I haven't seen anything quite like it before. Vera is described as a &quot;bright raspberry&quot;. I agree that it is a raspberry shade, but I wouldn't describe it as bright. It's a bold colour but somehow quite muted - I think this would be a nice option for someone wanting to dip their toes into bolder colours but doesn't want to plunge right in straightaway. It's a very nice shade and works well with my skintone (NW10, very pink). The Audacious formula is really great, with a nice slip on the lips without excessive bleeding or smearing. A liner stops feathering if you often struggle with that, as I do. It retains its satin finish even when it has been worn for a few hours, which I appreciate as most lipsticks end up looking matte after awhile. The formula is neither moisturising nor drying, and my lips are left just as they were in the morning when I take my makeup off in the evening. It slips nicely over dry patches without catching or getting chunky, which is nice. The lipsticks are unscented and don't have a chemical smell unless you put your nose right up against the bullet and sniff. I both love and hate the packaging. I like the magnetic closure and the blocky tube. I feel like I'm using a high quality product when I pull it out of my bag, with the added childish fun of being able to snap the lid on and off. It's a small thing, but I like that NARS is cut into the bullet. It's a nice touch. I don't like how the tube shows fingerprints, because it feels like I can never quite get it properly clean. I also wish the colour was shown on the top of the tube, because storing them the right way up in my lipstick holder means that I can't tell at a glance which lipstick is which. It's not a huge issue when I only have two, but if I had multiple then it might become a hassle. Overall I get a nice, luxurious feeling when I wear one of my Audacious lipsticks, and I don't have to put any special work into making sure that it looks good.

Grace. Grace is a gorgeous neon red that I find perfect for the summer or whenever I want to feel positively electric. It's also a sweetly, Betty Draper kind of shade too. This was the first NARS purchase I've ever splurged on - my first foray was the Sephora birthday gift mini pencils which I loved, so I knew I was getting into something good. The packaging is a designer's dream: the sleek-matte feel and look, the magnetic closure, the geometry: I could speak volumes of praise on the packaging alone. But the color of Grace is really unique, which is why I picked it up. Neon red? A vibrant pink-red? This Audacious lipstick is rich in pigment and glides effortlessly when applying. It does transfer, and if you're not too careful, it gets on your teeth -- after all it's not an all-day liquid lipstick. If you enjoy retro-chic and luxe products, I highly recommend.

First of all, each one of these are truly UNIQUE and COMPLEX colours such that they are not dupable. When they say it's pigmented, they really mean it. Packaging feels very luxurious and sleek. It doesn't just have the click sound that luxurious lipsticks have, but also has a magnetic type closure. I have three colours - anita, anna and apoline. All three are absolutely gorgeous, statement making and wearable to school, office and parties.