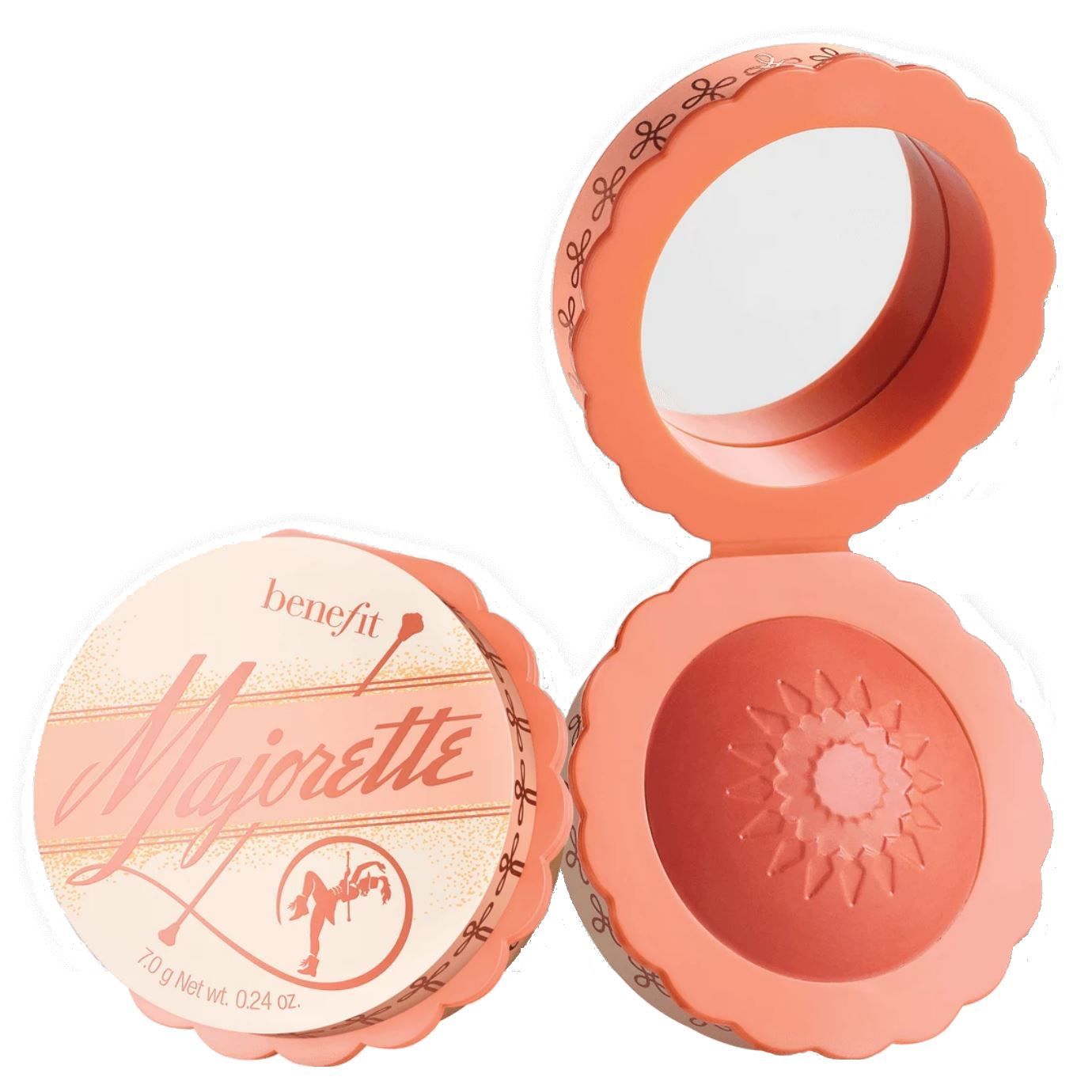 I was desperate for a peachy blusher but there are surprisingly few on the market. Opted for this - foolishly seduced by the gorgeous tin and dreams of how charming it would look in my make up box. Sadly it's just that - pretty packaging. The product provides an insant pop of cheery colour, a lot more subtle and flattering than the burnt magenta in its product pictures. But it fades almost instantly. It's got a little more longevity when layered with powdered highlighter on top and cheek stain underneath. But considering it's sold as an instant fix this is too much additional work for my liking

I usually don't like cream blushes but this one is great! The colour looks really intense but it comes out very natural and subtle.

The color looks a bit scary at first but applied it is very subtle and natural plus the package is very nice and girly. I use it alone for a natural look and under any blush to amplify the color. The only bad thing is that it is pricey but it worths it.

I love the look of the packaging and the smell is lovely. The color is perfect on me. My sister got it for me for Christmas so I can't comment on price. So far I'm happy with it.

I got this blush for only $10, but it usually retails for $28. That is kind of pricey for a blush. The packaging is so cute and bubbly. It lightens up my vanity! It is sort of like a compact in the way it opens up. The shade is a lovely coral. It looks very bright and obnoxious in the packaging, but it isn't as intense as it seems. It is a creamy blush, so that transparent plastic around it might be important to keep. I noticed how lovely the color is on my cheeks. One or two swipes of it on my tan skin does the trick. Though it is a lovely color, I have issues with blending it out. I sometimes resort to using my hands to help blend it out. If not, it can go on patchy. I do not use this blush by itself though. I have this Too Faced blush in Candy Glow, which works very well with the Majorette blush. I don't think I would use the Majorette blush by itself because it serves well as a base for those blushes that are more frosty than matte. All in all, great product with a pleasant look and scent. I would repurchase.

I don't wear blush very often, so I was skeptical of buying this at first, but I am so glad I did! The texture is soft and creamy and it goes on perfectly! It smells absolutely amazing and it gives your face a brighter tone. I loooovvvee the packaging and think it's so cute! I ussually don't like a lot of makeup products and I've never tried benefit before but I definately will be buying this again!

When this blush first came out, I wasn't going to buy it. I have several creme blushes and figured it was just like all the rest. Then the YouTube hype began and I resisted. It was when EmilyNoel83 on YouTube dubbed it her best high end blush of 2014 that I decided I had to have it. I buy very little high end/non drugstore beauty products, so it was a big deal for me to purchase this but I bought it directly from Benefit when they were having a sale or free shipping. Benefit is a Wisconsin-based company located not far from where I reside--I love supporting local businesses--and I get my product orders in one day! How do I love Majorette? Let me count the ways. The darling packaging... but one lippie was taken off for the way you have to remove and replace the plastic cover to the blush. I'm always afraid I'm going to smash it with the cover. I want to use and cherish every single ounce. If the cover gets lost or broken, the product could dry up faster than normal. The shade is lovely. It would work well on very light to medium-dark skin tones in my opinion. In fact, on honey colored skin or a tan, this would give the most beautiful glow versus a super pigmented looking blush. On my pale, sallow skin, it adds life and a subtle blush that is natural and very flattering. There's a slight fruity-floral scent to this when you have it in hand but it dissipates quickly. The consistency of the product is creme to powder so you need to blend rather quickly, especially if your skin is dry. I've applied this with a stippling brush and with my fingers; I've found that it works best with my fingers. The heat from my fingers helps to blend it perfectly and I can feel it turning into powder as I lightly tap/blend with two fingers. I don't find that this disrupts my foundation or other products on my face upon application, in fact I apply it after I've applied foundation and whatever powder I'm going to wear. It adds just the right amount of color and, on me, I don't feel I need or want to put other blush on top of it. I don't put powder over it because I like the slightly dewy look it gives me. The shade on me comes out to be close to apricot with a slight pinkish glow like I've just been pinched. It looks great with a neutral contour accenting the cheekbones but I prefer it alone with a pop of gold-toned highlighter on the tops of my cheeks and near my brow bone. The product itself doesn't have any shimmer that I can detect but it makes me look lit from within somehow. I've also worn this without foundation for a healthy, just-in-from-the-cold look. I've found this formula to have a perfecting value to it in that it does not magnify my pores--it actually makes my cheeks look flawless and I don't have perfect skin. I will buy this when it runs out but it looks like it's going to last quite a while. Chances are, I'll purchase a new one before the year is out when I can get a sale price. I know I'll use this product up while my other creme blushes sit and age. My other Benefit gem is their Dandelion box blush which I adore using in the dead of winter but that's for another review.

I was so excited to try this product because I thought the packaging was so adorable. The color looks amazing in the pan, and I think it would look good on almost any skin tone. I have very tan olive skin, and this color complimented it very well. It applies as a subtle, warm color and dries into a powder finish, which I thought was pretty neat - I expected it to be sticky. My only gripe was that when I asked my boyfriend what he thought, he said, &quot;It looks great!&quot; I asked him to clarify what he thought he was looking at because I didn't exactly tell him I put blush on. I said, &quot;Did you know that I put on the blush?&quot; Just so he could focus on that aspect. He responded, &quot;Yes.&quot; At first I was like, &quot;Oh okay, he thinks it looks good.&quot; And then, &quot;Wait a second, you think it looks like I just put blush on??&quot; He started saying some things about how it looked good (he probably meant the color), but that he could see a line where the blush was applied in some parts. He said it looked a bit patchy. I said I was going for the natural look, and he affirmed it didn't look like that at all - just product sitting on top of skin. So, even though I thought I did a pretty good job of blending it out with my fingers, I blended it further, and then I asked him what he thought again. &quot;It still doesn't look right.&quot; I blended it more. &quot;Now that looks good!&quot; I looked in the mirror in vain and tried to figure out if the blush was just really subtle at that point, or just not there anymore. &quot;It probably just looks better because it doesn't even look like I have it on anymore!&quot; I surmised, so I just left it at that and moved on. Too bad, because the packaging and the color of the product are spot on... as is the blush (Get it? Spotty? Ha ha...)

I too love the packaging and the smell. I wish I had read about keeping the plastic protector thingie here first before I threw that away. Oh well...this cream blush is gorgeous over my BB cremes and doesn't sink into my fine lines at all. The color is perfect with my red/strawberry hair. I felt pain when I bought it at Sephora, it's true. But the pain goes away after a while and the product lasts a long time.

This is a super cute, orange peach blush that flatters a lot of skin tones. It's very wearable despite appearing super orange.