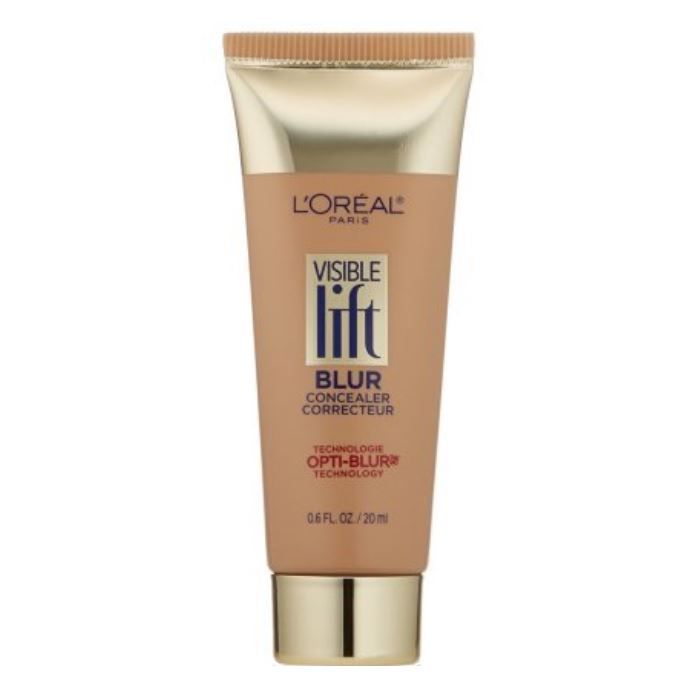 pros: covers nicely expensive for drugstore but there is so much product can be used everywhere cons: packaging is a mess shades if your pale and yellow don't go for this. no pale no deeper shades

This is a damn good concealer, and I alternate between this one and my Makeup For Ever HD. I do think the packaging is a mistake – it would have benefited being in a long tube with an applicator as opposed to a squeeze bottle that resembles foundation. But that’s my only complaint considering a little goes a long way in terms of product. The formula is slightly thick and moisturizing, which some may not love but I have dry undereyes since turning 30 so I prefer this type of concealer. When patted in with a damp sponge and set with any powder, my undereye remains flawless yet natural looking.

Honey, if you think this is cakey and unnatural you should try the Hard Candy Glamouflage concealer! It's so thick and pale it looks like sandpaper under the eyes. Anywayyyyy, this L'Oreal Visible Lift Blur concealer is AMAZING. I am 25 years old, and I have been looking for a thin consistency concealer that also has incredible coverage for my veiny gross looking grey under eyes. And it's JUST that! You can easily blend it using your finger for maximum coverage or blend it with a sponge for medium coverage. It is SO easy and fast to blend too. I'm currently using the Fair shade, and it doesn't sting when applied, I set it with powder and so far it hasn't creased or oxidized. I will update this review in case something changes. EDIT: I applied this at 5:30 am, it is now 9:53 pm and it looks just like it did in the morning. All I did was set it with powder. Great coverage but lightweight, doesn't oxidize, doesn't look patchy, doesn't crease, doesn't hurt my undereyes AND it works great as an eyeshadow base... Well, I think I finally found my holy grail concealer.

This concealer isn't bad for a drugstore concealer. I use only under my eyes and it covers circles pretty well and doesn't crease as much as some other concealers. It looks good throughout the day and stays on when set with powder. Overall one of my favorite drugstore products.

I bought this concealer based on Xteeener's recommendation and looking for a new under eye concealer. For reference, I'm about NC 30 and bought the light shade (I think). It does brighten up the under eye area except it does crease. Even with setting powder, I still noted some creasing under the eyes. I do have combo oily skin so that could also be a culprit. I find that it is a bit thick for my liking. I use my fingers to dot and blend around the area. The product is OK for me, it's not bad, but I'd prefer something a bit better. Although the packaging is hygienic in a tube, the only problem is that when traveling, because of the plane pressure, it does end up coming out. It's a bit hard to gauge how much to squirt out. And if you squirt too much out, you end up wasting the product. I don't note any smell or fragrance to the concealer. I have not had any milia or breakouts from the concealer either. I would not repurchase this as I would like to experiment other concealers on the market. For a drugstore concealer, it is not bad. I would also use this concealer as a highlighter and conceal around darkened areas on my face such as around my nose. If you have dry skin, this concealer can look cakey and thick if too much is applied. The pigmentation is good and lasts throughout the day. However, I end up wiping it all off not because of the concealer, but because my mascara smudges under my eyes that I end up wiping the majority of it off. I would repurchase if there weren't other options to try but in this case, no :D

Sigh. I recently had to repurchase Nars Creamy Radiant after I gave up on drugstore concealers. My favorite formula of all time is actually Maybelline Fit Me...but their lightest shade was way too dark. :( I gave this concealer a chance because it looked promising based off the ingredient list. For reference, I only use concealer on my undereye area as the rest of my face requires a matte foundation. My biggest problems with most concealer formulas is they're either too drying (settle in creases, emphasize skin texture issues) OR they're way too dark. The finish of this concealer is BEAUTIFUL. It is dewey and skinlike. It doesn't settle into creases. I actually looked younger wearing this. The coverage is wonderful. It's a dream to blend because despite being a mouse/cream formula, it's very emollient. I love it. But...I do not love the shade selection. :( The lightest shade Fair is about 2-3 shades too dark for my NC10/very pale skin. It's even darker than Fit Me's lightest color. This is such a shame because if it weren't for the orangey shade selection, I'd give this &quot;holy grail&quot; status in a heartbeat. I took away 2 lippies for this con alone. If it was paler, I'd rate it 5. I guess I'll be sticking with Nars even if it's not my favorite. At least Chantilly is a perfect shade match.

I have slightly dry under eyes with moderate dark circles. I always color correct and apply a concealer on top. This is one of my favorite drug store concealers. I paid around $11 for it which is a bit more than other concealers but you get a good bit of product. It's worth it! Pros: Medium to full coverage Nice creamy consistency so no dry/cracked/cakey look after I set it Easy to blend and build coverage Pigmented, not a lot of product is needed Minimal creasing Longwearing Doesn't age me 5 years like other concealers sometimes do(looking at you NXY HD concealer-_-)!!! Cons: Small shade selection Squeezey tube is not my favorite packaging as too much product can come out Overall this a great concealer! I'll definitely repurchase.

This is an excellent, high quality concealer which I use for my under eyes only. I had previously been using Dior's Skin Perfecting concealer, and when my last tube ran out, I decided I no longer wanted to pay so much money for a small tube of concealer. I've been using the Visible Lift Blur for several months now, and really enjoy the coverage that this product provides. I have noticeable dark circles and very fair skin, and this product covers them fairly well, has a nice creamy texture, and blends easily. It does not crease at all and looks just as good at the end of the day as it does when I apply it in the AM. The tube is also a generous size and the packaging is very elegant with the gold cap. Highly recommended.

L'Oreal already got my money on this twice, since I bought two shades, maybe a year ago, thinking I'd like the miracle blur and all. In the last year, though, it's been mostly neglected. I bought the Light shade first (the middle shade), and since I'd bought it in winter I found it was too dark for me, and then picked up the Fair, thinking it'd be a better match. It was, sort of. I'm kind of a light neutral skin tone, where in the world of foundations, usually the second or third option (going light to dark) works well for me. So blending the two shades gets a decent match for me, but it still doesn't work. I've tried a number of ways to work with this concealer, and I haven't really struck gold. As a concealer it does cover some darker spots, but if I have some unevenness in texture, especially if my skin is on the dry side, it just accentuates the trouble spot and does nothing to conceal. Under my eyes, I had hopes for the darker shade, and it was a good match for undereye circles, blending and blurring a bit and blocking out some dark circle. I thought, yes, this is working, my undereye circles are diminished -- and 15 minutes later, it looked patchy and my undereye lines were amplified. The best use I've found, personally, is to mix it with moisturizer and make a tinted moisturizer out of it. It gets the most natural look there, and I think with this formula I need added moisturizer to make it work. But that said, I have other, cheaper, and better-matching tinted moisturizers and BB creams that perform better for me. Though when mixed with a moisturizer and applied to my face, it does make the clear, line-free areas of my face look better. But that's not what I wanted it for, since the formula (being concealer) is heavier, and I don't want that on my cheeks and forehead. One last thing I don't care for is the tube. I wish it had a narrower opening because I've found it quite easy to squirt out too much of this product. A shame. I wanted to really like this and enjoy a bit of airbrushing magic, but it just didn't work for me.

My favorite concealer! I wear this in the color Fair. It really does help blur fine lines. It's soft, blends well, and wears well. I pair this with Loreal's matching Blur Foundation and my skin looks so nice! :)