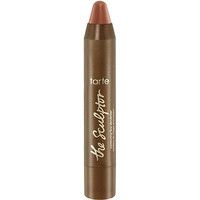 I love contouring my face a lot and find it challenging to use cream contouring palettes as I can't control the amount of product on the brush easily so I was looking for a stick to try out. I got the wet and wild but I didn't like it as it was too waxy and felt bad on the skin. I felt my pores are not breathing. I saw this one online on tarte website on sale for $13 I thought I should give it a try. First my order was received missing and opened or damaged on transit as it was shipped from the USA to Canada but when I contacted Tarte they replaced the missing items really quick and I received them within three business days. The amount you are getting is very little. Not the full size you see on this pen maybe just a third, but it is so easy to apply it on the face by just drawing the lines and blending them. It blends really fast and beautifully. I got shade 2 and am happy with it. I have warm undertones and my skin tone is light to medium... it works just perfectly for me. I wish they had the same in the lighter highlighting color but I didn't see it. I use it with my concealer. and it is OK, I wouldn't wear it for a long time as I am not a person who likes something on her face for more than 5 hours. I like to wash my face and hydrate it often... to feel refreshed. I do recommend this product. I used it with Maybelline FitMe liquid matte foundation and with Estee Lauder's Double wear and it worked well with both. Here I am linking one of my videos when I used it. I hope you find my review helpful. If so, please hit the helpful button. Thanks so much for reading. xoxoxo <object onclick="ga('send', {hitType: 'event',eventCategory: 'Ajax Interaction',eventAction: 'PlayVideo',eventLabel: ''});" width="360" height="320"><param name="movie" value="https://www.youtube.com/v/tY4Qz47r_4I"><param name="wmode" value="transparent"><embed src="https://www.youtube.com/v/tY4Qz47r_4I" type="application/x-shockwave-flash" wmode="transparent" width="360" height="320"></object>

I got this as part of my gift and I didn't love it. The product itself was nice and easy to use but it literally FELL OUT one day. I was so confused because I had used it for about 2 weeks and was annoyed. You don't get a lot of product with it either and it does run out very quickly since it's creamy. But, the plus side is, it did blend really nicely and was easy to use. I definitely would not be purchasing this in the future.

Expensive and doesn't work well. The colour doesn't match my skin tone (I am reasonably fair), is hard to blend, and doesn't look good. Would not recommend.

I have three of these from various sephora favorites boxes, and i dont use them. Mine are all in the color Park Ave Princess. The color is ridiculously orange. Seriously, its so orange my boyfrienx told me i looked ridiculous and when he comments or even notices my makeup, something is seriously wrong. Like most men, he will only comment on it if it looks absurd, and this stuff does. No matter what skin color you are contours are not supposed to be orange. Contours are meant to mimic shadows (i.e your cheekbones are so sharp and defined they cast a slight shadow, thats what a contour is supposed to look like ) , and shadows are not orange, not even on women of color. The formula itself is also terrible. It migrates all over the face and fades and smudgez at the same time. No bueno. I was told to go to the bathroom and work it out because my face looked pumpkin orange. This supposedly comes in other colors, but at the time i got these, it didnt. Even if it does come in other shades, its a bad formula. The only upside is that its portable compared. to those ridiculous 5 color contour kits (which are also stupid unless you are a makeup artist because there is only one contour color that is. correct for your skin, so the other 4 are a waste.) Its also nowhere near as expensive as my current contour, the gigantic Marc Jacobs contour compact (it has one contour color and a highlight but has a Huge amount of product.) But if you want one contour color, and something protable and cheaper than the large Kat Von D, Anastasia, or Smashbox palletes, i would just head to the drugstore. Nyx and loreal, and probably many others, make contours cheaper and way better than this one

I got this in the double ended packaging, contour on one side and highlight on other side. Love this for travel. Super easy and just seconds to apply. The colors blend well with my NC30 light olive complexion. Blends easily for a quick subtle contour. I just use a small line of contour under my cheekbones and a small line of the highlight on the top of my cheek bones and inner corners of eyes. Blend and go. Great travel idea.

I got this in Sephora's 2016 Bronze Bares All set 8 things in the set for $39 and I already bent the tip coz of it being soft so packaging is a 1. If it was like the Clinique chubby contour stick w a tip that is more blunt &amp; retracts all the way into the pencil would be better! Perf for confounding my nose but I've got this extra glob that broke off I'm going to have to transfer into a little container &amp; use a brush with or my fingers I suppose becoz I don't want to waste it. The pointy tip was not a good idea. It's gr8 for nose contour! Just hate wasting product.

i'll put it out here first, this is my first time trying out crayon / cream based based contour products. my review is based on my first few impressions. i don't have a definitive conclusion yet. background info: oily combo skin type, slightly sensitive, blemish / acne prone skin user. prefers full faced makeup, living in sub tropical conditions, hot and humid mostly, temperatures ranging on 91.4°F on an average day. i have always been using powders for my contouring, currently using Stila stay all day bronzer powder (my HG atm). i bought this in a deluxe travel sized kit at the checkout counter. it came with the sculpting stick in #2, the highlight stick and their contour brush. my foundation shade is currently NC35 in mac pro longwear. pros: + colour match is quite ok + easy to draw + formula is not drying + quite ok to blend, if i had to rate blendability it would be a 5.5-6/10 cons: - does not last - needs to set with powder - even if it came in a travel sized packaging, it was expensive (i paid $39) - highlight stick that came together did not reflect on my skin the stick isn't extremely bad, but it wasn't anything revolutionary either. i was able to blend the contour, but after a few minutes i had a bit of dry patches seen at the contour area, it wasn't cute. i have all along been using powder based contours and none of them had given my dry patches so i was quite surprised. even though i understand this is the contour stick i would also review a bit of the highlighting stick it came together with it. do not purchase that. the highlight did not reflect anything on my NC35 skin. even my hourglass ambient lighting palette could do the trick but not this product. i did not like it and i think for the highlight stick its a complete waste of money. after drawing the contours with this stick i realized i had to set it with powder, so i used the stila stay all day bronzer to set the cream contour. i did not put a massive amount of powder, just slightly because i wanted to see how long this cream contour would really last. unfortunately within 4-5 hours the cream contour wasn't as visible when i first applied it. even with my own stila bronzer alone, my contour could still be seen after wearing it for about 10-12 hours. i work long hours so i wanted something to really last. overall i was very disappointed with this product. i would try to use up, however i would not recommend to oily - oily combo skin types. maybe normal - dry skin people could try it out as the blendability was still ok overall. but i would not repurchase, and i will still stick to powder contours / bronzers as they perform a lot more better. hope this helps!

I'm shocked! I love it! I have a medium skin tone and use the #1 (I have a trial size so don't know the color (!) in the hollows of my cheeks. I run a thick line from top of the ear to mid cheek then blend upward with my finger. Pat my cream blush above and...beautiful! Looks natural and lasts all day with a touch of setting powder. I'll def buy the full size.

PROS: 1. Very creamy and blendable. 2. I like Tarte's Park Avenue Princess (in powder form) but I find this cream stick to be very user friendly especially for beginners. 3. If you're light-skinned, this can be used as a contour rather than a bronzer. 4. It's travel friendly and takes so little space in your makeup pouch. 5. It twists up so no need for sharpeners! CONS: 1. Expensive 2. Tends to fade after more than 4 hours. Blotting powders work to lengthen the wear. I love Too Faced bronzers and I collect those yummy bronzers even if I already have the bronzer wardrobe. However, I am quite impressed by this bronzing stick. This is totally worth trying!

This is one of the best bronzers for dry skin, especially if you are very fair--Nw15. I use this in Park Avenue Princess. I just draw a thick line just above the bottom of my cheekbones from my ear to about the centre of my eye. I blend it up (not down which could be ageing) with an Elf small stippling brush. I set it with transculent powder (Laura Mercier) with a light hand, which is a must for staying power with cream products. I get warmth without orange or muddy tones. It's fast, doesn't emphasize dry skin and best of all it's so compact. So great for travel when even the smallest compacts add up in my makeup bag. Be warned, the stick is quite small, but I've had no trouble with breakage--I use very little pressure and I don't keep this in the bathroom where such a soft product might be affected by changes in heat and humidity. I'm stocking up on this in case they discontinue this after the contour fashion subsides.