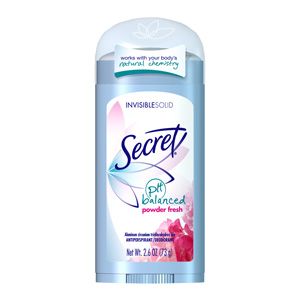 Secret makes so many varieties and scent of antiperspirants but this one is they less expensive one with a lower % of Aluminum and thus a bit less sweat protection than the "Clinical" line. For an everyday moderate sweat person it's fine. My 15 year old uses this and I alternate between Secret and Dove products.

You know how sometimes you think you have something that works well, until you get something way better and realize the first thing sort of sucked? That's what happened to me with this. I had been using Dove deodorant for years and thought it worked fine. I would sometimes get some sweatiness going with it on, and I would (fairly often, really) find that it wasn't great for scent control after a few hours or in sleeveless tops - sometimes it made me feel like I smelled like dirt, literally, if I got sweaty - but I figured, I live somewhere super hot, no deodorant can really do that much. I was wrong. The Secret is SO much better. Way less issues with sweating onto t-shirt pits, and has eliminated odor problems entirely. Lasts for hours and hours without needing reapplication. I have it in shower fresh scent but it barely has any scent to it at all, which I think is a good thing. Doesn't irritate skin, even when applying within a few minutes of shaving. I am a little more careful about throwing on a black tank top with this as I was with the Dove because that one was truly invisible but I haven't had any terrible marking issues with this so far. Overall, highly, highly recommend!

Overall, I think this is a great deodorant. My job is very physical and I'm constantly moving and even after an eight hour shift, this deodorant is still going strong. I would, however, like to mention that I am not someone who has ever had difficulty with sweating so it may not be for everyone.