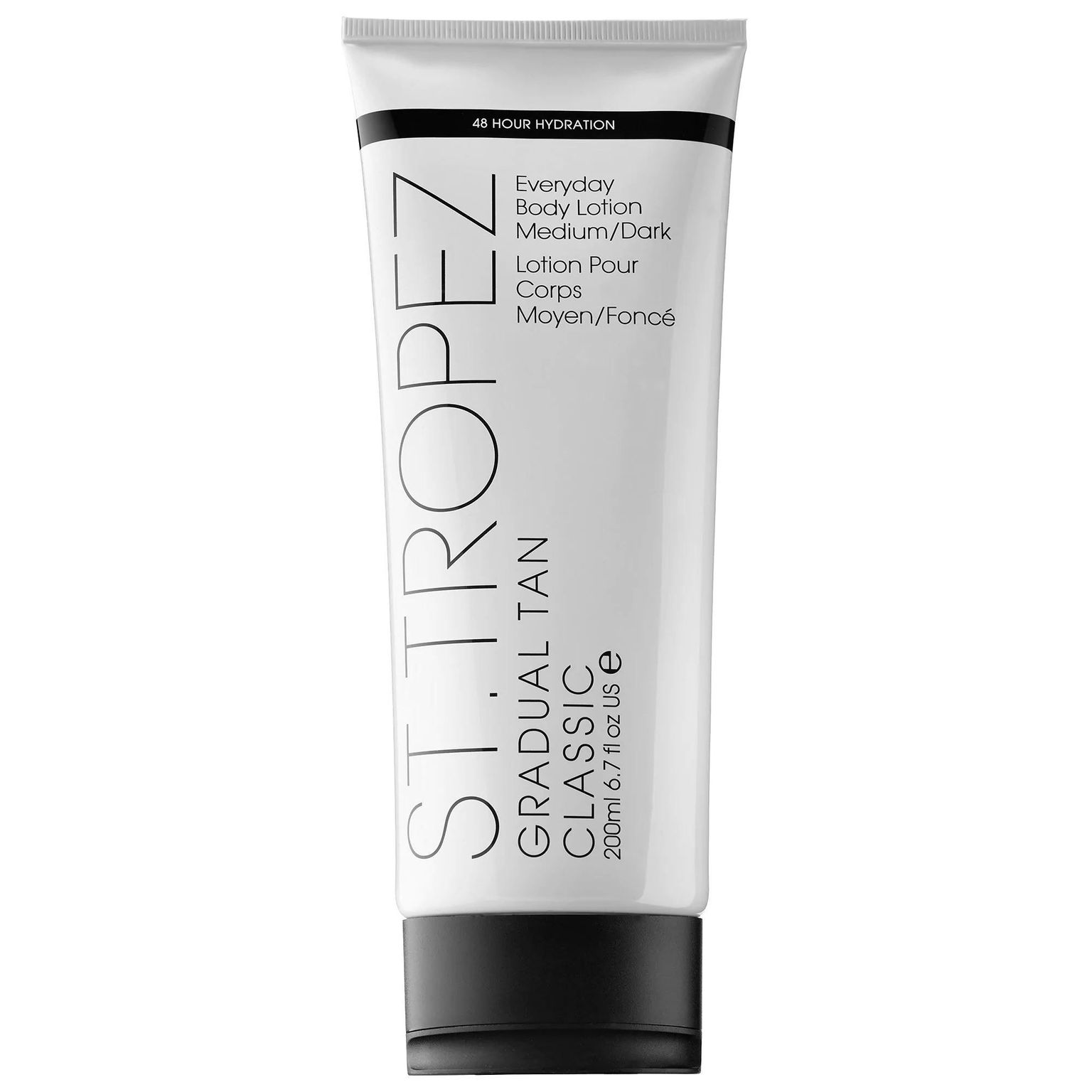 I found a tube of this when I had run out of my Decleor gradual tan. Decided I would try it again this Summer. It is a bit of a 'long haul' as the consistency is thick and gloopy and it stains my clothes ( wear something you can chuck in the wash afterwards...) But...my husband actually complimented the colour - I am fair skinned and use the medium-dark. It has pink in it, as a natural tan has for fair skin and so, I have now been converted. I was applying too much initially and now, just apply a light 'coat' of it and the plus (huge) is that the 'tan' stays for at least 4 days so its not an everyday thing as it was with Decleor. It fades very very evenly - I wouldn't use it on my face but it really is a very good tanning product and hasn't got a ghastly 'biscuit' scent. A friend commented that she liked my perfume and this was just after I had applied the cream. It would be great to have this in a lighter milk formulation but, its the one I will be using this Summer. Pros: Color very good, lasts well, scent is not yukky, price is good. Does NOT streak! Cons: Formulation is 'gloopy', stains clothes despite the bumph on the tube, sticky after application.

Pros: I like the scent, subtle, light, and floral. Once it's dry it does not leave your skin feeling greasy like some tanners do. Cons: The lotion is very thick so it is hard to spread over skin unless skin is damp. I purchased the medium/dark but I'm not very impressed with the results. It gives me more of a light/medium color. I'll probably look for something else once this runs out.

this is a good tanning lotion! i am pale with cool undertones, and i got the medium dark one as my friend recommended. after 2 applications i noticed the results. its not orange, although i wouldn't say it looks the SAME as a natural tan, but overall a nice subtle, sun kissed color. i use it at night after showering, exfoliating and shaving. i use the mit to apply (which i find wastes some product but id rather that than have orange hands).. be careful on the feet! either put lotion on in between your toes and on ur ankles beforehand or just skip the feet altogether lmao i put it on my feet and they looked patchy the next day. as for the smell, its floral at first but then u get that same ol tanning lotion smell which isn't terrible but not awesome either. I've used jergens and nivea in the past and this is a much better product. pros: good color, not orange gradual, so you can really stop when u like the color and use it every 2/3 days after that fades evenly pretty forgiving (didn't get any streaks except around my wrists and feet but that was probably my bad application techniques ) dries quickly cons: expensive for the amount of product (i applied 5x and that used up more than half the tube) smell (not terrible but not great either) very subtle color (not really a con, but it rly is subtle so opt for something else if u want a darker tan) overall a good product. i will try the mousse next, as I've heard its even better and gives a darker color. but definitely give this a try if u want a nice glow :)

Word to the wise: This IS NOT a &quot;gradual&quot; tanner despite being labeled as such! If you're looking for subtle or foolproof, this is not for you. I actually have the Light/Medium shade, not the Medium/Dark (MUA has no exact match for that shade for me to review here.) I have experience with the regular St Tropez sunless tanners, and I love the mousse. However, I wanted to build a lighter, more gradual tan due to it still being winter...and so I gave this formula a go, thinking it would *at least* be decent. I've used many other gradual tans with no problem. After following all the normal steps - exfoliate, shave, moisturize dry areas, apply, wash hands after application, let dry forever - my tan turned out awful. One application and I am actually darker than if I used the regular dark tanning mousse! Oh, and I'm orange, too! Even worse - it's streaky and uneven, which should be virtually impossible with a &quot;gradual&quot; product. Yes, I let this stuff dry for 20 minutes, aided by blowdrying on the cool setting, before putting on baggy pajamas...and I was still damp/sticky for hours after. I have random dark brown streaks where too much color developed, even on my elbows, which were pre-moisturized. I did my whole back by myself, and it literally turned out better than my forearms...like, HOW? My palms are stained a dark orange-brown despite washing them twice before the lotion dried on them. I have been scrubbing my streaky spots all day and nothing is lifting them or the stains on my palms. Also, after one quick, warm-ish shower 24 hours later, I am now patchy all over from the GOOD parts of my tan coming off already. I am now trying to even things out with the tinted Instant Glow version, which is also meant to be gradual. The wash-off bronzer in it seems to have more of a green base, so I have hope for the developed color being olive, too! If all else fails, I may actually buy the tan remover. I'll probably try the St Tropez in-shower lotion next, which is reportedly foolproof and extremely gradual...but still has a bronzey color, rather than that yellow tinge other gradual tanners often have. The mousse/mitt method is still my summer go-to, though!

I'm right in the middle with this so I'll do a short pros and cons: PROS: Good colour Doesn't transfer CONS: Smell. You can smell this on yourself all day Doesn't sink in. Especially if it's hot, you can feel a greasy film on your skin. I won't buy this again as the lingering smell is a huge factor for me.

Seems to work so far! I just received my order from eBay and got the larger size bottle 6.7 oz, the only drawback or complaint would be the overpowering perfume smell! Agh! Its strong! Having said that it really does look natural, not orange or yellow, just a nice sun kissed glow and this was after only one use! I'm liking that! I only use tanners on my legs, so keep that in mind with this review.. Will post another update after I apply a second time, it looks like it could become quite dark if I continue, and that is not the look that is desirable for me... But so far so good! I'm glad I made this purchase! Perfect for summer and avoiding sun rays!

Overall, this was meh for me. I snagged a travel size from my Sephora points and tried using this on my face. It feels nice going on and smells very floral, and leaves a very nice golden brown color. However, I am naturally palest of the pale and I typically despise gradual formulas because they do little to nothing on my skin. I think this would be good for those looking for a very subtle, light color. But for someone like me who much prefers St. Tropez's bronzing mousse, this was a small pass for me.

I'm so glad that I decided to try this gradual tan! I am the palest of the pale, literally ghostly! This tan is very natural, builable and lasts! It fades out nicely, it doesn't develope or fade out patchy at all which is a breakthrough for me as tan doesn't tend to work well with me! It doesn't smell awful either which is a huge plus! I love that it doesn't stain sheets, clothes or towel as there is no guide colour. It's also very moisturising and leaves your skin feeling beautifully soft! I like to apply this with a mit! TIP: mix with your face moisturiser, that works an absolute treat! I have cystic acne so tan on my face FREAKS the living daylights out of me but when I mix with moisturiser it doesn't aggravate my skin whatsoever.. HALLELUJAH!! The only downside is that it doesn't dry very quickly so having to prance about wearing next to nothing is a must however I can live with this! Would recommend to a friend 100%! Enjoy beautifully, naturally bronzed skin ladies!

Being a little lazy and reviewing 3 self-tanners at once (I only do my legs and always prepare by exfoliating and moisturizing many hours in advance and apply tanner at night a couple of hours before bed). I've used the 3 below at least 4 times each: Fake Bake Flawless Self Tan Liquid - No Best applied with Mitt Pros: Dries quickly, best smell of all Cons: Streaky, patchy, messy.Color guide is too dark.Color doesn't matter if it's not even! Only lasts 2 days or so. Even though it dries quickly still can get weird areas (bend behind knees or ankles) before next morning rinse. St. Tropez Bronzing Mousse - Yes Best applied with Mitt Pros: Even, nice color, Dries ok. Lasts a good 4 days before fading evenly. Cons: Doesn't smell that great but goes away after rinsing with water in morning. St. Tropez Everyday Gradual Tan Body Lotion - Yes Pros: Even, nice color, can apply with just disposable gloves and not mitt. Lasts a couple of days and reapplication doesn't make it too dark or streaky. Smells alright. Cons: With use about every 3 days, can get a little yellow-y but not bad. Slower drying but no color guide so staining not as much of an issue.

Love this everyday tanner in light, I apply every day for a couple of days and it leaves my fair skin looking a natural golden tan, never any streaking, builds up nicely, one you have your desired co,our just use every few days to maintain. Regular exfoliation and lots of moisturiser ensure you maintain a great tan. This is a beauty staple to never be without. However I did try this on my face and it broke me out, great for a body tan though.

Most Viewed Self Tanners Products