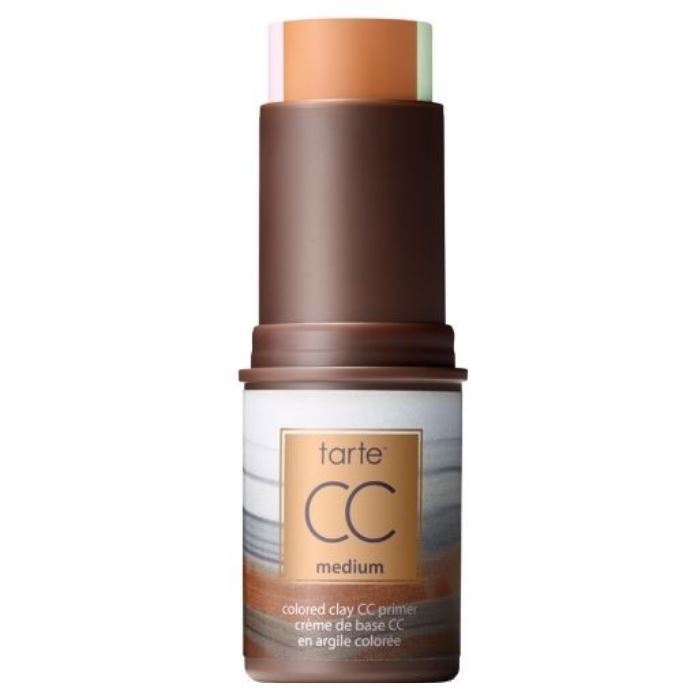 This is a cool but confusing product. It is a stick like foundation. It leaves a velvety powdery feel on your face which is pleasant. However you have to practice putting it on and make sure you blend it well. I use it in place of foundation , since it is really hot here, this product feels nice on the face It has no sunscreen in it so you need to put that on. Really good for travel also, being it is solid. Ok, I have to edit this review. All the things I wrote are valid, but I really cannot say that this product is necessary. I don't even know what it is supposed to do. It acts as a nice primer, smooths the skin and makes it velvety but then, if so you have to put foundation over it. It is a little weird to blend. I don't know if it is a 'foundation/bb cream' or is it a primer. I am confused.

Mixed feelings about this. Pretty sheer coverage, corrects darkness from hyper pigmentation and acne scarring, easy to blend, color (medium) works well for my dark olive skin (Mac C5, Becca Olive+Bamboo), it works beautifully underneath my foundation, and it doesn't break me out! Tho I'm a full coverage kind of girl, so my foundations usually cover up everything, making the CC primer useless. When I wear it by itself, it separates on my forehead and chin so badly. It creases very quickly, and gets patchy- I can't wear this on the days I want a sheer coverage and slight correction. Also I would love to see Tarte come out with more shades. I personally need a medium dark peach tone for my discoloration and the same lavender for days when my skin is just dull. Love tarte, but I can't see myself using this

I bought this product in the shade TAN along with a Tarte double-ended brush/sponge applicator from QVCUK for £27. This product lives up to it's claims. I have a lot of acne scars on my jawline, cheeks and forehead; this primer matches and evens out my skin so well, although, it doesn't completely conceal my scars. I am nc44-45 for reference ( I have deep yellow undertones). Sometimes I wear it alone on a lazy day or I wear a light coverage foundation over it for more coverage. I like to apply this primer in circular motions directly on my face and rub it in with my hands. The application is very smooth and feels very velvety in my hands. Despite the texture, this product can at times cling to any dry patches on the skin so it's wise to moisturise well before applying to the skin or use a setting spray ( eg. Fix +) on the dry patches after application. This product has a matte like finish but Tarte doesn't claim that it keeps the skin matte all day so it maybe wise to use setting powder on oily skins. I have combination skin and this product can start to get shiny (not greasy) 7 hours after application with or without a setting powder. Overall, this product lives up to it's claims and I will buy this product again once It has finished.

This product did what it claims to do to an extent. It helped with color correction and covering red spots/blemishes, but it is so heavy and greasy! Maybe it's just me? The girl at Ulta told me that the Tarte BB cream would not cover unless I used the primer under it. She applied the BB + primer to half of my face and BB alone to the other half. At first glance I could not tell the difference. When I inspected my face under natural light, the BB only side was very nice and soft with EXCELLENT coverage while the combo side was cakey, greasy, and heavy looking. NOT a fan.

At first, I did not like this but then I kept using it and it worked better somehow? I'm not sure what happened, like if there is a top coating on it or something that is different as you use it. But I really like it, I use it as a primer under my powder foundation. I got it a shade lighter that I wear to match.

This is okay....i used it for about a week, tried it under foundation and alone. It is a great concept and looks neat. I am a fan of stick foundations, but i think it made me break out and didn't do a whole lot else. It actually felt very dry on my skin, kind of a dirty feeling, which is hard to do because I have pretty oily skin. It really doesn't seem like a primer at all, under makeup it just made my makeup look more heavy. Alone was better, but not the coverage I would want, and for the price I expected more.

It's an ok product. I thought about returning it. The price is not sensible for what it is. It does give a nice smooth natural finish to my skin when worn alone, however it only lasts a few hours and it fades. I see a pore smoothing effect, not so much of a color correction effect that it claims to achieve. It is suitable to be worn alone for a nice soft natural look, just don't forget to set it with a powder beforehand. I won't re purchase too many other products to try.

Not for me. I generally love Tarte but this did not do what it said it would. Did not even out the redness in my cheeks and it looked heavy on my skin. It DID blur pores which I liked. But it was kinda a pain to apply evenly. Just didn't do all that it claimed it would. Would not purchase again, taking back to Ulta.

Overall, I enjoy this product as part of my daily make up routine, but I use it sparingly because of the price/product amount. I got this as part of a package in the color fair. I had seen reviews that the colors ran a bit dark/orange/warmer than my cool skin tone so I actually went out to an ulta before I bought the package online to see which color would match me best. Light looked a bit too orange for my winter skin, so I went with fair. After receiving the product I realized that since it smooths so nicely into my skin it wouldn't have been terrible if I had gone with light instead. I am, however, glad that I went with fair. The product itself is about the size of e.l.f's studio moisturizing foundation stick (about an inch in diameter, about three inches tall), but elf's stick is more of a foundation and this one is more of a primer. Tarte's cc primer also has green and purple wedges inside of the stick itself which are said to be color correcting. I do not have major color issues, only minor redness on my cheeks, and it helped for that, but I'm not sure how well it will work for major problems. Since I do not have skin issues, I occasionally wear it and some concealer/setting powder on days where I don't wear much make up and it does nicely as a light coverage, which is what I want. When I wore it one day under Tarte's liquid colored clay foundation, it was nice as a smoothing primer, but nothing that I wouldn't really find in other primers, especially because I have no real need for the CC parts. Buying it on its own at about $34 is a bit expensive for me, but since I got it as part of a deal, I think it is worth it! Edit: So I just wanted to add an update. I forgot to put on my moisturizer after my shower, as per my usual routine, and I saw some of it settle into the fine lines underneath my eyes about an hour later, like some of the other reviewers talked about. This never happened when I moisturize (nothing fancy, just Olay) so if you are having that problem, this might be a fix. I believe it is silicone based as well, so I make sure I avoid using waterbased make up over it. Overall positives: smooth/silky on face, good color for me, fixes minor color flaws in face, light coverage/can be worn alone Overall negatives: color range (runs dark), can settle into lines (not consistently, but it happens occasionally), amount of product/size for the price

First of all, I love the packaging and they give quite a bit of product tat would last a long time because of the pigment quality in this cc primer. I have moderately dry skin, more of combo/dry really.. im only 29 and dont have wrinkles yet... but, this settled into my fine lines under my eyes and clung to every little unnoticeable dry area and made it look like a full blown dry patch. I had to return, which sucks cuz I love all of the tarte products and have loved everything that I have ever purchased from there line :( booooo. wish this wasn't such a dry product!!