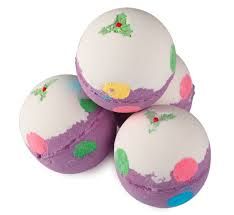 The 2019 version has black currant, bergamot and cypress oils. I get a lot of sweet vanilla /tonka/benzoin, which I suppose is the perfume ingredient. The scent is nice, it's very sweet in a candy or bubblegum way, which isn't my thing, but I'm a lot more tolerant of such scenrlts in the winter season. They have extra large ones now, filled with agar crystals, but I went for the regular one, which I find big enough. The bathwater turns very pink. It's not drying. Overall, it's a nice bath bomb. But I have one major issue with it. It turned my nails and hands bright pink. I held it under the water briefly, maybe that's why, but I'd still expect it to wash off. Nope, I had to remove it with micellar water. It also stains the tub. It's not a huge deal about the tub, I just think after a relaxing hot bedtime bath it's s not the best time to be scrubbing. I just want to go straight to bed. My skin looking like I broke out in a rash is very annoying though. I wouldn't recommend using this the night before you have to be somewhere early, due to pink skin. Unless you're attending a six a.m. pink-themed party, then go ahead. I won't repurchase this one, but it might appeal to lovers of candyshop scents who don't mind the cleanup. Edit, it's been a few days, I'm still pink. Fingernails, toenails, feet pink.

The pink 2014 version smells gorgeous(but not overpowering), made the bath water pink and silky. I emerged from the bath relaxed with soft, moisturised skin. The only downside of this product is the packaging (or lack thereof). The formulation of this product seems to make it more fragile than lush's other bath bombs and I lost a considerable amount of product due to disintegration.

The 2014 version is pink instead of purple. I love it - wonderful twilight scent that lingers, entertaining display of rainbow fizziness and a pretty pink bath with swirls of silver lustre. Definitely stocking up for the season.

This is officially my new favourite LUSH bath bomb. Too bad it's only here for the holidays :( It turns your water a deep pink/purple as it fizzes. Slowly, there are little colourful balls that come off the bomb as it fizzes, and this causes the top of your water to foam. It has a very pleasant scent and leaves my skin insanely soft (not oily).