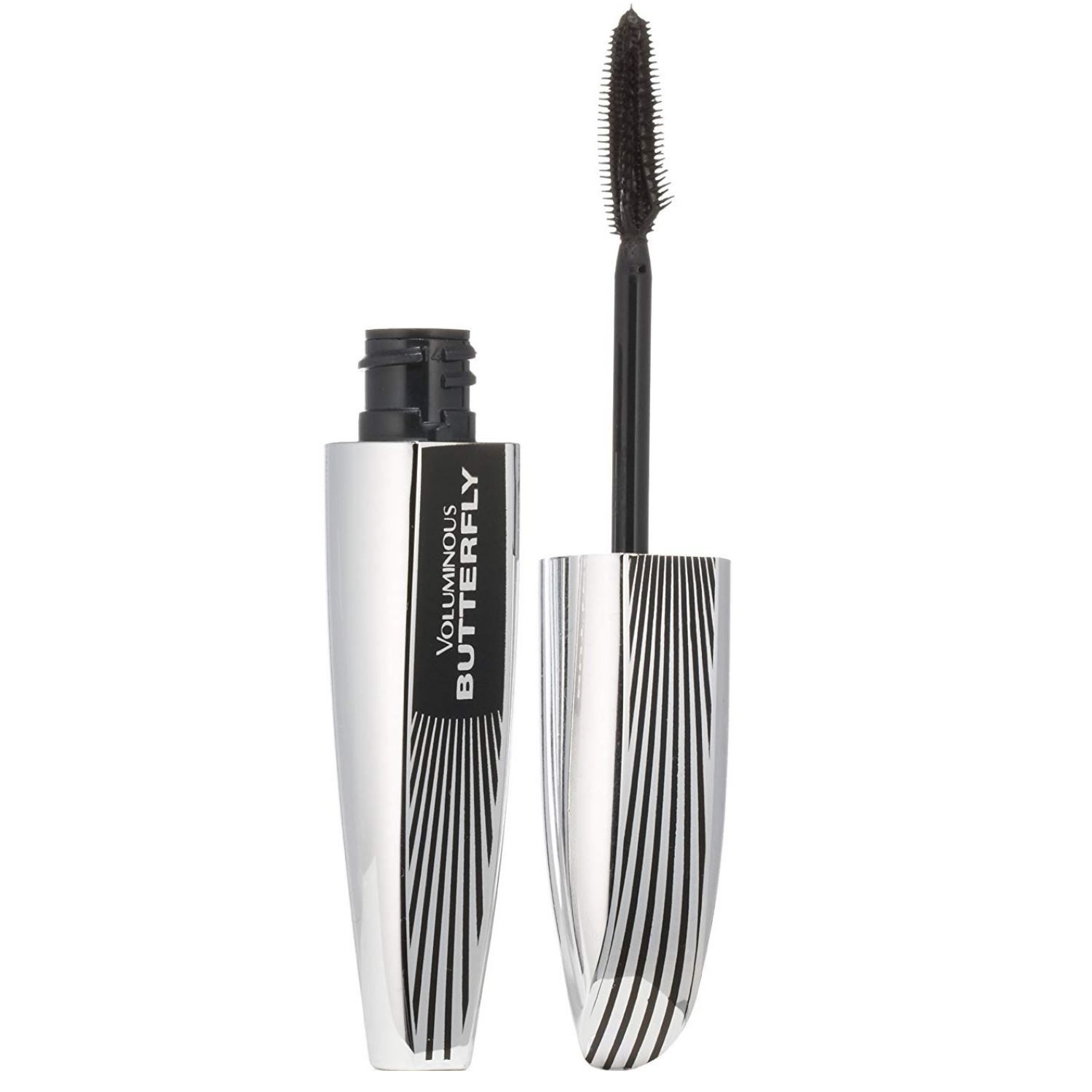 Had a hard time figuring out what part of this tapered wand to use where. The mascara was overly liquidy and made my lashes clump. The plain old Voluminous is far better. Will definitely not be buying this one again!

Sticky and wet. Makes my (already spare) lashes stick together. Smudges all over. Needless to say I do not like.

This is my favorite mascara that I've ever tried. It barely feels like there's any product on my eye lashes. While adding more definition, volume and a bit of length to them. The brush is amazing it keeps it from clumping. It helps separate each individual eyelash.

I've tried the new Butterfly Sculpt several times and I've decided I like it. I am impressed by the way it works on the lower lashes which is rare for a mascara. It takes a long time to paint the lashes on until they are just right, but the results are worth it. It has a totally unique plastic brush with one flat side and odd tiny teeth and is supposed to tightline the lashes. I don't try for that but it does build long, dark lashes. I just keep turning the wand to apply and then separate. If you add more than three coats it begins to get that stiff, lacquered look. So if I stop after two coats the results are very similar to the best mascaras. I just don't like the intricate brush design much because you can't just brush it on normally. It's a delicate process and the lashes will start sticking to each other because it dries so fast so you have to keep turning the brush to separate them with the comb before they dry. But if you have the time to invest, it's kind of fun and the results can be very good. Update: By the way - when I started removing it, I couldn't believe how resistant it was to my usually reliable oil based remover. It just would not come off easily. Then I looked at it and saw I had accidentally bought the waterproof version. I haven't used one of those in so long I forgot what they were like. Update May 27/16: I've realized that I can't stand the horrible ordeal of removing it. It's not worth it to me. I need a mascara that works and is removable with soap and water or just water. The cleansers - all of them - are too harsh on my skin. Therefore I am not using any of the industrial glue/resin/lacquer mascaras again and going back to the old school normal ones. A mascara this hard on the eyes is not a good idea. There are plenty of mascaras that give stunning length and volume and can be washed off easily. Update July 14, 2016: because of harsh makeup like this, I now use no eye makeup at all. I don't know if or when I will try makeup again but I have thrown out all of the ones that are weapons on the eyes, like this one. It seriously does not matter if the mascara makes your lashes beautiful, if it hurts you to remove it and it takes weeks to heal the eyelids. Update July 1/19: Reading this makes me cringe. It took me three years to heal my skin because of products like this mascara and all mascara removers. Harsh chemicals! I have found many mascaras that are gentle and work beautifully. Update Aug 20/19: I got this in Midnight Black and I liked it immediately. It had a creamy formula that built up my lashes beautifully. After reading my older review, I realized I had not tried the non waterproof kind. That was the harsh makeup remover, which gave me skin irriation, not the mascara. I'd say this mascara is not as good as Marc Jacobs which is my current favourite, but better than Charlotte Tilbury. It's on a par with Lash Sensational. It gives full, long lashes, but not a perfect look. It can't be HG because it started to flake a tiny bit after an hour, and it's not quite as good as Telescopic. I'll use it from time to time. I am raising my rating to three stars because the one star was based on the waterproof formula. Update Sept 5/19: Butterfly Midnight Black is a completely different mascara. It's nearly perfect except it has that plastic brush and it is scented. But it gives stunning lashes. I am raising my rating to 4 stars and it's only for the Butterfly Midnight Black. I will buy it again but not the others in the Butterfly line. And yes this is better than Marc Jacobs. It's as good as Lash Sensational. It's better than almost everything. Update Nov. 14/19: After two months, Butter Midnight Black has dried out and requires many coats. I'm disappointed that it is not longer lasting and I won't buy it again. I am so sick and tired of products that are wonderful for a few weeks and then have to be thrown away. There's no excuse for this except a deliberate plan to get women to buy mascara more often, thus increasing the company's profits. I'm lowering it to three stars for its failure to last a minimum amount of time.

I am reviewing the Voluminous Butterfly Sculpt version of this mascara. I have had this mascara in the waterproof formula for a few weeks and am really loving it. It makes my lashes look longer and fuller with just one coat. If you build it up with two or three coats it stays separated nicely and resembles false lashes. Because I did purchase the waterproof version I have not had any issues with smudging or flaking in any ways.

I just tried the new L'Oréal Voluminous Butterfly Sculpt mascara. I have very sparse, thin eyelashes but this stuff makes them look amazing! The brush is more like a comb and it really gets every lash and even gives an eyeliner effect at the very base.

at work a woman started digging in her purse and pulled this out! she says to me, &quot; I bought this and I don't know how to use it&quot; so I sat her down and we looked at the brush and I then applied it to her walking her through how to use the unusal brush. it looked amazing! needless to say when I left that day I went across the street to Walgreen's and got one for myself. not alot of volume/ fluff but really good length and curl with no eyelash curler involved. love that. it doesn't smudge on me or flake and it dried out in about 8 or 9 weeks( which I think is average) I lived adding this to my mascara collection and thank you to the lady who came into Sephora with a loreal product looking for help. you showed me a really cool product!!

I just bought this mascara and already LOVE IT! If you want a mascara with length and volume, this it. Other mascara's on my lashes never made a dramatic difference. But this, wow! At first I thought the wand was odd, but it really works. I'll be buying this from now on ???? my lashes got 3x their size, and no clumps.

Admittedly, I haven't yet tried the mascara, only the wand. But I really feel I must tell you how much I love it, and why. I will update this review as soon as I buy the mascara and test out the formula, which should be very soon despite the fact that I have too many mascaras right now. Can a woman ever really have too much makeup? Wait, don't answer that question. :P Anyhoo, yesterday I was in Walmart and there was this woman there with a small kiosk set up. As soon as I realized it was for L'Oreal, I made a beeline straight to her. Who doesn't love free makeup and coupons? Apparently, L'Oreal is coming out with a new line of moisturizers that are designed for women in different stages of life, such as 20s, 30s, 40s and so on. This sounds great, and the moisturizer I tried on my hand was decent, but the numbers are awkward, because they're labeled: 25, 35, 45, 55. So it's halfway through each decade of life. This is nothing short of odd, plain and simple. I know I got off on a tangent here, but I wanted to throw that info out there in case someone reading this sees them and has no idea what those random numbers on lotion jars mean. But back to the mascara. The nice woman gave me the wand to keep, but unfortunately there was no mascara to try with it, so I honestly have no idea how good the formula is yet. However, I can say with 100% certainty that if you like long, separately defined lashes then you will more than likely adore this wand. As far as I'm concerned, a mascara is only as good as its wand. It could be the most expensive mascara in the world, but if the wand is crappy, fuhgettaboutit. In this case, the wand is simply wonderful if length, not volume, is what you like. If you use a volumizing mascara first, then layer that with a lengthening mascara (which a lot of makeup artists do), then you might also really love this wand. For many years I was all about volumizing, preferring that over length, then I started to layer mascaras so I could have the best of both worlds. It wasn't until recently that I realized using a lengthening mascara gives a very clean, simple look that calls attention to the lashes for just being pretty. Sometimes the star of the show is the eyelashes, and for those occasions I prefer simplicity and length which this wand offers in heaps. * I know it doesn't matter, but I've never in my life found a mascara that both volumized and lengthened. It seems they're either good for only one or the other, because of the limitations of the wand. But maybe someday that special mascara will be created and we can all weep with joy. Until then, the hunt is on for the perfect blend of mascaras.

I was obsessed on finding for a mascara that would make my lashes look naturally long. I looked up some brands on the internet and I saw some pictures of reviews of this mascara I found that the it gave the lashes a good length but everytime it looked so clumpy and unnatural - exactly the opposite of what I was searching for. Anyway, I found the concept kinda interesting and the price waa ok, so i decided to give it a try. Oh, boy, I'm so glad i did! The brush is pretty complicated (i guess that's where this awkward looks you're gonna see on the internet come from), but once you learn how to use it, you're gonna get flawless lashes. At least its what happened to me! My lashes look so long and perfectly separated from each other, and with one application I'm ready to go! No, it won't really curl your lashes (you might actually want to use an eyelash curler with this one - still totally worth it), it won't give them crazy volume (well I particularly find too much volume kinda ugly) but it's such a light, fluid and nice mascara, I can't complain about that! I'm so glad I found this baby! PS: about the &quot;flaky&quot; part. Yep, it might flake... But only if you will keep rubbing your eyes. Actually the waterproof version almost doesn't flake and it's pretty hard to remove.