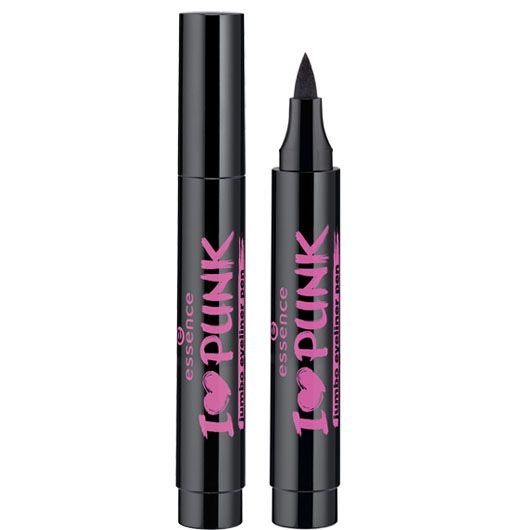 As usual with eyeliner pens they don't end up working for me. I stored this tip down for gravity's sake but it worked gr8 for about a month. I am so leery of buying eyeliner liquid pens coz this always happens. Better than any of the DS liquid pen eyeliners I used but kvd trooper is much better if u want a seriously good eyeliner marker. I would buy this again just to make my wings coz they came out very precise but make the rest of the line w a different eyeliner. I was expecting blacker but it wasn't grey. The tip cover & the rest of the cover kept separating but at least it kept the tip moistened.

God this is shitty. I read the reviews but still figured I'd get it since it was marked down to basically a dollar. On the first try, I thought it wasn't as bad as some people thought. It went on not super deep and dark, it was like a marker. Awkward but doable. I get how people say it's a light black, I get how people say it's hard to use. It's not very saturated. I keep wondering if mine is dried out. I also read that someone said it didn't cause those liner bald spots when you go over it. At first I noticed it didn't, but then it did after a while. Cuz lets be real, no one gets it perfect the first time which is what you have to do with this to like it ok. I added another liner on top to help make the lines more crisp, but that just made more bald spots. Ugh. I got it because it was so cheap and I wanted and easy liner for work (I can't bring in new makeup that I can't prove I paid for previously so I buy a lot of cheap crap there) but I seriously am debating returning it for my dollar back. Not sure just yet. But yea, I see why they are pulling this off shelves. On the second try: Better, but I still need more than one liner, which is how it always seems to be. It's on the eh side of ok. But at least it was cheap so that's kinda neat. Like I said this is a back up, but I would pay more for a better liner. I prefer Prestige liquid liner pots or their Total Intensity pen.

It's kind of ok for a drugstore brand, I am really surprise especially for its really cheap price tag...I bought it because I need an eyeliner so bad when I was away..the one thing that I had to complain was the plastic cover kept separating from the lid and then when you try to put it on make sure you use the tip and only the tip, if u accidentally hit the sides of the tip, black mess will occur.

Ok so let me start out by saying the cons for this product. IT IS NOT BLACK, its not a deep black its a very faint black, so it can't be used by itself. But its really good when it comes to creating precise winged liner, I love the thick tip because it makes application very fast for when you're in a rush, so I really love using it to make the wings on my liner, I usually go over it with the Essence gel liner in Midnight in Paris which is really black, or The Body Shop's black eyepencil which also makes it black. Another pro is it's really cheap and its CRUELTY FREE!!! YAY!

This was the first Essence item I bought and I am so disappointed by it. As a punker, I really thought this eyeliner was a dream come true alas the colour isn't even a dark black! SUCH a waste of time, ugh.

This is difficult to use. I do a lot of thick eyeliner looks, but I found that the tip and the end didn't give off much color while I had to use the side. Creased a lot too. Wouldn't recommend...

This was cool. It wasn't just any liner, it was a felt tip marker type. I got it in black, which I think was the only shade available. It went on well, and had good staying power. The color itself is great when applied. It was cheap, essence always is. I got it for roughly 3.99. The packaging I liked, it was cute. Jet black marker pen with pink "I <3 Punk" writing. When you opened the cap, there was a plastic cap defending the felt tip from the top. This became annoying and awkward eventually, as it got stuck a lot more than once. It slowed me down applying makeup. Overall I would totes buy again. It's a great product and ticks most of my boxes and I have recommended to friends.