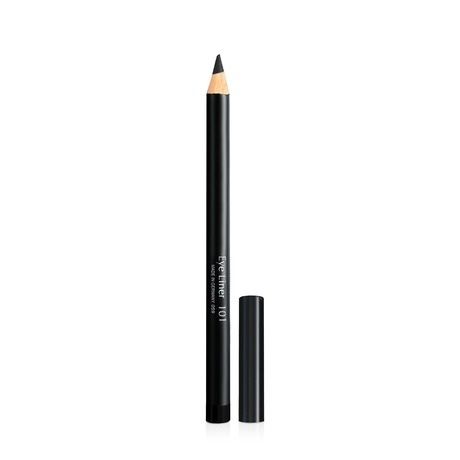 Overall I like this eyeliner, but the lasting power isn't the greatest and I think for the price (which is quite higher than drugstore eyeliners) it should deliver more. I have used this to create a smoky wing, line my waterline and sometimes just a simple eyeliner on my top lid with no wing. It's definitely long lasting but it is not budge proof. Towards the end of my day (roughly 12 hours later, when I take my make up off) it won't be smudged and I have not had raccoon eyes with it, but it will be quite faded and worn away (and sometimes, mostly gone!). It's great for the smoky eye look, when it's blended out. Oddly enough it usually doesn't fade away in this case. I like that it's an intense black, not like a faded grey or anything, and it's quite creamy and easy to apply - I never have to scratch my eye out when using this. I think considering the price you can buy much better eyeliners for a bit cheaper. I don't feel like this one is earth shattering or a must have in any way, shape or form. It's good enough for me and for daily use but it's not revolutionary. I gave it four stars because the reality is there aren't that many cons about it - I think a 3.5 would be a more accurate rating, however.

I bought this for the rave reviews on this being a non-budging, great tightliner for the waterline. I have been looking for just that and saw many you-tubers and reviewers demo this. I bought it in 77 (black) and was so excited to get it. I have tried it for a few days now and each time...huge fail! I love the pigment, but hate that it smudges, runs and looks horrible. Much like black liner does in a horror movie. My quest is for a non-budging, liner that can go on the waterline and even be tightlined that stays all day. This didn't even last 3 hrs. I went to the movies, and afterwards checked the mirror to my surprise! Raccoon eyes. Not happy, wouldn't re-purchase. Only pro, is the pigmentation is black and it's creamy and goes on effortlessly...comes off that way too!

Like this pencil a lot, a wanted a good quality pencil so I decid to buy this one in inglot, it was the firts product from this marc that I buy and I am happy. Must better than the eyeliner from essence.

I got the eyeliner pencil in 103 a deep blue, um words cannot express how c**p this is!, it is really hard like worse than a colouring in pencil, and it looks like one too. It hurts my eyes wherever I try to apply this wether in the tight line or on the lid. It hurts like HELL beware!