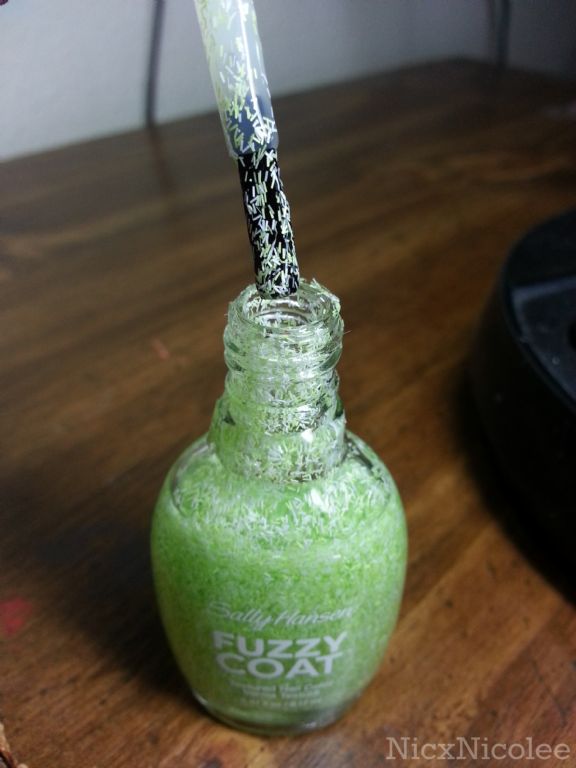 This is the only polish I've ever hated so much out of the bottle that I didn't even finish putting it on before I got annoyed and had to take it off. The fibery bits are too sparse and if you treat it like a regular glitter polish and sort of blop it on and spread it around, it's way too thick. I used &quot;All Yarned Up&quot; (yellow, blue, and coral fibers) over Sally Hansen's &quot;Glow With It&quot; (bright yellow with a bit of shimmer) Insta-Dry (which bubbled on me, like all SH products do. why don't I ever learn?) and the colors looked all right together. The polishing experience was just awful. I'm no newbie to glitter or textured polishes, but this one was the pits.

I saw it by chance at K-Mart today and it was about 5 bucks. I'm use to the dollar store cheap stuff. It all works the same for me. I tried it before I bought it and .... I just love it so much! It isn't too loud and its kinda punky. I pray they come out with a few more colors and they don't discontinue it.

I wasn't too sure about these Fuzzy Coat textured nail polishes, but I have to say I love them. Whether painted by themselves (multiple layers needed) or over a solid base colour, I can't help but love how the texture is. I'm a bit taken aback by the low ratings and would be inclined to agree with others that perhaps it wasn't what one was expecting, especially when they first came out. I have fuzzy peach and all yarned up. The one con I have is its super difficult to remove, but makes for a long lasting manicure.

I first applied this polish (shade: Fuzz Sea) without a coloured undercoat. Even after 3 coats the fuzzy bits were still quite sparse on my nails and I wasn't that happy with the result. Applying a coloured polish first makes this product look a LOT better, really unique and I got a lot of comments on my unusual nails! The texture feels rough and after a day starts catching on clothes. A clear top coat would probably help with this! Even without a top coat the polish lasts well without chipping. I would probably buy it again, as it is something unique and with different undercoats the possibilities are endless!

I have Tweedy, the black and white one. I really like this, has good coverage for a topper, but, for anyone reading this, this polish is not supposed to be worn on it's own! It is meant to be worn over another colour!

I'm surprised at the low ratings on this product. I think maybe it is because the people who have bought this were expecting something else. For what I purchased it for I love it. I will include a photo of my nails. I put a solid base coat and used the fuzzy as a top coat to give my nails a cupcake sprinkled effect look. I'm a fan and would repurchase these.

The first time I saw these I was compelled in a way I've never been by a nail polish before. I immediately threw it into my shopping basket and couldn't get home soon enough to try it. But when I got home, I looked at the bottle again, and realized something had changed. I looked at the nail polish again, and wondered what I thought when I bought it. First of all, the name kind of weirds me out. &quot;Fuzzy Coat&quot; makes be picture moss growing over a rotten tree, or maybe an old man topless at the beach, with a nice coat of back hair. Anyway, the name didn't enamor me as it first had when I saw it on the shelves of Walmart. Now, on to the actual polish. I wanted my nails to be completely covered with the texture, but it took me about four coats to do this. I bought the shade All Yarned Up (which doesn't make sense to me, is it supposed to be some kind of pun? I know I'm dense, but I really don't get it.) The other shades may have better &quot;pigmentation&quot; or saturation of the glitter, I guess it would be called. Another thing I don't like about the nail polish is I feel it's not really a polish I could wear everywhere or for every occasion. It's one of those polishes I don't feel looks pretty, but looks more unique. It's a polish that will get some reactions from people, but I personally like my nail polish to have a bit of understated elegance (which is odd because I'm probably the least elegant person ever) If I wear this I just feel like the girl with the weird nail polish.

I bought my first bottle yesterday, it's a light blue with white. I can't remeber what it was called! It didn't say anything about putting on a coloured bass coat, so I put on 3 THICK layers of the fuzz coat! The finished product looked nice but it was very uneven around my nails because the &quot;fuzz&quot; kept clumping onto the brush. This is going to take forever to remove!

I will agree that this polish is a little tough to remove, but overall it created a unique look that I enjoyed (particularly as an accent color). The removal process is also less frustrating if you are only dealing with it on a few nails. I would say that the fuzzy title is a bit misleading because it certainly doesn't feel or look like actual fuzz. This said, when I applied two coats of &quot;FUZZ-SEA&quot; over a lilac colored base coat it left a surprising Missoni-esque print look that I thought was very pretty!!! I haven't used any other nail polish that has given this sort of result! Give this polish a try! Use it to create a gorgeous new nail pattern, rather than expecting it to make your nails look fuzzy. I don't think you will be disappointed. :)

As my username might suggest, I am addicted to nail polish! When my Coty rep showed me these I ordered them for the shop straight away. I was lucky enough to have a play with them all while she was there, and she gave me some good tips on how to get the polish to look the same as in the promo pics. First, apply 1 thin coat of the polish, and let it dry. When applying the second coat, don't 'drag' the brush across the nail like you would with a regular polish- place small blobs of the polish on the nail, and push/spread the glitter around with the tip of the brush. To get full nail coverage, you'll need to repeat this step another 2 to 4 times. Finish it off with the SH Insta Dri Anti Chip Top Coat, so that it dries quickly and prevents your nails snagging on your clothes and hair.