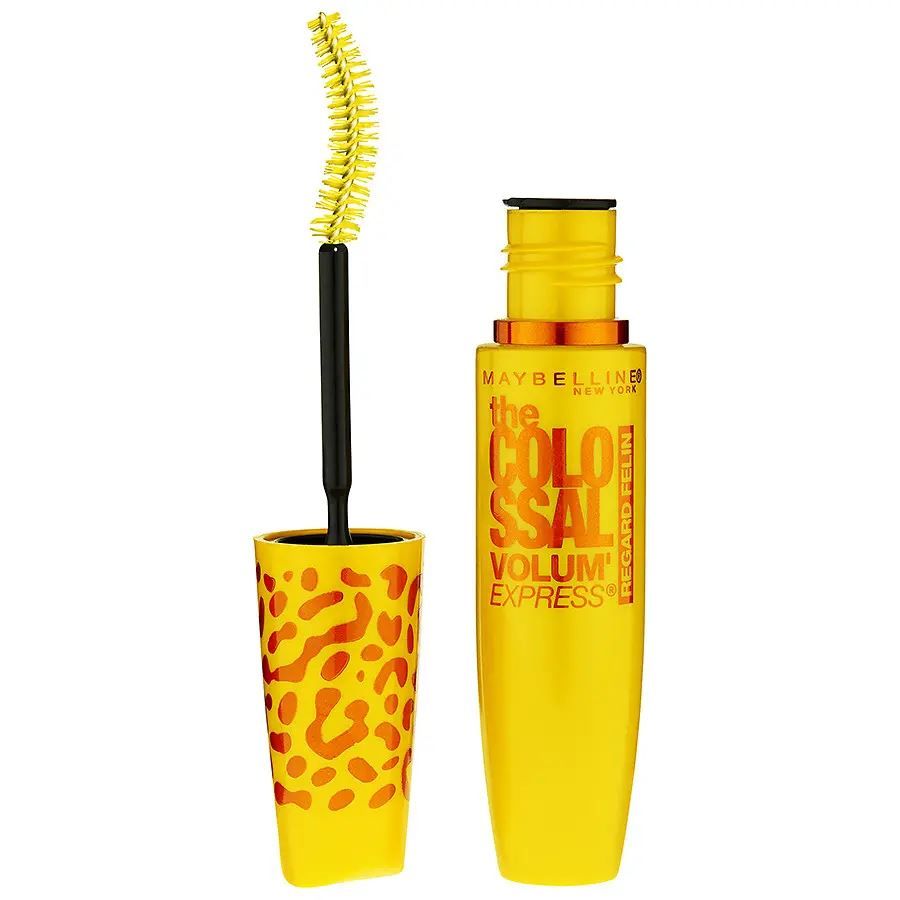 This mascara is a lie. It is not waterproof, it does not give a cat eye effect on my lashes, I think the only good part is that it doesn't have fall out throughout the day. My lashes are naturally slightly curved and very curved at the outside. I always curl my lashes and still no 'colossal volume' lashes. This mascara acts more like full n' soft. It gives some length and color, great for looking like you're not wearing makeup. Price and packaging are fine but I'd prefer if it did something.

Really good mascara for lengthing the lashes! Would definitely recommend!

I got this because I read that a waterproof formula would help my lashes hold a curl. No luck. This formula does lengthen, but it hardly thickens at all. The curved brush is too long and hard to maneuver. It takes a while to dry so I end up dabbing with a Qtip to get black spots off my eyelids, and it smudges a bit during the day. I really want to find a good curling mascara but this isn't it.

It is clumpy. The wand is terrible. The first time pulling it out product wasn’t on entire brush. Because of brush shape, there is no stopper to reduce the amount that is on the brush. It made a huge mess all over the mascara vile. The application was messy due to excessive amount on brush even after trying to scrape some off. The application was clumpy and harsh edged. Completely hate this product. They do not carry a product satisfaction guarantee. Luckily, Walmart will take it back with my receipt from yesterday and the original packaging as this was the first use. Extremely unhappy with results, application and lack of satisfaction guarantee.

Short version: I hate this, but you might not. My mother loves it and was the one who recommended it to me, so obviously it can work for some people. Just not me. The splattery, thin formula does my lashes few favors. Though I gave it several tries, it without fail leaves smudges and lash marks on my upper eyelids, regardless of whether I use eyelid primer, setting spray, nothing, everything, anything. I won't buy it again.

Really like this mascara and have been using it for months. Starts off wet like most but dries up to my liking after a few uses. Stops the transfer onto my lashes and the skin around my eyes. The formula seems to hold my curl relatively well, few hours, but that's awesome considering how stubbornly straight my lashes are. I do like the wand for separation and curl, I will be saving it once I throw away the bottle. I clicked that I would repurchase, but I'm trying to shift to more cruelty free products when I can so I'll be on the look out for a good cruelty free mascara.

After using two tubes of this (they were in a double pack), I've formed a complete opinion about this. Let me start off with a description of my lashes for reference though, they're long and straight and pretty full for the most part. I feel like the only way to get volume is to use more than two coats which isn't that bad, it just gets ridiculously clumpy. Plus, let's be real, one coat doesn't do sh*t for me except darken my already black lashes.The part that irks me is that it does more lengthening and defining better than adding volume! In addition, I don't think it does much for fanning out lashes to that &quot;cat eyes&quot; effect, nothing really happens there. Since it always adds length to my already long lashes, I always have to use q-tips to clean up all the smudges it gives during application. Thank the Lord I don't use eye shadow all that often because that would just piss me off having to fix smudges in my freshly done eye shadow! I feel like the wand just accentuates the amount of eyelash smudges since it's curved as well. In my opinion, the regular colossal is a whole lot better in terms of volume, less eyelid smudging, one coat application, and practicality.Oh by the way, it's a hell of a fight getting this off my lashes! I really expected a lot more from this mascara but it shows me to not buy things from double packs I haven't tried before and that it's original big sister (Maybelline Colossal in Glam Black) is way better for me!

I like to think of myself as a fairly positive person who goes out of their way to focus on the bright side and embrace the simple pleasures of life, but today was a major hiccup- I got two hours of sleep last night, and then-- THIS. MASCARA. No. Just.. no. I seriously contemplated giving this one lippie, so disappointed am I with it, but in the end two mitigating factors saved it- the reasonable price (around $8.50), and the fact that this mascara really does create and hold a curl like no other. I'm going to stop being a sweetie right about here, because I have officially run out of good things to say about this. Had this been a high-end mascara that I spent a bit more money on, it easily would've been a one-lippie rating. Here's the rundown: THE WAND... For a mascara marketed as volumizinng, they couldn't have picked a wand more ill-suited for that task. It is a curved, rather skinny and stiff wand that built next to no volume but smeared NONSTOP as I tried to apply it to my upper lashes. As this is not a very wet formula, I blame the wand for the incessant smearing rather than the mascara itself. I like to think I am no longer a makeup novice and can get through the average day without smearing my lids up with mascara, so badly I have to reapply my eyeshadow after cleaning it up. This is, to date, the only mascara I can recall causing this. WHAT HAPPENED??? THE FORMULA... Sorry Charlie, but the wand and the smearing it caused ended up being the least of my problems. After seeing it was able to hold a curl extremely well, I had delusions this mascara would redeem itself. If wrongness was a dollar, I'd be rich. This ended up transferring (aka smudging) SO BADLY, above and beneath my eyes, that even after touching up my undereye concealer and eyeshadow midday (which I hate doing), I left work looking like a panda with HUGE BLACK DOTS and SMEARS all along my browbone. This isn't my first makeup rodeo and I've done the smudging walk of shame before, but this was straight up embarrassing. To all the lovely people at Maybelline, and the other reviewers who loved this, I am so, so sorry, but this was pretty much the biggest makeup ultimate fail in recent memory. I have used mascaras that made my lashes look pretty dull, and couldn't hold a curl, but none have smudged like this did, and I don't even have oily skin. As someone who battles undereye circles, the last thing I need is more darkening action going on up there! Boo, hiss.

This is my current HG mascara. I tried it out after my disappointment with Maybelline's Lash Sensational Mascara, which I find very thick and clumping and transfers on my eye area during application. However, Maybelline's Colossal Cat Eyes is awesome! I loved the curved brush, which I find to be curling and lengthening. When I first opened this up, there were no clumps at all either. Now that I have had this bottle for a little while it is slightly clumpy, but less a lot less so than Lash Sensational. I also really love the packaging (I am a cat lady, lol) and it smells kind of nice too.

I love this mascara on my short and straight Asian eyelashes! I'm not really seeking volume because I find that the more volumized my eyelashes are the less lengthy it looks. (The Colossal Volumizing Waterproof mascara is really good with volume but I don't like it because it make my eyelashes look fat and short.) So, this mascara is perfect for what I want because it emphasizes my eyelash length with no volume. Basically, those seeking volume should not aim for this mascara. Other than that, it also defines my eyelashes and keeps it curled for the longest and I just love it! It looks so natural! Along with that, it doesn't smear even though I have the oiliest and most watery eyes. Yay! I'm definitely buying this again once I run out. It's officially my holy grail!