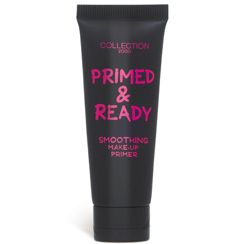 My review is based on the quality of the product, not the price. I don't believe in marking something up just because it's cheap, because that results in deceptive reviews where poor performing products are rated better than more expensive but better working products. It also messes up reviews for people in other countries with different mark ups. I made the mistake of buying this as my first primer because it was super cheap with good reviews and I wanted to "test" primer. Because of my lackluster results with this, I didn't buy primer again for another year or two which I now regret because good quality primer actually doubles the length of my weartime, and this is not at all indicative of the much better versions out there. This primer did nothing special. It barely extended the wear of my make up or made it more natural or poreless or matte or whatever. There was so little difference that it wasn't worth the extra two minutes in the morning. The only good thing about this was that it made my skin FEEL softer and smoother when applying my foundation afterwards but meh, I have plenty of skincare items that will do that so buying this for that effect is a waste of money. After a couple of months the tube started getting those gross white balled up chunks that some primers get (I had the same issue with Maybelline Baby Skin) and it resulted in white clumps on my face which made this far too much hassle to bother with. The packaging also leaked slightly, but not in a way that made it get everywhere. I had dehydrated/combo skin at the time and this didn't actually make my skin look smoother, it just felt that way. I'd have been better off just applying more moisturiser than this in the morning. I love a good deal as much as the next person and am always looking for ways to save money, but honestly, don't waste your time on this one if you do want to significantly increase your wear time. Primer is NOT essential for everyone so if your make up is already lasting long enough, then you don't need it. If you do want to extend your wear time noticeably and you have the money to burn then I strongly recommend Elizabeth Arden Flawless Start Primer. I've been using my tube 5+ times a week for over a year so don't be too put off by the higher price. Previously my make up would only stay matte for ~two hours (used in addition with mattifying powder) but with the EA primer, I get about five hours. It has never suffered the white clump effect, or leaked from the packaging. If I don't use it with mattifying powder because I want a natural look that day, then it maintains it well. I think this Collection primer is more effective than other primers that are around the same price bracket, but that's really not saying much since it makes so little difference. Don't be suckered in by the "you need primer" trend. You don't if you're already fine with your results.

This is the first primer I ever brought and probably the only one I will ever buy. The texture is amazing and works well with my skin. When I apply it to my skin, it spread easily making it easy to apply. I only need a small amount, and it covers my entire face with no problem. The primer makes my skin feel extra soft and looks great. I definitely love this product and will continue to buy it.

I had never used a primer before buying this product and was pleasantly surprised! The texture is brilliant and a little goes a long way, I've had mine for around three weeks now with still a quarter left (I use it every morning). My foundation goes on easily and lasts most of the day, imperfections are disguised better with the primer too. Packaging is simple but for the price it's to be expected. Brilliant product, I would defiantly recommend.

I brought this product for my holiday to wear under my foundation to prevent it sweating off. I was really pleased with how it went on and it's staying power. I recently started putting it on my eyelids as a eye primer and I have to say, for me it's better than urban decay primer potion! No creasing or sliding off, the colours stayed pigmented all day! This is a really good product would defo repurchase!

Primers that I love include benefit 'porefessional' and Clarins 'instant smooth perfecting touch'. However, I am a primer/mascara/foundation junkie and am always on the lookout for the best. I was skeptical about this at first as I'm not a big fan of all collection products. At first I didn't think I would like it as when I first squeezed it into the back of my hand it came out quite lumpy and greasy. I ended up squeezing a bit of it into a small pot to see if it would smooth out and it did instantly. It's a brilliant product for the price. Would prefer if the packaging had a pump but I guess your not paying for the packaging and if this product was adopted by a high end company I don't think I would be able to tell the difference. Well done collection!

I don't understand the positive reviews. I don't have dry skin yet this would flake as I put on make-up, and it just made my skin look like it was peeling in some areas? Very disappointing and doesn't compare to their Primer Spray.

I am new to reviewing and forgive me I am little dyslexic! I have been using this primer for about four months and it is brilliant. The texture is silky and melts into your skin straight away. Sometimes you think have you put enough on i would this is the only problem not knowing if you have got all the areas. There is no smell to it which personally i am pleased with as my rimmel foundation has a lovely smell and i wouldn't want it to mask that. The packaging however is rubbish. The lid top has broke on the few that i have bought and i wish it came in a bigger tube maybe a pump action? I have very sensitive eyes and It works around the eyes and seems to diffuse the wrinkles i have, I would recommended this product its cheap and works a treat covers all deep pores

I have just put this primer on my face and I love it so far! Obviously I can't judge from now because I've only used it for about 10 minutes but it makes my skin so soft and poreless, I love it! I will update later on whether this primer makes my makeup stay longer than usual or not.

For the price, this is absolutely fantastic. I was not expecting this high-street primer to do anything for me, but it makes my makeup last SO much longer.

I have been very impressed with this inexpensive, effective primer. It goes on like a dream (a clear, silicone gel) and makes my skin feel so smooth and ready for foundation. I apply it after my usual moisturiser and it evens out my complexion beautifully. Would highly recommend.