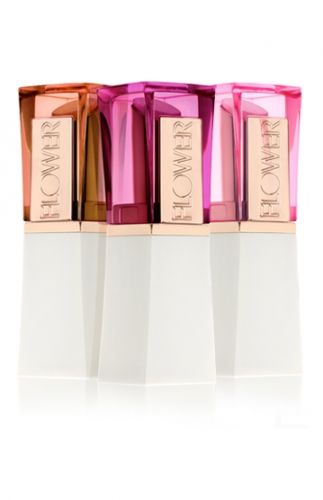 This is an amazing product. I saw them on deep discount in my local Walmart ($2 each!) but I checked reviews on MakeupAlley first and when I saw the reviews were mostly positive, I picked up 2 shades: Honeysuckle and Rose-y Future (I think is the name). First, the formula: this is exactly what a lip butter should be: creamy, moisturizing, glides on smoothly without feeling 'slimy'. But the color payoff is NOT like a butter, it is like just a slightly more sheer version of a full lipstick! I don't like the complete opaque, caked on look and feel a lot of lipsticks leave behind, but these lippies glide on like a balm but leave a beautiful wash of color that is not too sheer, but not in your face either, which is EXACTLY what I love! I went back to Walmart the next day and bought all the other shades that were left, plus an extra Honeysuckle which is just gorgeous (a creamy peachy nude with just the right amount of shine). The only downside is their staying power isn't the greatest, but they are a butter, not a long lasting lipstick so that is to be expected. Plus, I don't mind reapplying, there are no weird smell, taste or texture issues either. I have not experienced any the packaging issues other reviewers have mentioned, all my caps seem to stay on without a problem. I am sad that Walmart won't be carrying this line anymore, I also bought 2 nail polishes yesterday but have not tried them yet, will provide update later on those.) Overall, I have to say that these are my favorite lip products of the moment and if you see these on clearance, grab them while you still can!

Love... Love.. LOVE I bought one for 3.50 (which I guess means they're discontinuing it?) and went back the next day and bought half the range. These are SO nice! Hydrating, comfortable, glossy and surprisingly long-lasting for a lip butter... All the colours I have are beautiful and range from perfect no-make up make up lip shade to effortlessly cool colour for a casual night out. Out of the 6 or 7 I own, I only have issues with the cap on one of them, which isn't ideal but I can definitely live with that. I plan on living off of these until the liquid lipstick trend has blown over.

Haute Honeysickle is gorgeous! It's a peachy nude shade that would probably compliment most fair to medium shades. I've purchased other shades, too. Each of them are so hydrating and make your lips appear more plump. There's no gunky feel or bad taste. I have yet to find one FLOWER Beauty product that hasn't impressed me. This is no exception. I bought three lip butters, gave one to a friend and plan to never, ever be without this particular shade. It's so beautiful and natural looking. My lips but better!

I purchased the Nice Bloom-ers! shade. I do like it a lot, it's a light wash of color and and it has a nice hydrating effect and it looks wet and shiny. It works alone if I just want a bit of color, or as a gloss over a darker shade. My issue is the packaging. As others have stated, the cap doesn't stay on. The nature of this product is that it's something that needs to be reapplied from time to time, which is not a problem at all, but the cap falling off is problematic if you take this with you anyplace. Additionally, the packaging is pretty bulky for the amount of product you get. I only like to carry a small makeup bag, and this takes up a lot of &quot;real estate&quot;. Because of this, I just use it at home. That way I've always got a little something on. It's great for this, it can stand up on a table or shelf and not roll around all over the place. So the packaging isn't a total loss, and it's a great gloss for a great price. I just hope they improve the packaging.

I've been pretty selective when purchasing the products from Flower Beauty and I've loved all but one so far. I will agree with the reviews on this related to packaging, it might look cute but it is just not conducive to long term carrying around in your purse kind of use. I purchased the color Sheer Snapdragon and LOVE LOVE LOVE it! It slicks on your lips with ease and it is the nicest shade of red, but not in your face red. More like a wash of tinted gloss but with enough pigment to make my blue eyes &quot;POP&quot;. I have a really hard time finding lipsticks in this color that flatter my skin so I am definitely a fan as this one matches me perfectly! Flower is comparable in price to any of the other drugstore brands but it's edging out the others in my opinion with their creamy texture and staying power. I will likely keep purchasing (just not BB cream as the color selection doesn't meet my needs) these products.

First off, I am a big fan of Drew Barrymore. When I found out that she had her own beauty line at Walmart, I felt like I HAD to have it all. However; upon checking the prices, they weren't too cheap. I bought this lipstick in Bare-ly there and did not care for it. It settled on lip lines and I had higher expectations for it. But then I took it out again after a couple months and gave it another try. This time around, it was better but still sticky. It's not worth the hype or price in my opinion and don't always listen to what the gurus on YouTube tell you. Remember, it's their opinion just like how this is my opinion. But if you want a good quality Flower Beauth lippie, I love their matte lipsticks. Spend your money on those instead of you're into matte lipsticks and they smell like flowers!! ;)

I got this in the color &quot;Barely There&quot; after Tati, aka GlamLifeGuru, recommended/raved about it. I was admittedly hesitant, as I had bought one of these a couple years ago and did not care for it. First off, the color on my lips looks like nothing she swatched on her hand. Again, that is mostly my mistake, because I know lip products very rarely look the same on the lips as they do on the back of the hand. But..this totally 'nuded' my lips out, ie, this gave me 'corpse' lips. Not pretty and not flattering at all. I can't even see layering this over top of something, because the pigmentation is so poor. Second, it settled in the fine lines of my lips and gave me 'old lady lips'. Just looked bad. Also, for a 'balm,' I did not find this moisturizing at all. In fact, I found it to be quite drying. Lastly, the packaging. While it is pretty to look at while sitting on the vanity, it is not very practical and very bulky, just not a fan of that. The package looks pretty, but feels cheap. I wanted to like this, I really did, because it looked so pretty in the swatch. But this will likely be going back. I know it was only like $7.00 or so at Walmart, but this is like the 4th, 5th, maybe even 6th Flower Cosmetics product that I bough that was a fail. Their eyeshadows are quite nice (even if some of those can apply patchy and not that great of pigmentation), but pretty much anything else I've tried from them was a fail, for me, anyways. I just need to give up on this line. Pity, because some of the colors of many of the items look really pretty. But the performance is not there. At least not for me..

Again, lip butters are all so different in intensity, slickness and staying power. This is okay but I absolutely hate the shape. It's hard to apply no matter which way you hold it.

The packaging ruined it for me. The cap does not stay on. What good is a lipstick if you cant carry it in your purse for the day? It sat sadly in my bathroom drawer and eventually i just threw it away. Disappointing.

I like the actual product, but the packaging sucks. Looks nice, but overtime the cap starts to crack and won't stay on the tube. They need to rethink the packaging to make it more durable. I've had the same problem with the eyeliners. The packaging cracks and breaks easily. I haven't had this issue with any of my other drugstore brand lipsticks or eyeliners. I would buy the lip butters again, if the packaging changes.