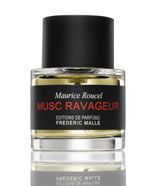 This is The One, at least according to my adviser at Frederic Malle responding to my questionnaire. He did recommend a couple others to address specific concerns, but this is the one he recommended in response to my personality and style answers–the core of the argument, as it were. I was a bit bemused by this, as Musc Ravageur is not one I would have thought likely for the honor–although I didn’t think I’d dislike it, either. Musk and woods, with vanilla and sweet spices. And no flowers. It sounds like the scent equivalent of those weighted blankets they recommend to soothe anxiety–which seems so counter-intuitive that I feel a bit anxious just thinking about it. But considering my specific answers to the questionnaire, I think I can see where he got the idea. I said I wanted my scent to be “introverted but intense.” Well, I don’t know how “Ravageur” I am–very cool name, though!–but this perfume does suit someone who sorts the laundry every week and ends up with a pile of dark clothes twice as big as the light-colored ones. Also, I said I usually wear “soft knits with dramatic jewelry,” and this is certainly Soft Knits with Dramatic Jewelry in a bottle. The touch of brilliant citrus at the top leads quickly into the deep darkness of the other notes. I often find cinnamon problematic, in perfume as in food, but I like its use here; it keeps all those dark opaque notes from smelling flat. The fragrance gets increasingly vanillic as it wears, but the vanilla, though creamy, is also smudgy with musk and woods, so that this unisex scent is not too sweet for a man. Opinions seem evenly divided on just how “Ravageur” this stuff is. I fall in the middle here. I wouldn’t recommend it if “clean and fresh” is the highest praise you could give a perfume. It is a straightforward fragrance, and a very sensual one. But it doesn’t smell like a hooker who’s been working too hard. In spite of my fears of being smothered, I feel comfortable with this from start to finish. Maybe I could use a weighted blanket after all. When I first tried it, while I liked it well enough, something in it reminded me of root beer–I guess the cinnamon and vanilla–and I don’t like root beer. But for some reason, the more time I spent with it, the less I smelled root beer, or the less bothered I was by that. By the last couple of wearings, I enjoyed it heartily all the way through. So I might go back eventually and change it from a 4 to a 5. Time will tell.

I have numerous 10 ml manufacturers early editions of Musc Ravaguer. Agree that it's a global oriental much in the style of Shalimar - an updated Shalimar with Lavander. (Current Shalimar extrait is too powdery for me; my favorite Shalimar formulation is the less powdery, slightly more citric EdC in the glass disc stoppered bottle, glass stopper from the 1960s). When I have been in the mood to wear this style of fragrance, I admit that I tend to reach more often for vintage dead stock manufacturers samples of Creed Jasmine Imperatrice Eugenie, which, despite its name, is more about creamy sandalwood with lush yet powdered dry down. People who dislike powdered finishes should IMO avoid Musc Ravageur, Shalimar and Jasmine Imperatrice Eugenie. If you want something like musc ravageur, but less powdery, less feminine, please consider the vintage 1947 Le Galion Special for Gentlemen which is a unisex cross between Jicky and Shalimar. Although, like MR, it has Lavander, IMO it is not an aromatic fougere but rather a light citric Amber oriental. Le Galion reissued SfG last year; I have not tried the reformulation.

The opening of this reminds me of Shalimar. Same opening without the powder. Then I get lots of clove &amp; spices. it's very nice. However for the price, it didn't WOW me.. It is very warm, sexy, cuddly. It's nice.

Ordered a number of samples from Aedes. Musc Ravaguer was among them and one I'd been wanting to try for quite a while. I had high hopes for this one and was really excited to try it. I'm looking for a musk with some skank to it. What I got from Musc Ravaguer was a boatload of sweet cloves with some powdered sugar and baby powder dumped on top. That's all. Not for me. Next samples order will include Serge Luten's MKK. Hope I have better luck with that one.

I requested a sample of this from another swapper...recieved it with such high hopes, but to me its, just &quot;eh&quot;. On me, a glorified Toujours Moi. I will stick to the original TM.

I am on the proverbial fence. Last time I tried MR, it seemed to me to be a dense head shop sort of musk with lots of nag champa and resinous notes. Either my memory is incorrect, or they have reformulated. What I get now is a modern version of Shalimar. The initial vanilla-lemon blast, softened by flowers, against an amber dry down. It is nice. Very nice. But not nicer than Shalimar. There is a bit of a naughty kick at the end, some tiny fillip of animalic pong. This gives it a wry twist, and such a move would be beneath the dignity of Shalimar. It gets points for that.

Oh my, thank goodness I sampled before buying. Upon reading reviews, this should have had everything I love in a fragrance, including being composed by Maurice Roucel. But sadly, on me, all I got was spice, spice, spice and amber. VERRRRY spicy and sweet and bland. Very like Obsession or even Tabu. I got no musk, no dirtiness, no &quot;ravageur&quot;. Smells like something a teenager would wear to the Friday night dance at the highschool. So far, the only Malle I've liked has been Carnal Flower. They all seem to lean way too far on the sweet scale and lack complexity. But that's just me perhaps. Try before you buy.

This is a &quot;dirty&quot; fragrance - and I mean that in the very best possible way. Very very sexy.

Ordered some of this from Frederic Malle with quite a few other untried goodies. Of them all, this one captured me. It is downright smoldering sexy musk. Lasts a long time too, so a dab will do you. It smells unlike anything I have ever tried (although for some faint reason, it reminds me somewhat of Chergui). This fragrance is suited more for the colder months than the summertime as it is quite strong. I am definitely going to buy a full-size bottle as it is worth every last penny . Edit 3/20/14: Just got my first full bottle. Yippee!! Watch out world. Here comes the musky vixen and she's taking no prisoners!!

How is everyone smelling sex in this? It doesn't smell remotely human/animalistic; it smells like the chemicals in Carmex lipbalm.