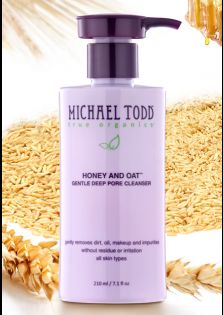 I have dry-normal, sensitive skin. I hoped this really work to remove my water-resistant, but not waterproof makeup and not leave my skin dehydrated. . This didn't dehydrate my skin and lathers up VERY well - you just need a tiny amount when you wash your face. . What I disliked about this cleanser is that it didn't work to remove my makeup, although it says i should. When I tried it out at first, it looked like all of my makeup was gone. I even used some of the Michael Todd's cranberry toner on a pad and checked if there would be any makeup left on the pad - there wasn't any. However, after using only this cleanser for about 3 weeks to remove the same makeup (a.k.a. "my everyday makeup routine") my skin suddenly began breaking out a lot. Eventually, I saw that I had a lot of clogged pores and acne. My skin got better only when I began using my regular facial scrub (I had switched it out for Michael Todd's Charcoal Scrub), squeezed out the blackheads, began using one of my older 2-in-1-makeup-remover-facial-cleansers and began using Michael Todd's Blue-Green Algae Toner (love it!) again. Verdict: this doesn't remove makeup well. Sourse: all of the clogged pores after I tried to use this instead of my regular cleanser. That you don't see the makeup doesn't mean it's not there. . There are other cheaper and more effective products out - this cleanser isn't something I feel I need. It doesn't fill any function more than being something I can wash my face with in the morning, and for that I like my Nivea Gentle Foam Cleanser better - it's more gentle than the Honey and Oat Cleanser and leaves my skin with no residue.

This cleanser is aloe-based and I love it because it smells nicer and is easier to use and rinse off without the slimy feeling of glycerin-based washes. My skin looked brighter and my blemishes were less red immediately after the first use! It's extremely mild and doesn't dry me out or make me oily. This cleanser also fully removes my (non-waterproof) eye make-up thoroughly with no smudges or residue, which is nice on the days when I forget to take it off before showering. It works well and helps to balance my skin and I've never found another cleanser that is so mild yet thoroughly cleanses my face with no drying effects. I'm not sure if it's a necessary part of the Michael Todd system but it works out a little cheaper per ounce than the Murad/Korres/Boscia cleansers I've used in the past so I did choose to continue using it. :)

I'd heard great things about Michael Todd products, and I'd seen that they were having a 25% off sale, so I decided to order a few things. I wanted to order a face mask after hearing fabulous things about it, but I decided to order a few other things as well. I have dry, sensitive skin, that is usually pretty clear with the exception of the occasional blemish, but for the past few months I'd been breaking out on my cheeks and got little bumps all over my forehead, and everything I was using was making it worse. So I ordered this cleanser because it is said to be gentle, and I can vouch for that! It's so gentle that I sometimes use it to take my eye makeup off if I'm feeling lazy, and it doesn't burn or sting. I usually moisturize after washing my face and if I forget, my skin is painfully dry, but not with this product! I forgot moisturizer, and I couldn't even tell! My skin still felt great. This product left my skin feeling so clean and refreshed. After three uses, my skin was back to being completely clear again, so much so that my family and friends even asked me what I'd been using. If you have sensitive, dry skin like me, I highly recommend this product! It is so gentle and it has completely cleared my skin!

I really disliked this product from the get-go. As someone who was used to buying drugstore cleansers, this was a significantly bigger investment. I accepted the increased in price because I thought I would be getting a superior product but this wasn't the case. When it first arrived in the mail, the packaging had exploded all over the place, despite being wrapped in plastic wrap. I left quite a mess on the other products I ordered too. So far, I wasn't impressed. When I first began using it, I had high hopes - these were quickly dashed. Other users reported having dry skin, and while I didn't run into this problem (I have combination, sensitive, clog-prone skin), what really bothered me was that there always seemed to be some sort of residue left on my skin when I rinsed it off!! Others reported feeling that it left their skin squeeky clean, but I there's a difference between squeeky clean and the feeling that new skin is being revealed (hint: the latter is better). I tried washing my face with one pump of soap, and washing it twice (some people say that this helps cleanse their faces better) and both methods did not succeed in removing that feeling. The only thing I like about this cleanser is that it doesn't seem to get used up quickly! I've had my bottle for maybe around 2-3 months, and I still have a good 60% of it left (this is also post explosion from shipping). You only need a bit for it to lather up really well. Overall, I would not recommend this product to anyone since it did not perform up to my expectations.

I love Michael Todd True Organics, but this product is not for me. It's meant for someone with more oily skin. My skin felt very tight after using this. I much prefer the Skin Defender cleanser from their line which makes my skin feel amazing.

I purchased this cleanser after a lot of research into the brand and ingredients. I was looking for a cleanser that was gentle and simple since I've started using some glycolic acid based creams. My skin is pretty combination, as I get extremely oily on my cheeks and temples, while my forehead is relatively dry. However, this cleanser completely dries my skin out! I load up on my moisturizer, but my skin still feels really tight. The cleanser itself does a good job at cleansing, the packaging is good (though I can't figure out how to twist the pump close) and the smell is nice. But I won't be repurchasing because I find it way too drying, and that isn't usually the case for most cleansers I use. Edit!!!: I've upped my rating to 4 lippies. I've found that my skin has gotten used to the cleanser and now, my moisturizer does a good job of counteracting the dryness. Moreover, this cleanser is great for taking off makeup! I massage it into my skin for a minute, rinse, and then wash my face again just to make sure I've gotten everything off. I also use it to clean off my beauty blender. I also just realized how economical the cleanser is; you get quite a bit for 22 dollars (the sale price). Overall, I may not repurchase this because I feel like I can get a better cleanser more conveniently. But still, give this a go! It seems like a lovely brand, and it is quite the lovely cleanser.

I have eczema so my skin is both dry and sensitive. My skin cannot handle a lot of cleansers and moisturizers since they are filled with chemicals, so they irritate my skin. But I was watching a video by Gossmakeupartist and he recommended this product. He said that this product was organic, so I became curious and found the official website. After looking through the website, I decided on this cleaner and two other items (Cranberry and Antiox Toner & Citrus Cream Moisturizer). This cleanser manages to wash off all my makeup, but it does not make my skin dry (nor does it cause it to burn and turn red which has always been a problem for me). It has a nice fragrance and a little goes a long way. You don't need a lot of product, I use half a pump and it's enough to take care of my entire face. I love this product and I definitely will be buying it again!

The first few times I tried this cleanser, my skin felt so dry and parched, I couldn't understand how this was being touted as "gentle." However, after maybe about 4-5 times, my skin got used it. The liquidy ivory/beige colored cleanser doesn't create fluffy, luxurious suds, but more of a thin lather. When I rinse it off, my skin feels squeaky clean (literally I can hear it squeak like clean Tupperware), but still feels incredible soft. It's supposed to remove makeup as well (and reviews on the internet indicate even waterproof mascara washed off), but for me, I always have leftover mascara/eyeliner around the eyes. It hasn't caused breakouts, but at the same time, it hasn't prevented breakouts either. It comes in a pump which you can twist to open and close, but unfortunately, when I first received the bottle, not only would the pump not lock, but the cleanser leaked out of the "neck" when in the "open" position. I've tried TONS of other cleansers (Cerave, Shiseido, Neutrogena, Philosophy, Sumaxin, F.A.B.), and in my opinion, this isn't anything special. Maybe my expectations were too high based on reviews online, but it's just meh for me. I won't be purchasing again.