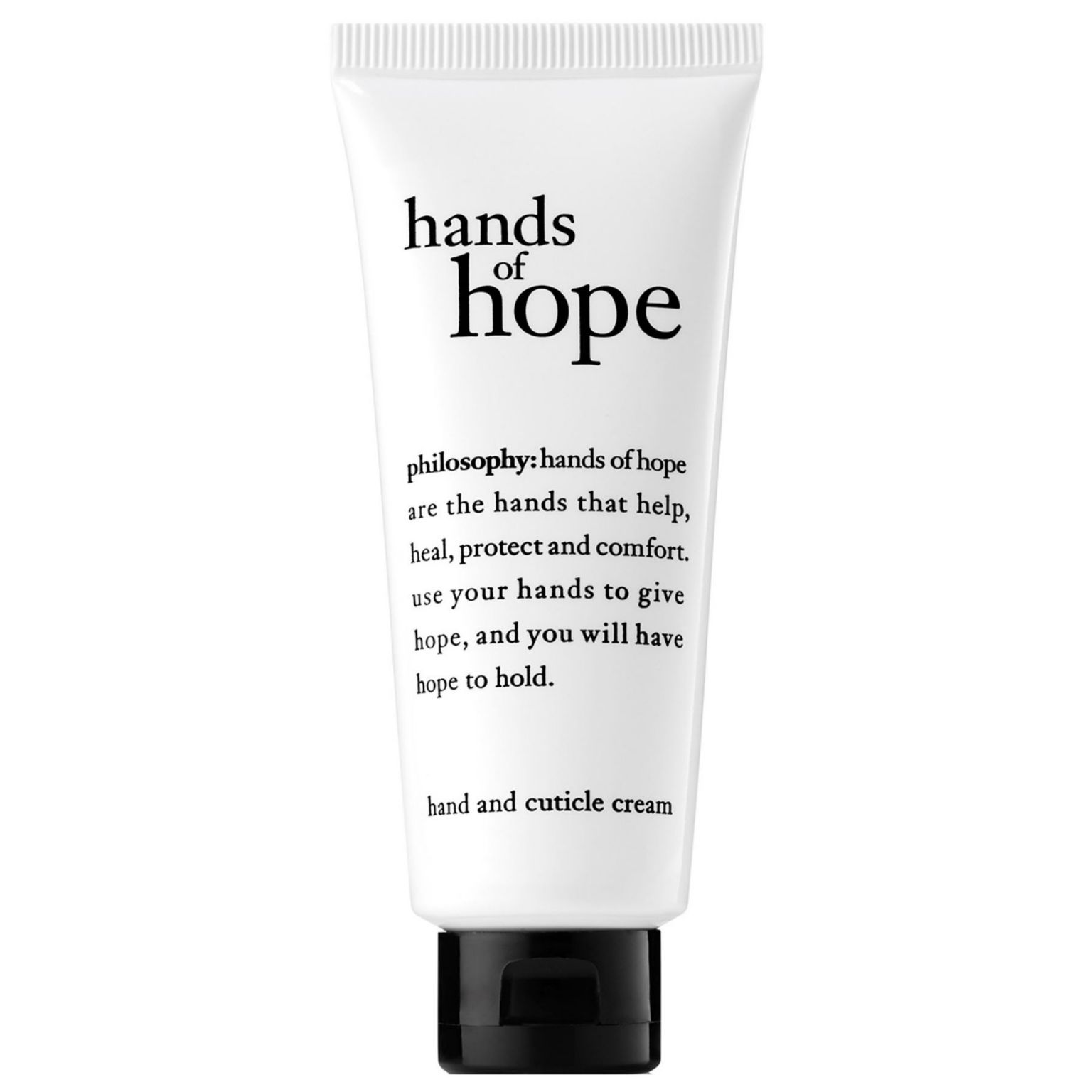 Sorry to be the party pooper, but I definitely hate this hand cream. It balls up to little crumbs, every time I apply! Checked the ingredients and silica/dimethicone is quite high and might be the reason.

Nice thick hand and cuticle cream - not suitable for other parts of the body - left a weird residue on my legs for example. Smells really odd.

I wash my hands probably too frequently and I often get dehydrated skin. Previously, I was using Sukin hand/cuticle cream, which was alright, not super moisturising and had to be applied quite often, but it didn't leave my hands feeling greasy (which is a must for me, as I work with clothing). Certainly cheaper than the Philosophy. But when I walked through the skincare/cosmetics department one day to quickly try any hand cream to soothe my extremely dry hands (to the point where there was redness and it hurt), I used the Hands of Hope tester, and a few minutes later, bought a full size version. I've been using it for about a week now and it has been a godsend. By far my favourite hand cream I've ever used. Pros: Non-greasy, thick, creamy formula, easily/quickly absorbed. Leaves skin feeling soft and supple. Does not have to be applied very frequently. Cons: Smells like play-doh (but the smell goes away as it soaks into your skin). If you want the smaller, more travel-friendly tube, it's twice the price per mL.

This is great. It's the first hand lotion I've found that is thick and very hydrating without being greasy. I can type on my computer within about 15 seconds of application. $20/four ounces is expensive, but the bottle lasts a long time.

Wonderful product. I have to wash my hands often in my job and my hands are constantly dry. Therefore, I'm always on the lookout for the perfect, unicorn-like product: A hand cream that is rich, nourishing, yet non greasy, so I won't leave fingerprints all over the place, not too much glycerin so it doesn't turn into a slippery mess when it comes into contact with water, that has no offensive smell, and I am well aware that this search is an almost impossible quest. That said, Hands of Hope comes pretty close and it's my go to during the day. At night I still use L'Occitane's Shea Butter hand cream because it's richer and greasiness is less of an issue. Nice tube packaging, I will continue to purchase this as long as they make it.

I'd been a Neutrogena hand creme junkie for years. During the winter, it's the only thing that would keep my hands from being scaly and gross. The only thing is that it's very heavy and tends to leave greasy prints everywhere I've touched--phone, keyboard--just kinda icky. Not to mention, if I use a hand sanitizer, it would dissolve the hand creme so it wouldn't do much good. I tried Philosophy's Hands of Hope when I got a sample with another purchase. The sample size was nearly 1/2 ounce--which is pretty good sample-wise....most samples are much much smaller. So it gave me time to try for a while before committing to a full-size tube. This stuff is amazing! It feels a bit heavy like Neutrogena, but absorbs nicely instead of sitting on the skin all greasy and gross. I think it holds up better too to sanitizers...I've used the gels and straight alcohol and neither have made my hands feel dry or taken that 'film' off that the hand creme leaves. That's pretty impressive! I don't think the price is all that bad... Yeah you can get a whole bottle of lotion and slather that on all day, and many cost less than this--but for actual 'hand creme' that lasts, and works well, the price is reasonable. That Neutrogena stuff I was using isn't all that cheap. I think it was like $8 for a 2 ounce tube...so at $20 for 4 ounces, Philosophy isn't all that much pricier--plus you don't have to deal with leaving greasy fingerprints all over the place, or having your hand creme come off everytime you wash your hands. Oh plus, I like Philosophy better for my cuticles than Neutrogena. Neutrogena was good at protecting my hands from cold weather, but Philosophy actually moisturizes my cuticles and hands so they're plump and nice...Neutrogena is more of a protective creme, doesn't really do anything 'cosmetic' to your skin, IMHO. So, I'm switching to Philosophy now. I love this stuff and am not going back to Neutrogena. This is a much better product...It's kinda like switching from Crisco to an actual moisturizer.lol Philosophy definitely has it over Neutrogena...hands down.lol

I am a bit of a hand cream addict and Hands of Hope by Philosophy has to be one of my favourites. It has a formula that isn't too light but definitely isn't particularly creamy. As a result, it absorbs super quickly - so while there is a bit of greasiness for the first few minutes (as is the way with any hand cream), it is completely gone really quickly. Despite it's consistency, I've found that it is ridiculously moisturising and offers the same benefits as it's creamier rivals (such as L'Occitane). I use it every night and end up having the softest hands in the morning. It has absolutely no smell whatsoever - which is good and bad I suppose. I would prefer my hand creams to have some sort of scent but I definitely prefer no smell over those that are too strong and over-powering. Lastly, when it comes to packaging, it comes in a small tube which I personally like - it fits well in my handbag so I can use it on the go. It has the traditional Philosophy packaging - very simplistic with the writing and no colours (which again, I quite like). Overall, I adore this product and unless someone introduces me to the same product with a light scent, I shall be sticking with it in the future. Also for anyone looking out for it in Australia, it sells for $12 (good value since it lasts ages, even with daily use). I found mine in Mecca Maxima (Cosmetica) but I'm fairly certain it also sells in Myer and David Jones. Good Luck!

Oh my goodness. This hand cream is a godsend. I originally came across it when United Airlines included it along with a few other Philosophy products in a small kit given to passengers in first/business class. It is SO moisturizing and soothing. At the same time it never feels sticky and absorbs straight away. Im a big nailbiter and it stops me from nibbling by moisturizing my cuticles and making my fingers and hands feel incredibly soft. Ive gone through 8 of the tiny tubes! Ive even asked passengers on planes who leave their kits if i can take theirs. Its that good. Just wish it came in a larger size!

This is without a doubt the BEST hand cream I have ever used. I am a nurse and my hands are absolutely trashed by the end of the day from hand-washing. I won't use a hand cream during the day as it makes my hands too slippery and/or greasy. I have tried them all and nothing compares to this one. I use it only at night before I go to bed and always awake with soft hands and cuticles. When I first tried it, my hands were a mess. It took about 3 days to repair them so give it a bit of time if your hands are extremely dry. It is expensive, but only one application a night keeps my hands soft and smooth. It must be quite popular now because I can never find it in stock at Sephora, Ulta or other stores that carry Philosophy skin care. I order it on line and always have a back-up.. :)

I operate camera equipment and needed a non greasy hand product for the winter. My colleague suggested this and.... Omg! It's love. This stuff is awesome. I love that it had just a faint, light scent to it. It absorbs well and no fingerprints everywhere.