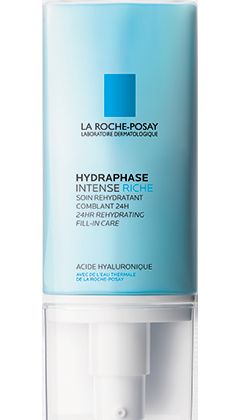 I love the short list of ingredients in this effective, lightweight moisturizer. It's unscented, which I prefer (I love perfume, but not on my face). The pump bottle keeps the product clean and fresh. It's not quite moisturizing enough in mid-winter when the heat is blasting and the air is super dry. But in warmer months it's perfect. I found that it's not suitable for my eye area, as it burns a little and really stings if it gets in my eyes. But otherwise, it's a nicely simple moisturizer that doesn't make me break out. I would say it's comparable to CeraVe Moisturizing Cream but has simpler ingredients and is a little richer/creamier. I can feel the shea butter in the La Roche-Posay cream, which my skin loves.

I think I got this in a set... Anyways. I have sensitive, normal-dry skin. I didn't like this mainly because of two things: 1) fragrance - it's not good in skin care 2) it's supposed to be intensely hydrating, but it's not. It comes out as a thin lotion tat spreads easily and worked well under all of the makeup I use, but I didn't enjoy the fragrance, as it seemed to be slightly irritating to my skin - my face was a little more pink during the time I used this, and also it sometimes felt like it was sweating a little, which is usually a sign of irritation when it's not hot or humid. I usually use the same cream for day and night, and especially in the morning I could see that I could definitely benefit from having something more hydrating. I enjoy other creams from LRP much more than this one.

Hydraphase rich comes in a blue upside down bottle, the cream is white and lightly scented. But because LRP caters to sensitive skin, why would you add fragrance to skincare? My skin is dry to normal but eczema sensitive, this did not bother my skin at all though. I used it all up but if I’m honest I can’t really form an opinion on this cream, for me it’s just a generic moisturizer. Not bad but nothing great either so I personally would not repurchase this again.

Don't know what it is with me and La Roche-Posay moisturizers, but they are never quite what I want them to be. I really like a lot of LRP products (Redermic R, the Effaclar Duo treatment, Effaclar cream cleanser and the Effaclar H moisturizer especially) but I have dehydrated combination skin with hormonal acne, and I live in a cold, dry climate. In the winter I need heavy-duty moisturizers, the Effaclar H doesn't cut it, I go through way too much of it. While Hydraphase Intense Riche is a nice, no-fuss moisturizer, definitely richer than Effaclar H, it still isn't moisturizing enough for my skin in the dead of winter. I end up having to use four or five pumps, tearing through one tube in just a few weeks, and it still isn't enough. I think I would like this a lot more in the spring or summer, which is how I feel about most of the La Roche-Posay moisturizers I've tried (Hydraphase Intense Riche, Toleriane Riche, Hydreane Riche, Effaclar H). Out of the ones that did at least kind of work for my skin (Nutritic Intense Riche broke me out), I think this is the one that is the closest to a decent winter moisturizer for me. Good things about it: I haven't developed any dry flaky patches, so it does hydrate well, just not quite enough right now. It doesn't seem to irritate my skin at all or cause acne. It feels nice on the skin, although it's rich enough that it probably wouldn't be my first choice for a daytime moisturizer - it leaves a slight greasy cast for a while. I don't mind the fragrance at all. Less good things: I go through a lot of it, which is my experience with most La Roche-Posay moisturizers. The Eucerin 5% Urea moisturizer (discontinued, sadly) was my staple moisturizer pretty much year-round, but especially in the winter, and one tube of that lasted me much longer than any of the LRP ones do, for some reason. They are nice, but I end up using a lot, stressing out a little about keeping up with getting new tubes, and they never feel quite moisturizing enough.

Roche Posay Hydraphase Intense Riche moisturizer is a life-saver for me. I have had an issue with my skin flaking (esp on my forehead) regardless of how much facial moisturizer (and face oil) I apply throughout the day and before bed - this has been going on for several years during the winter months. I tried a variety of moisturizers that are made for dry skin but NOTHING worked. Until I tried this! I applied it before bed the first time and the next morning before applying my makeup and voila, no flakiness at all that day! I apply it at night and in morning to ensure my skin is getting adequate moisture to take it through the day, but some ppl may be ok with just applying at night and using an SPF moisturizer in the morning. Pump design is great, no dirty/oily hands going into a pot, and at under $30 it's not that expensive. This has been a time-saver and beauty treasure for me. Hope it helps others too!

Nearly finished with this product, and on the whole it's been a delightful experience. The packaging is excellent, with a dispenser pump and translucent, intentionally inverted container so product doesn't get stuck in nooks and crevices, and you feel like you are getting your money's worth from the container :) And the product itself ... let's just say it works well. One to two pumps provides literally all-day moisture. Every time I use this, my skin is literally 'dewy' at the end of the day. The prime front-of-package claim is that it provides intensive 24-hour rehydrating care and is 'pro-radiance' ... and it works, folks. So if that is what you are looking for, give it a try. The one thing that comes to mind on this one, though ... and maybe it's a bit biased as the product is paraben-free and the brand is tried and tested ... is that it doesn't rank very high on the Environmental Working Group's Skin-Deep cosmetics database for the product fragrance. http://www.ewg.org/skindeep/ check that out people ... So whereas the product is in no uncertain terms 'safe,' the fragrance probably isn't that great for you. That said, in terms of effectiveness, it's good. Buy it and try it :)

The fragrance irritates my eye area. I wish La Roche Posay would stop using fragrance since their line is supposedly for sensitive skin.

I have a very dry skin, so this cream here was a true saviour. I absolutely love how lightweight and yet soothing it feels on my skin. Never sticky, overly thick or uncomfortable. This moisturiser is particularly good if you have a normal to dry or dry skin. Other skin types might find this product a bit too dewy and rich. I love wearing it day and night; I find that make-up looks and lasts really well whenever I use it, so I can't think of a single negative thing! Two pumps of this are more than enough to cover your entire face and a single tube should last at least couple of months. If you want a detailed review of this product, feel free to check the link below. Hope it helps! http://www.partyparrotblog.com/#!Current-Skincare-Routine-Favorites/cmbz/56cc93620cf26bd1d3eb941e

This moisturizer was my HG, but it's not anymore. I don't know if the product itself changed (highly doubt it), or my skin doesn't like it anymore. I have dry, sensitive skin and while it does a great job at moisturizing my skin, I feel it is clogging my pores a bit and I got some bumps on my chin and cheeks (not pimples, but clogged pores with white stuff in them. Yuck!). What I hate the most about this product is its waxy feel on my face. It's as if I am wearing a mask, it sits on top of my skin, feeling... well, waxy. What I love the most about this product is the packaging. I love the pump and the fact that no air gets inside the product. When the cream is almost over and the pump doesn't pump out any product, I just cut the tube and still have a few day's use. I repurchased this once, but I won't repurchase again. I am currently trying out Bioderma Sensibio AR moisturizer, which got 5 stars on Beautypedia.

I bought this moisturizer at Shoppers Drug Mart on a recommendation from the beauty specialist there. My regular go-to, the LRP Hydreane Riche, was out of stock. Although it carried a more hefty price tag than the Hydreane Riche, I decided to try it out. The one big difference between the Hydreane Riche and this moisturizer is the packaging. The pump on this moisturizer is much nicer, and one pump dispenses the perfect amount of product for my entire face. However, the formulation of this product is mediocre for the $42 CAD you pay for it. It claims to provide 24-hour rehydrating care for dry skin as well as pro-radiance. The moisture for me lasts about 8 hours, so I have to reapply at night. The &quot;radiance&quot; just gives me an oily sheen that I have to dab off with a tissue - and I have dry skin to begin with! This moisturizer is paraben-free as well and has a mild soothing effect on my sensitive skin. For the price, this moisturizer is not worth it. It has great packaging and some good moisture benefits, but it is not long-lasting, does not work as a good base for makeup like the Hydreane Riche, and leaves skin with an oily finish. I would only recommend this product to someone with extreme dryness for daytime.