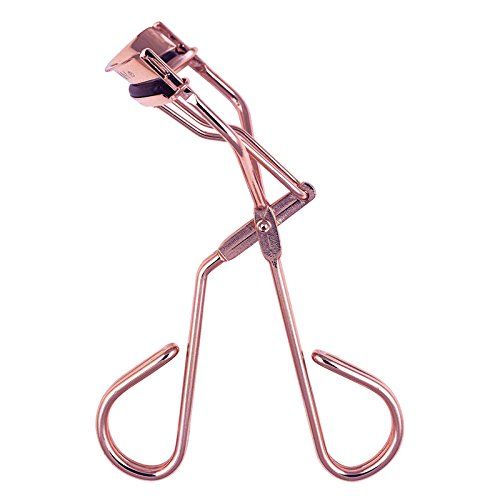 I wouldn't say it's better than most drugstore eyelash curlers but I think I bought it because I'm a sucker for rose gold. It never gives me an amazing curl or a consistent curl for both eyes. Tends to pull eyelash uncomfortably as well. It was a product bought and then rarely used because it brought me no joy in fact, it was slightly unpleasant. I wonder if it's just not suited for my eye shape. I have smaller eyes medium sized lashes and my eyes are slightly deep-set.

I've bought and used 2 of the prolash curlers. I was actually debating between the prolash or the ProMaster but ended up buying this one. I have Asian eyes and they are almond like, but for some reason, this lash curler actually works for me. I've always had the issue where the curlers were too straight and I could never reach the sides of my lashes and the flatter it is, it wouldn't work so I needed come curvature to it. This one seemed to work well for my eyes. I bought a second one as the first one started to peel where it touches the lids. Not sure why.. could be because occasionally I clean it with alcohol swabs and it rubs off the paint? Either way, I have not accidentally crimped my eyelids or anything like that and it gives me a nice curl. The packaging comes with extra pads so you can replace them easily which is nice. Too bad you can't buy the pads separately as buying a new curler every time you're done using the pads seems such a waste. Would repurchase though.

Bought this on emilynoel83's recommendation. It's rose gold, came in a beautiful set with a rose gold pouch and tweezers that work well. However, I don't find the lash curler to give me an easy curl that stands after a few crimps. The curl also doesn't last as long when I use my L'Oreal Lash Paradise mascara which I have used with my Shiseido curler, which I find to be more effective. The handle does feel extremely sturdy because it has 2 of the metal bar handle hoops attached together that makes the grip feel more secure, and that I'm not going to have it slip while holding it. xD I wish it worked but besides being nice to look at, Shiseido still curls my lashes better. Perhaps if you have thicker lashes it will work better for you. If you have thin and sparse lashes, I would say pass on this.

You had me at rose gold. My Shu Uemura lash curler finally died and I wanted to get something new. This curler is make for round and almond eyes. I feel like don't need to use a lot of pressure using this lash curler. Great padding too. Love!

Amazing and it works with my lighter as it to get better holding up on lashes. My boyfriend got it for me and I was surprised that it worked and its light colored makes it very pretty cool to have it for travel and comes with 3 replacement too.

I really like this eyelash curler!!! Used my Shi for years and wanted to replace, but couldn't handle the new black color. I found it too hard to see my lashes. Tried the Kevyn Aucoin because I heard so many fab reviews, but I found nothing special about it. This one feels great! Has a lot of substance and you can tell it is well made. There is more of a &quot;bounce&quot; to it when crimping which I feel is easier on the lashes. Nothing but waterproof mascara will hold my curl so, yes I curl after mascara application and this curler is easier on the lashes. Haven't experienced any breakage. Extremely happy with this quality tool ;)

I bought this to replace my MAC curler. It gives a longer lasting curl then the MAC. My favorite part is that it comes with THREE replacement pads. Kudos Tweezerman.

Pretty good curler but doesn't work as well as the Shu, and costs more, so won't be buying again. Like the hvy weight and sturdy feel of it though

I like this. I have long lashes but on one eye my top lashes grow down at the corner. This eyelash curler curls them up nicely. This curler also gives my remaing lashes a nice curl upwards and it is pretty fast too! The curler fits my large eyes and do not pinch. I also like that it comes with extra pads and the box it comes in keeps my curlers clean in my makeup box. The rose gold colour is very pretty also!

I have reeeally deep-set eyes. This is the first full-sized curler that I could fit and make work well (I've tried Shu Umera's, Lancome's, Sephora's, Tarte's, and more I don't remember...), and it's so much better than my previous awkward mini. Quick to use, and the curl lasts well for me - I once did it before bed to practice, and it was still there when I woke up. There could be some improvements though. I love how there's 3 extra pads, but they're not the best quality I've seen - good enough, but could be sturdier and a touch better textured. I'd also love if it was just a bit less wide, .5-1cm or so, so it could actually go around my eye all the way and get a more intense curl. Lastly, the pure black color of the pads makes it impossible to see my (also black) eyelashes - it'd be great if there was a bright, colored option that would contrast. Still, it works pretty well, that's saying a lot when nothing else had so far* and it even comes with Tweezerman's standard lifetime of sharpening! Haha. *(Concealers are such a pain too, especially after the passing of Tarte's Dark Circle Defense. I begrudgingly stick with Bobbi Brown's.)