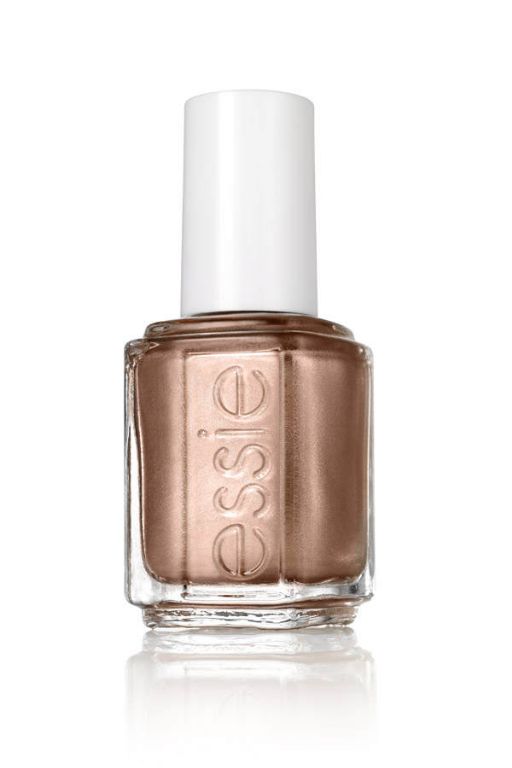 Registered to rate. Essie is my favorite brand, but something is wrong with this one. I’ve been using nail polish regularly for decades (senior citizen now) and have never come across such a terrible product. It reminds me of an extremely thick version of model car paints my brother would use. The brush is so narrow and stiff, it took three strokes for my narrowest pinky nail, five to six on my thumbs. That makes the streaking worse, and there’s no luck in trying to go over a streaked area, it just pulls up and clumps. Removed it and gave a second try, but still bad. Not worth the frustration. Too bad, I did like the color.

A shiny gold polish. It has a bit of a metallic finish and because of that it did go on a little streaky but still opaque. For me this is a nice fall color for the nails

Save your money. I have never seen a nail polish that is more difficult to apply. A streaky mess that is not worth the effort. Even the color payoff is disappointing. You read a lot of raves about this polish, but I don't think a word of it is deserved. I am very disappointed.

This is one of those colour that I can't help but keep looking at! Such a pretty rose gold/coppers, was never into metallics but this polish makes me want to buy a couple more. I don't think this colour to be streaky like people say, it looks kind of streaky when you're applying it meshes together when it dries, almost like a foil. The only problem I have is that this polish can really emphasize any bumps/ridges/uneveness you have on your nail but I think added like glossy top coat like Seche Veit really helps to minimize that.

Gorgeous color! I'm a big fan of metallic nails! I already often wear a gold from Zoya and wanted to try a rose gold! So glad I did! It is not as beautiful on my warm, tan skintone as gold is, but it still looks pretty damn good! Makes my nails look longer than they actually are too. The formula isn't the best. It doesn't seem to perform well over my Essie base coat - the color pills up weirdly, so I need to use this on bare nails. And I've never been a fan of the applicator with Essie nail polishes. Overall though, I would recommend this as it is a beautiful high shine metal color that is very unique and wearable 365 days a year!

I got my first bottle of this from my grandma, who was so impressed with how it dries basically instantly. It does chip rather quickly, but I just keep it in my purse for touch-ups--it's very thin, so you aren't piling it on and it never gets goopy. Some people probably took a lippie off because of staying power, but this dries so fast with no spray or top coat that I can't complain. You probably can add a long-wear topcoat if you want. Also, this goes with anything! It's shiny like a brand new penny, a rose gold, true pure metallic. I try other kinds, but they always get smudged before drying. My HG!

Bought this thinking it would be a pretty copper, I haven't worn it since. It made my nails look orange instead of bronze or gold with my skintone. I have used it for my tips with a nude sheer, and that looked fine.

Good for an experimenter like myself, but simply too much effort required in the making, tbh. While this polish isn't totally terrible, the colour is just short of the mark (it isn't a rose gold, and it isn't a copper, either - it won't make up its mind) and the formula is also sort of annoying. I bought this as a rose gold, but ultimately it isn't anything like that, due to the high levels of yellow gold/grey/copper pigment in the bottle. It also dries kind of streaky, as if you've painted your nails and then rubbed your mitts through a foundation brush. Yeah. Best I could come up with. But still, I do think that - maybe - this polish would be good for either stamping, dotting or, as another user said, topped with a glitter or a flakie. If you're hoping for a rose gold, though, don't bother. It's disappointing AF in that regard and really not worth the (not exactly small) price it sells for. I matched it to the bezel of my Michael Kors watch and the watch was way, way, pinker. On the whole, this is probably not a polish to add to your collection.

Yes, on its own it is too warm for many skin tones, but top it with a gold glitter or flake and it is amazing. I have fair , cool skin and this combo is my go-to over the holidays. It's less harsh or garish than red and gold, and it's more unique.

I would not buy again. Gold at first, then it oxidized and turned into a very pretty rose gold. The sun helps with the color. I love the color, but I was very disappointed with the formula. It was thick and streaky. It left big empty spaces and was overall a nightmare to apply. It chipped quickly, and looked messy instantly. I would recommend looking somewhere else for a rose gold polish.