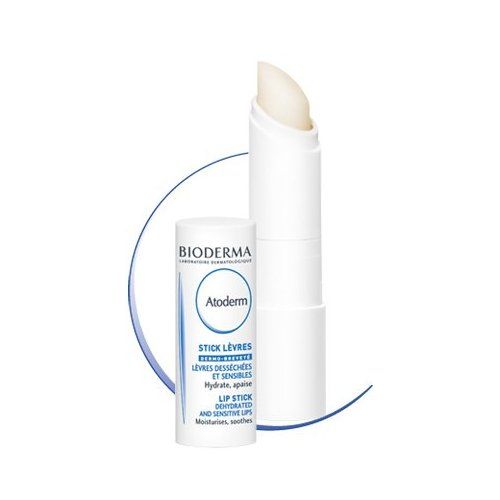 Fairly long lasting for a stick balm. Moisturizes nicely, wouldn't work for extreme chapped lips but should be fine for normal dryness. Doesn't have too much shine so my husband will also use it, he hates shiny overly slick balms that he can &quot;feel&quot;. There is a mild scent but it's not overpowering and I don't notice it much. Packaging is nice and simple, easy to apply on the go which is the main reason I like to have one of these around as opposed to something in a jar. Would repurchase.

I seem to be the odd one of these reviews but I actually found this lip balm moisturizing compared to other ones that I've tried. I don't mind the scent either but that's a personal thing. I've been using different kinds of lip balms but most have left my lips more chapped or else my lip skin is peeling or else a layer that never gets absorbed. This one didn't do that and I have sensitive skin too! I bought mine on a dual pack from Rexall but I believe you can buy them in other stores like Shoppers or London Drugs. It comes in exactly what the picture shows, a spin up tube stick that's white. I found the texture to be smooth upon application and it didn't make my lips dry. I would consider repurchasing it again, although it is a bit more expensive than other brands out there, if it works, it works. I am open to trying other brands as well if they work. I personally would recommend this if you are not sensitive to scents (although I don't find the scent that heavy in the first place).

I love Bioderma but they have totally cheapened what could have been a solid product with this weird fake fruity fragrance.

Bioderma Atoderm Stick Levres keeps my lips nice and moisturized overnight unlike some lip balms made out of mostly beeswax, sunflower seed oil, and hope, but holy damn does it taste foul. I've gone through anywhere from six to twelve tubes of Burt's Bees from since school through early college and they did absolutely nothing for me. I'm still pretty salty about beeswax based lip balms, so I went out of my way to find something different that uses a different occlusive base altogether. The formula is pretty solid with mainly mineral oil and paraffin sealing in your natural moisture as well as moisture added via its inclusion of shea butter and caprylic/capric triglyceride. I was pleasantly surprised by how well it prevented my lips from every getting chapped; however... There's a noticeable and even pleasant raspberry smell when you open the tube. That in and of itself isn't a deal breaker but it just tastes so bad. I get to taste that smell on my lips if I even dare to sip on some water before I go to bed. In fact, I only put it on right before going to bed because I despise how it tastes and couldn't abide by it during the day. If you want something similar but better and not awful tasting, try Uriage Stick Levres, it's even more moisturizing (and ironically for me, contains beeswax) while it does not have horrid added fragrances that you can totally taste the entire time it's on your mouth.

Hi people, lip balm addict coolkatz here. I bought this lip balm cause i heard it was really good, along with my other new lip balm, burt's bee's beeswax lip balm. I heard it was fantastic! So i got it from the internet for 12 dollars, aka 12000원 in Korean money, won. really pricey for a lip balm, but here goes.. When you open the lip balm from it's packaging, you can see that the size is that exact size of my index finger. Now, when you open it, you can smell the raspberry scent that is just delicious! Then, when you wear it on your lips, it doesn't make your lips feel &quot;trapped&quot; and &quot;claustrophobic&quot;. It doesn't feel like oily, greasy and sticky, like vaseline..if you know what i mean.. It's what I seriously hate about most lip balms.(yes, i mean you, Nivea) And it's not too mushy and soft likethe baby lips lip balms. That's why i'm pretty sure this lip balm WILL last long enough. Overall review: I love this lip balm!! It smells so good, and it doesn't make my lips claustrophobic XD! This lip balm has a simple design on the outside. Which i like.. a lot. The lip balm has a long life span too. I think that this lip balm is very good for kissing.The only thing is that i wish it used a little more natural ingredients. by the way, what i mean by natural ingredients is that it should have ingredients names that i can recognize and pronounce. XD Nice lip balm Bioderma! The lip balm wins!! :D

I bought this on Amazon for 10.33 for 3 sticks. It was two sticks and then the third is a &quot;gift&quot;. Not cheap, but not expensive. I just bought it on a whim, you know how it goes XD. The moment I put it on the smell was exactly like a red raspberry LipSmacker I used to own as a kid. I'm not sure if that's a good or bad, but I liked it. There's no actual flavor to it, so it just tastes like Vaseline. I would guess it really tastes like mineral oil as that's the main ingredient, but I've never actually tasted mineral oil out right, but for sure the lip balm tastes like Vaseline to me. The container is white with a white cap, blue and black print, nothing fancy. Made in France. The tube itself that holds the lip balm inside is slanted, along with the lipbalm. It's interesting as I haven't seen slanted tubes too often. It is also hypoallergenic, according to the container. The feel of the lipbalm is light, but still gives you that sensation of being there so you knows its doing its job. I wouldn't say greasy and definitely less of the greasiness than Vaseline. The layer you apply is quite thin. Even if you go over you lips a bunch of times, it never really gets that overly heavy feeling like you've glopped it on. However, it does become a bit slicker if you apply multiple layers. It goes on legit clear, does not leave a white cast to your lips. However, it also doesn't give you the plumpness or smoothness of a gloss. Overall, I really like it! I find myself reaching for it a lot because it smells great and locks in the moisture while doing a little bit of hydrating. I have dry lips, but they don't crack that often. However, they do tend to peel a fair amount and this has really taken care of the peeling situation. I find my lips a bit smoother now that I've been using it and it really knocks my other balms out of the running, since its almost like a daytime Vaseline without the mess and feel of it. I've tried my fair amount of lip blams, like any girl on MUA, and this worked for my dry peeling lips. Also, I'm one of those girls that did not like the EOS balms because they weren't hydrating enough for me. So if you're looking for a little more moisture this might be the solution. I would definitely purchase this again!

SkinNormal, Medium, Not Sure

I love this lip balm! It has a wonderful fruity smell, it's moisturizes my lips and stays on for an impressive amount of time! I find that the price is amazing (just as much as a Baby Lips balm in Canada)! I don't really understand why others are giving it a bad review! I can understand why some wouldn't like the fact that it doesn't fully absorb right away but I love that because it prevents my lips from drying out for much much much longer! The packaging is nice, nothing too special! It twists up and back down! Overall I absolutely love this product!!!

I have 2 lip balms: Bioderma and Apivita. I prefer Bioderma, it moistens my lips more than Apivita, and I also like the fruity smell. When I use it, I have no more dry lips, and I must say my lips are very dry. THe downsize is that Bioderma lip balm is more expensive than Apivita, but I prefer to pay more and have better results. http://beautybellenotes.blogspot.ro/

I got this on sale when I was in Paris, so it was pretty cheap. Good thing it was cheap, because I hate everything about it. If you look at the ingredients, the first listed is mineral oil. Mineral oil is too greasy for the lips therefore it slips and slides. This product never gets absorbed, instead, it just lays on the top of the lips. It does absolutely nothing to care for the lips. The packaging is also terrible as you can't retract the stick.

I do have quite sensitive skin in general, my lips are as well plus dry, especially in winter. This is a usual lip treatment, it does not really soak in, it stays on the top of the lips and prevents them from drying out. Its enough to put this on just a couple of times per day (3 times maybe) and the lips feel good and comfortable. Also a good base for a lipstick or even lip gloss. Its pretty good, but the price is quite high, I think there are more balms out there, that do the same and are cheaper and easier to get (here you can purchase it only in some pharmacies).