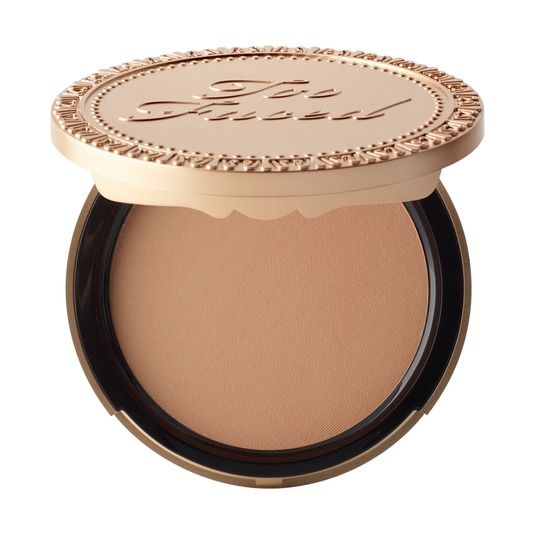 I like this bronzer as well, as some others mentioned it's very buildable. And fair skin tones can use it. Not too orange, and the price is "okay" for the quality that you get..

Love this bronzer. It's buildable and just the right shade for my fair skin - not too dark and not orange. It also lasted a very long time, so it's good value for the money. Will definitely repurchase.

Love this bronzer for the summer time. Gives a super nice bronzer look without being orange. I also love using this bronzer as an eyeshadow trainstion shade! I really recommend this I’ve had it for over a year and haven’t hit pan yet!

I have fair skin and every bronzer that I have tried was either a) too orange b) too shimmery which enlarged my pores and showed up my wrinkles or c) gave me a muddy look when the bronzer had pink undertones. I have hit the HG with this ones as it is neither of the above but gives me a perfect glow and I can build it up to the intensity I want without it looking too heavy or mask like. I use it on top of mineral foundation to give me a sunkissed look. I use it all over, not for contouring as I am over contouring. I usually put the slightest bit of Iniika blush in pink petal and I get the perfect summery glowy skin. Love the natural look it gives..

this bronzer worked fantastic on me. the packaging is cute but cheap, broke my top mirror after about a year of use. its beautiful on the skin and blends like a dream. also stays on and smells like chocolate!!!!!!!

I did enjoy this product. It smells great, not to pigmented but buidable, and works great with my pale skin. The only thing is that sometimes it would look reddish/orangy. kind of pricey but the product will last you a long time unless you are using it to bronze your neck and chest area.

Finally, a bronzer I can use,

This is a great bronzer for pale people who are looking for something really subtle, or to add a bit of dimensionality to their face rather than trying to look significantly more tan. I am somewhat pale, with yellow/golden undertones. Probably an NC15. For some background, I was previously using Physician's Formula Bronze Booster for stints, in medium to dark. It worked pretty well despite being medium to dark, but within the last year I started to notice it was making me look a bit sallow. It could be that the product was just getting too old, because I had it for a while. Anyways, after buying Milk Chocolate Soleil at Sephora online and before it was delivered, I was looking at swatches and reading reviews and getting a bit worried that it would be too light. I mention this because in all the reviews people talk about how it's for very pale people, and I want to make clear you don't have to be like Dita Von Teese-level white to pull this off, which was my concern being pale but not ludicrously so. Obviously the darker you are, the more subtle this is going to be. But don't be afraid that unless you're pale pale pale, this won't show up on you because that isn't th case. When mine arrived and I tried it out, I was immediately happy with it. Yes, it is extremely light. That's why it's important to note that if you're using a bronzer to look just-got-back-from-vacation tan, this probably isn't going to do that for you unless you're just about as pale as it gets. But for giving a healthy, subtle, but noticeable glow and getting a bit more shape to your face, it's fantastic. The shade comes off a bit more on the golden-brown side without being yellow (I'm very attuned to that after the Physician's Formula jaundice effect I described earlier). Certainly not orange. I've gotta break it down and say quite simply that since I started wearing this bronzer, I just look better. Which feels a bit dumb to mention since that's obviously part of the point of makeup, but I think we've probably all added a product to our makeup routine for a while before realizing it's not actually adding anything. This would also be good for those of you who are paler and want to get into bronzers or flirt with contouring but are afraid of doing it wrong. I was really freaked out by bronzers a few years back because they can look so conspicuously bad. This bronzer is hard to overdo. It's not insanely pigmented, but that's not a bad thing. Like this morning I went somewhat ham with this bronzer just for fun, and I didn't have any "good lord what was I thinking" mid-morning office bathroom mirror moment. Anyways, I'm super happy with it. I even like the scent, which reminds me of a chocolate Cupcake Surprise, if anyone remembers those dolls. The only thing I don't like is the gold packaging, which is kind of tacky tbh. Why not be a bit more consistent with the chocolate theme and make it look like a candy wrapper or a chocolate bar or something?

I'm really liking this product! Like the reviewer below posted, finally a bronzer for us pale people! I've been using this almost daily for the past 3 months now to give me a bit of color here and there during the winter (light dusting up near hairline, a quick and light countour-ish swipe for cheekbones, I've used it as a crease color and as eyeshadow) and it really adds depth, warmth and dimension to my face without it obviously looking like I've applied bronzer. This works so well! It's not garish, it doesn't go hideously orange on me, it's buildable and the color is quite flattering and lovely. Plus, I really appreciate that it's matte and has no shimmer, sparkle, or whatever. Myself, I've found that a little of this also goes a long way, so I'll be working through this compact for a while. But I would definitely repurchase when I run out. I also find the chocolate scent of the product cute- it's not something that drew me to the product at all, but it makes me think back to being young and when I used lip smacker, and loved scented pens and erasers, so I appreciate the nostalgia it gives me ;)

Love this bronzer so much! I alternate it with Guerlain teracotta sheer in sun blondes, and they are the only 2 bronzers I'll ever need. It has a peachy undertone that flatters my NC15-NC20 skintone, smells amazing and even tastes sweet! Love it. Looks beautiful with MAC Melba blush and a pop of Becca Moonstone on top of my cheekbones, the combo gives me that gorgeous sunkissed face... great look particularly for summer-fall. I say this would work for skintones up to NC25.